How much is Alan Ferguson Worth?

Alan Ferguson net worth: Alan Ferguson is an American music video director who has a net worth of $3 million. Alan Ferguson was born in Richmond, Virginia in August 1963. Ferguson has directed music videos for many artists. He has directed the videos "Hot n Cold" by Katy Perry, "Green Light" by John Legend ft. Andre 3000, "Pocketful of Sunshine" by Natasha Bedingfield, "Outta My Head (Ay Ya Ya)" by Ashlee Simpson, "Feelin' It" and "Who You Wit" by Jay-Z, "Drive By" by Train, "Dance For You" by Beyonce, and "Party" by Beyonce ft. J. Cole. Ferguson has directed seven music videos for Fall Out Boy including "This AIn't a Scene, It's an Arms Race", "Thnks fr th Mmrs", and "Dance, Dance". He has also directed three music videos for Gym Class Heroes including "Cupids Chokehold". Ferguson has also directed music videos for Janelle Monae featuring Miguel, Tiesto, Nelly Furtado, Fefe Dobson, Miranda Cosgrove, Boys Like Girls, Chris Cornell, Panic! at the Disco, The Academy Is…, Jewel, The Isley Brothers, Mobb Deep, and 112. In November 2014 Alan married singer Solange Knowles. 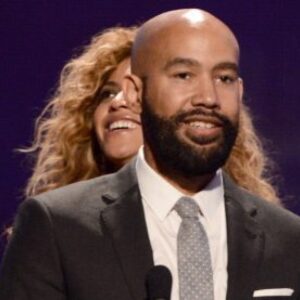