How much is Janelle Monae Worth?

Early Life: Janelle Monáe was born Janelle Monáe Robinson on December 1, 1985, in Kansas City, Kansas. Her mother, Janet (a hotel maid and a janitor), and her father, Michael (a truck driver), split up when Janelle was a toddler, and Janet later got remarried to a postal worker and military veteran. Monáe has a younger half-sister, Kimmy, and was raised in a Baptist household. Janelle's father battled crack cocaine and spent some time in prison, and Monáe has said that it left her with anxiety and abandonment issues. Janelle became interested in singing and performing at an early age and began singing at a local church. She performed songs from the album "The Miseducation of Lauryn Hill" at Juneteenth talent shows and won three consecutive years, and during her teenage years, she joined the Young Playwrights' Round Table at the Coterie Theater and started writing musicals.

After graduating from F. L. Schlagle High School, Monáe studied musical theater at New York City's American Musical and Dramatic Academy but dropped out after a year and a half to move to Atlanta, where she attended Perimeter College at Georgia State University. She started writing music and performing on campus, then self-released the album "The Audition" in 2003. She met producers/songwriters Nate Wonder and Chuck Lightning and later formed the Wondaland Arts Collective with them. After Janelle was fired from Office Depot for answering fan mail on a company computer, she wrote the song "Lettin' Go," which caught the attention of OutKast's Big Boi.

Career: Monáe performed on the tracks "Call the Law" and "In Your Dreams" on OutKast's 2006 "Idlewild" soundtrack and appeared on "Got Purp? Vol. 2," a 2005 album by the Purple Ribbon All-Stars. After Big Boi told Sean Combs about Janelle, Combs signed her to his Bad Boy record label in 2006. Monáe released the EP "Metropolis: Suite I (The Chase)" on August 24, 2007, and it reached #2 on the "Billboard" Heatseekers Albums chart. The track "Many Moons" earned a Grammy nomination for Best Urban/Alternative Performance, and Janelle opened for No Doubt during their 2009 tour. In May 2010, Janelle released the album "The ArchAndroid," and it reached #17 on the "Billboard" 200 chart and #4 on the Top R&B/Hip-Hop Albums chart. In 2011, she performed on fun.'s single "We Are Young," which was certified Diamond in the U.S. and earned Grammy nominations for Record of the Year, Album of the Year, and Best Pop Duo/Group Performance.

In 2012, Monáe became a spokesperson for CoverGirl, appeared in Sonos commercials, and performed at CarolinaFest in Charlotte to support President Obama ahead of the Democratic National Convention. Janelle released the album "The Electric Lady" in September 2013, and it peaked at #5 on the "Billboard" 200; the music video for the single "Q.U.E.E.N." (featuring Erykah Badu) was viewed four million times on YouTube within its first week. October 16th, 2013, was named "Janelle Monáe Day" by the Boston City Council, and Monáe performed on "Saturday Night Live" later that month. In 2014, she took part in a "Women of Soul" event at the White House, received the Harvard College Women's Center Award for Achievement in Arts and Media, and was named the 2014 Woman of the Year at the Celebration of Black Women gala put on by the Harvard College Black Men's Forum. In 2015, Janelle's independent Wondaland Arts Society label became Wondaland Records in a partnership with Epic Records.

In 2016, Monáe appeared on "This Is for My Girls," a track put together by First Lady Michelle Obama that also featured Kelly Clarkson, Missy Elliott, and Zendaya. Later that year, she played Teresa in the film "Moonlight" and portrayed NASA mathematician/engineer Mary Jackson in "Hidden Figures." Both films were nominated for Best Picture at the 2017 Academy Awards, with "Moonlight" taking home the prize, and Janelle performed the tracks "Jalapeño" and "Isn't This the World" on the "Hidden Figures" soundtrack. Monáe appeared on an episode of the anthology series "Philip K. Dick's Electric Dreams" in 2017 and released the album "Dirty Computer" in April 2018. The album reached #6 on the "Billboard" 200 and earned a Grammy nomination for Album of the Year. Also in 2018, Janelle's production company, Wondaland Pictures, signed a deal with Universal, and she appeared in the film "Welcome to Marwen." She played Marie Buchanon in the 2019 film "Harriet," and in 2020, she appeared in the horror film "Antebellum" and the biopic "The Glorias" and began starring as Jacqueline Calico / Alex Eastern on "Homecoming." 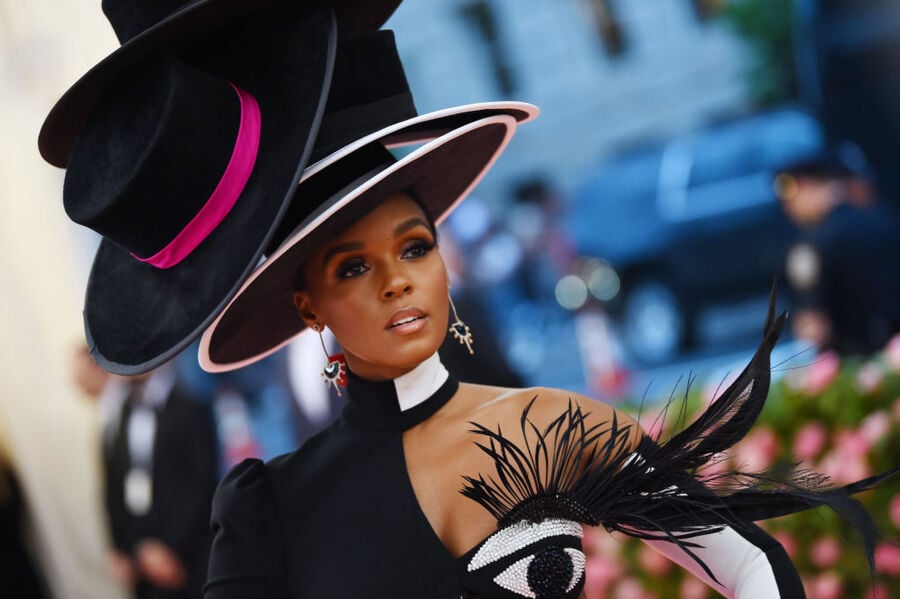 Personal Life: Janelle has said that she identifies with bisexuality as well as pansexuality and that she has dated both men and women. In January 2020, she tweeted the #IAmNonbinary hashtag and retweeted a "Steven Universe" meme saying "Are you a boy or a girl? I'm an experience." She later stated, "It resonated with me, especially as someone who has pushed boundaries of gender since the beginning of my career. I feel my feminine energy, my masculine energy, and energy I can't even explain." Monáe is an activist and founded the organization Fem the Future in 2016. In 2015, Janelle and her fellow Wondaland members teamed up for the protest song "Hell You Talmbout" to encourage people to say the names of African-Americans who have died as a result of police brutality or racial violence. Monáe performed at the Women's March in 2017 and spoke about the "Time's Up" movement at the 2018 Grammys.

Awards and Nominations: Monáe has been nominated for dozens of music awards, including eight Grammys, four BET Awards, four "Billboard" Music Awards, and two Brit Awards. Her "Q.U.E.E.N." video earned her an MTV Video Music Award for Best Art Direction, an NAACP Image Award for Outstanding Music Video, and a Soul Train Music Award for Video of the Year. In 2010, the ASCAP Awards honored Janelle with the Vanguard Award, and "I Like That" was named one of the Top R&B/Hip-hop songs of 2019. She has won two "Billboard" Women in Music awards (the Rising Star Award in 2013 and the Trailblazer of the Year in 2018), two Black Girls Rock! Awards (the Who Got Next Award and the Young, Gifted & Black Award), an Essence Award (the Black Women in Music Award), a GLAAD Media Award (Outstanding Music Artist), two Queerty Awards (Queer anthem for "Pynk" and Badass), and a "Variety" Breakthrough in Music Award.

For her acting, Monáe won a Breakout Performance award for "Moonlight" and "Hidden Figures" from the African-American Film Critics Association, and the two films also earned her a Rising Star Award from the Black Film Critics Circle Awards and a Virtuoso Award at the 2017 Santa Barbara International Film Festival. She won Outstanding Breakthrough Performance, Female for "Hidden Figures" at the 2017 Black Reel Awards, and the Women Film Critics Circle Awards honored her with an Invisible Woman Award for "Harriet" in 2019 and gave Janelle, Taraji P. Henson, Octavia Spencer, and Kirsten Dunst a Women's Work/Best Ensemble award for "Hidden Figures" in 2016. She has shared several awards with her "Moonlight" castmates, including a Film Independent Spirit Award and a Gold Derby Award, and the "Hidden Figures" cast won a Screen Actors Guild Award. Monáe has also received two Hollywood Film Awards: Song of the Year for "What is Love" from "Rio 2" and the Spotlight Award for "Hidden Figures."

Real Estate: In April 2020, Janelle paid $3.9 million for a 3,403 square foot home in the Hollywood Hills. The home is actually two houses that are connected by a shared breezeway, and the property includes an outdoor kitchen, swimming pool, wet bar, and outdoor claw-footed bathtub. 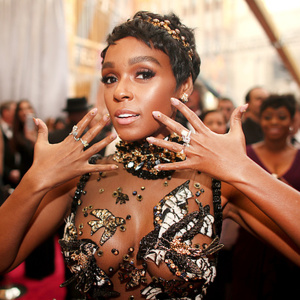