What is Kevin Spacey's Net Worth?

Kevin Spacey is an American actor, director, screenwriter, and producer who has a net worth of $30 million. Although he is a controversial figure today, Kevin Spacey is undoubtedly one of the most talented actors of his generation. A number of roles in theater, television, and film productions have won him considerable praise and countless awards.

Spacey's real name is Kevin Spacey Fowler, and he was born on July 26th, 1959 in South Orange, New Jersey. He was raised alongside two siblings by his mother, a secretary, and his father, who was a technical writer. When Kevin Spacey was four, the family moved to California. Speaking of his father, Kevin Spacey admitted he was physically abused, and that his dad was a Nazi-sympathizing racist.

In grades 10 and 11, Kevin Spacey attended military school. In his senior year, he moved to Chatsworth High School where he joined the school's theater production of "The Sound of Music." After graduating, he started using the name Spacey. He also moved to New York City to attend the Juilliard School. While he studied there from 1979 to 1981, Kevin Spacey tried to break into the stand-up comedy scene.

Spacey found early success in theater. After a small role in a Shakespeare play, he appeared in the Broadway production of "Ghosts" in 1982. Further roles came in "The Misanthrope and Hurlyburly." By 1986, he had established himself in the New York theater world with roles in Broadway productions of "Sleuth" and "The Seagull." His real breakthrough came later that year with a role in the critically acclaimed production of "Long Day's Journey Into Night."

After a brief foray into the television world with "Crime Stories," Spacey turned his attention toward film. While he tried to gain a foothold in Hollywood, he continued to appear in a range of plays, including "Lost in Yonkers" in 1991. He won a Tony Award for his performance. He also appeared in TV series such as "L.A. Crime" and "The Murder of Mary Phagan."

Kevin Spacey's first big film role came when he appeared in "See No Evil, Hear No Evil" in 1989. His acting talents were soon recognized, and he established a reputation as an enthralling character actor in series like 1989's "Wiseguy" and in films like 1992's "Glengarry Glen Ross." Critics began to take notice after he appeared in movies such as "The Ref" and "Swimming With Sharks," and he eventually won an Academy Award for Best Supporting Actor with a role in 1995's "The Usual Suspects."

That year, he also made one of his most iconic film appearances in "Se7en" as a serial killer. The next year, he made an equally memorable appearance in "A Time to Kill" as an attorney. In 1998, he took a prominent voice acting role in the animated film "A Bug's Life." In 1999, Kevin Spacey established himself as one of Hollywood's most talented stars with an incredible performance in "American Beauty," winning an Academy Award for Best Actor and a star on the Hollywood Walk of Fame.

Spacey continued to win Tony Awards for theater performances during this period and started the 2000s with roles in "Pay it Forward" and "K-Pax." In 2006, he proved to be a perfect choice for the role of Lex Luthor in "Superman Returns." He also appeared in 2008's "21."

Although he was intimately involved with theater over the next few years, the 2010s were all about "House of Cards" for Spacey. Starting in 2011, Spacey played Frank Underwood until 2018 when he was forced to leave the cast due to sexual assault allegations. During his time on the show, Spacey won countless awards and was nominated for many more. Starting in 2013, he also started working as a producer on the show, earning a peak salary of $20 million per year. In 2011, Spacey also took the role of the antagonist in the film "Horrible Bosses." In 2018, he appeared in "Billionaire Boys Club." 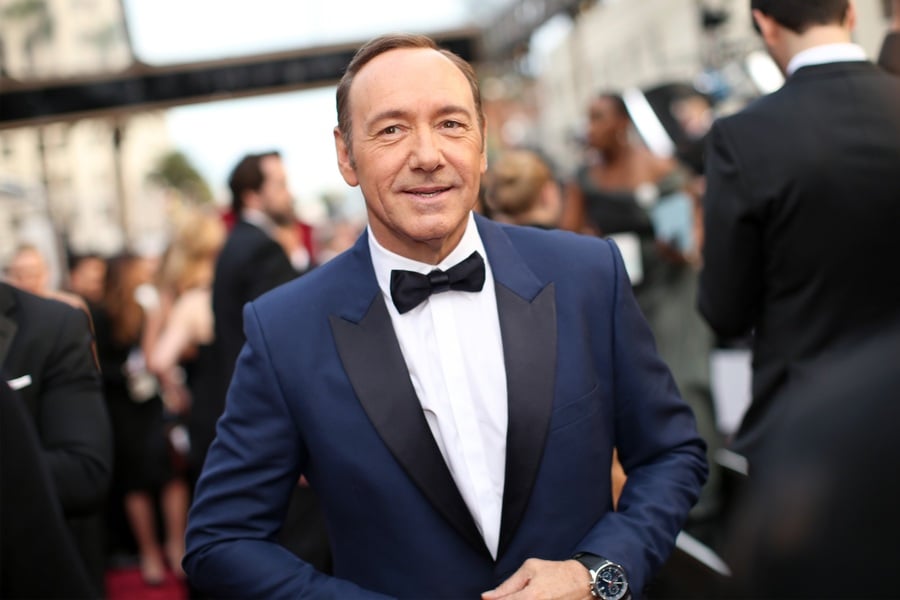 In 2017, Kevin Spacey was accused of making sexual advances towards a 14-year-old boy back in 1986, when Spacey was 26. Spacey issued a public statement that suggested alcohol was to blame, but allegations kept coming. In total, 15 similar stories surfaced, suggesting Spacey had a long history of this kind of behavior. Many of the people who came forward had sons who were connected with the entertainment industry, including the Old Vic theater. Representatives of the Old Vic stated that 20 people had complained and three had reported Spacey to the police.

As a result, the production of "House of Cards" came to a halt, and the final season was shortened to just eight episodes. In addition, many of Spacey's films had to be reshot with different actors when he was asked to leave the cast. Later, he was abandoned by his agent and his publicist.

In 2018, more allegations continued to pour in, and it was clear that Spacey's reputation had been sullied permanently. In 2019, a man who had allegedly been groped by Stacey committed suicide. That year, a total of three people with ties to Spacey died. Although Spacey has been through various court cases for sexual assault and criminal assault, all of the cases have been closed with no legal penalties for the actor.

In January 2019 Media Rights Capital, the production company behind "House of Cards" sued Kevin. In it's lawuit, MRC alleged Kevin:

"breached provisions of both the Acting and Executive Producing Agreements that set standards for his workplace conduct, including by breaching MRC's Harassment Policy.

MRC's lawsuit sought compensation FROM SPACEY PERSONALLY for the financial damages it incurred for having to scrap the entire sixth season after filming two episodes. Furthermore, MRC claimed in the scramble to right the ship, it only had enough time to produce eight episodes for the sixth season, five fewer than Netflix ordered. MRC lost millions in licensing fees by not being able to deliver a full season.

In November 2021 Spacey was ordered to pay Spacey $31 million in damages and in August 2022 that judgement was upheld.

The award was broken out as $29.5 million in compensatory damages plus another $1.5 million in legal fees and other costs.

In 1997, Spacey created his own production company called Trigger Street Productions. In 2016, Trigger Street Productions was acquired by Relativity Media. Kevin Spacey has also worked as a director for various films. Additionally, he hosted "Saturday Night Live" on more than one occasion. Spacey has appeared in video games, most notably "Call of Duty: Advanced Warfare." In 2003, Kevin Spacey became the artistic director of the Old Vic Theater in London.

For many years Spacey mostly kept his private life under wraps. As he explained in a 1998 interview: "the less you know about me, the easier it is to convince you that I am that character on screen. It allows an audience to come into a movie theater and believe I am that person."

In October 2017, fellow actor Anthony Rapp alleged that Spacey had acted inappropriately to him when he was 14 years old. The allegation caused Spacey to release an apology. In his apology, he finally came out as a gay man. This confession was considered controversial because he "came out" in the same statement in which he apologized for making sexual advances towards a minor. In the eyes of many critics, his attempts to link his homosexuality with pedophilia were bizarre.