What was Chris Cornell's net worth?

Chris Cornell was an American singer, songwriter, and musician best known for his work as lead vocalist and guitarist of the rock bands Soundgarden and Audioslave. At the time of his death, Cornell's net worth was $40 million. He was born on July 20th1964 in Seattle, Washington and passed away on May 18th 2017 in Detroit, Michigan at the age of 52.

Cornell was raised in Seattle, Washington with his mother and five siblings. His mother is of Jewish descent and a self-proclaimed psychic. His father was of Irish Catholic descent and a pharmacist. As a child, Cornell took lessons for both the piano and guitar. He credited his exposure at a young age to Alice Cooper, Lynyrd Skynyrd, and the Beatles as influencing his early musical taste. He showed an aptitude for performance and consistent passion, putting on his first performance at school in the 6th grade. His parents divorced when he was a teenager, and his struggles with substance abuse began shortly after. His early teen years were marked by periods of heavy drug use then social isolation and sobriety. By the time he was 12, he had extensive experience using a variety of hard drugs. He quit school after the 8th grade and began working to help support his family. When he was 16, he learned how to play the drums and started playing around in local bands. During this period, he played a few shows with Kim Thayil and Hiro Yamamoto, with whom he would go on to form Soundgarden, but they didn't like each other enough at the time to form a band.

Cornell would end up reuniting with Thayil and Yamamoto later in 1984 to form Soundgarden. He played drums and did lead vocals until the group found their permanent drummer in Matt Cameron. Signed with the local recording label Sub Pop, Soundgarden released their debut EP Screaming Life in 1987 and a second album, Fopp, the following year. Soundgarden grew in popularity as Seattle's grunge music scene expanded, and they released Ultramega OK in 1988 with the independent label SST Records. Soundgarden was considered one of the "big four" to come out of the Seattle grunge scene along with Nirvana, Pearl Jam, and Alice in Chains. Their debut album earned them a 1990 Grammy nomination for Best Metal Performance.

Soundgarden reached widespread recognition with their 1991 album Badmotorfinger, which featured three successful singles. The music video to the single "Jesus Christ Pose" was met with controversy due to its religious overtones, and it was pulled from MTV after protest. In 1992, they received their second Grammy nomination for Best Metal Performance. Their fourth album, Superunknown, brought them international recognition and critical acclaim. Shortly after its release in March 1994, it topped Billboard's top 200. It reached quintuple platinum status in the US, triple platinum in Canada, then gold in the UK, the Netherlands, and Sweden. The album won the band two Grammy's, a third nomination, as well as an MTV Video Music Award.

The group's fifth album Down on the Upside was released in 1996. Acoustically, the work was more subdued than their previous work with fewer heavy guitar riffs, but it was nevertheless widely praised by critics. Commercially, it performed well and had three chart topping singles. It reached platinum status in the US, Canada, and Australia. The band's change in creative direction had not been taken unanimously, and tensions present before the albums production had intensified. They were criticized for their unenthusiastic performances on the album's tour, and Cornell openly expressed a dislike for the repetition of touring. Soon after its conclusion in 1997, the band split up. 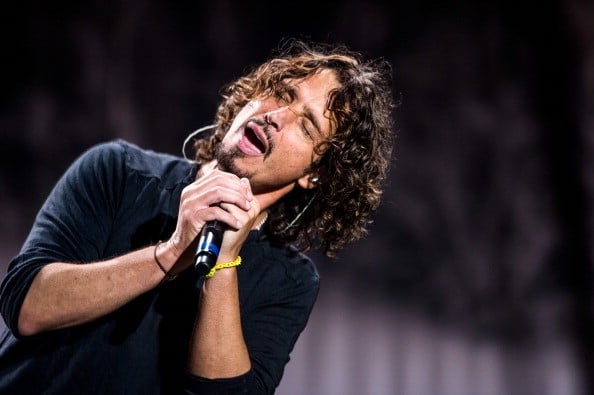 Cornell recorded an album on his own and released, Euphoria Morning, in 1999 and then went on his first solo tour. Cornell proved to be a standout success critically, and the lead single received a Grammy nomination. The album did not perform as well commercially although attendance throughout his solo tour was high.

While working on material for his second album, Cornell was contacted by the remaining members of the band Rage Against the Machine who had recently lost their lead singer. The group hit it off with Cornell, and Audioslave was formed. They wrote 21 songs in 19 days of rehearsing and released their debut self-titled album in late 2002. It was met with mixed reaction among critics but was a commercial hit with five hit singles. It reached triple platinum status in the US and sold well internationally. Prior to the start of their first tour, there was speculation that Cornell had checked into rehab and fears the tour would be cancelled. Although he did check into a treatment facility, he left and was able to continue with the tour as scheduled.

Their second album, Out of Exile, was released in 2005 and was praised critically. It debuted at number one on the charts and sold well in the US and overseas. Cornell stated that the album contained some of his most personal songwriting thus far. The group released a third album that was met with a lukewarm reception, and shortly afterwards in 2006, Cornell announced that he was leaving the band due to irreconcilable creative differences.

His first marriage was with former Soundgarden manager Susan Silver, and the pair had a daughter together in 2000. After the two divorced in 2004, he married publicist Vicky Karayiannis. The couple had two children together and started the Chris and Vicky Cornell Foundation in 2013 to help homeless youths.

Cornell was found dead in his Detroit hotel room in May of 2017. He performed just hours earlier and was only 52 years old. He had battled depression for his whole life and admitted to having had struggled with suicidal thoughts in the past. The corner ruled his death a suicide, but his widow doubted this conclusion. Although the only drugs found in his system were prescribed, they were present in higher levels than prescribed leading Vicky Cornell to believe his death was unintentional and to subsequently file a lawsuit against his former doctor for negligence in 2018.