The Biggest Financial Winners and Losers From The NBA Draft

Typically, the NBA Draft happens less than a month after the playoffs finish. After that, we have a long summer that includes free agency, the NBA Summer League for rookies and other young players, and training camps as teams head into the pre-season.

This year, due to the COVID-19 pandemic, the NBA Draft did happen soon after the conclusion of the NBA Finals. However, all of those other summer activities are being compacted into five weeks, with the season set to start on December 22.

As the rookies get acclimated to their new teams, let's take a look at the biggest winners and losers, strictly from a financial perspective.

The number one pick in a draft always comes with lofty expectations, but it also comes with the biggest paycheck. Anthony Edwards was never a sure bet for the top spot, but the Minnesota Timberwolves thought he was the best fit in the draft.

Rookie salaries are set on a sliding scale. Here's how it typically looks for first-round picks: The first three years steadily increase and are tied to a percentage of the salary cap and are impacted by where the player is drafted. The fourth year option is a percentage increase over the third season, and then teams have a qualifying offer for a fifth season. That fifth year is a certain percentage increase over the fourth year.

Players can also sign for up to 120% or for as little as 80% of the sliding scale. Every contract can look different, but most lottery picks (and many first-rounders) often sign for 120% so teams and players can get off on the right foot.

In Edwards' case, his fourth-year option and qualifying offers are actually the smallest in terms of percentage increase. But he's making more than anyone else, so the percentage difference isn't as big a deal.

Assuming he signs for 120% of the sliding scale, in his first four seasons, Edwards will make $43.3 million. For comparison, LeBron James signed a four-year deal in 2003 with the Cleveland Cavaliers for less than half of that, at just $18 million. James has done okay for himself since then, so don't feel too badly.

Patrick Williams averaged just 9.2 points and 4.0 rebounds in college, coming off the bench for the Florida State Seminoles. Those aren't typical numbers of a star, but at the No. 4 spot of the draft, the Chicago Bulls were going for potential.

If Williams can improve his shooting (he connected on 32% of his threes in college), he projects to be a solid 3-and-D player. He's also the youngest player in the entire draft, so he theoretically has the most time to blossom. Along the way, he'll earn $32.1 million during his first four seasons. 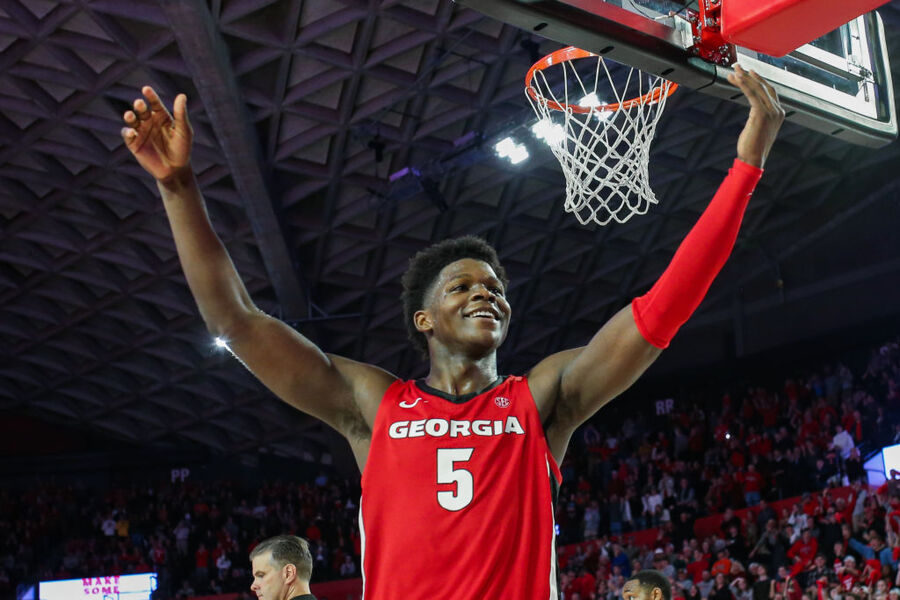 Coming into the year, Anthony was regarded as one of the top college players. However, thanks to injuries and a down season for North Carolina, Anthony's stock slid throughout the year. The Orlando Magic took him with the 15th pick, which is perhaps still a bit higher than some of the mock drafts had him, so he got a bump in salary that way.

But the other reason Anthony is a financial winner? The fact that Florida doesn't have any state income tax. Anthony's rookie deal will likely be for $15.9 million over four seasons. Compare his situation with Aaron Nesmith, who was taken one spot above Anthony by the Boston Celtics. They'll each pay 37 percent in federal tax, as well as accompanying "jock taxes" and other agent fees. But Nesmith will also lose 5%, about $520,000, of his income in state taxes. That's a significant chunk of change that Anthony will get to hold onto.

Plus, as far as we know, Anthony is the only player that got to party with Spike Lee on draft night. Hanging out with Lee is a cool bonus.

Arizona's Josh Green was generally considered a top 25 prospect in this year's draft, but the Dallas Mavericks took him at No. 18. He'll make $13.6 million in his rookie deal, though he'll also benefit from the same situation as Anthony.

Texas also doesn't have state income tax, so Green won't have to pay that additional money in taxes. The league is also looking at a possibly weighted schedule for the upcoming season, which will only be 72 games. The Mavericks could end up playing their division foes, the Spurs and Rockets, more than four times. That weighted schedule would mean a smaller jock tax for Green, as well.

Wiseman isn't here because he went No. 2 when he could have potentially been selected No. 1. Rather, it's the team he ended up on. The Golden State Warriors moved from Oakland to San Francisco, but they're still in California. That means Wiseman will pay 13.3% in state income tax. Combined with his federal tax, he'll lose more than half of his $39.6 million contract to taxes.

On top of that, the Warriors share a division with the Kings, Clippers, and Lakers. That's an extra six California games at minimum, and potentially more, depending on how the schedule shakes out. And that means a higher luxury tax for Wiseman.

The former San Diego State guard is already 22 years old, which made some teams hesitant to take him. As a result, a top 20 talent fell to the bottom of the first round, where the Toronto Raptors snagged Flynn at No. 29.

Had he been taken with the 20th pick, Flynn would project to make $12.5 million his first four seasons in the league. Instead, he'll make $10 million over four years.

There's good news for Flynn, though. He's in a solid situation — he'll almost always have a solid backcourt mate in Kyle Lowry or Fred VanVleet, and the timing works out that he could replace Lowry after his rookie deal ends. That would likely include a big payday for Flynn.

The same day of the NBA Draft, Klay Thompson suffered a season-ending Achilles injury. It's a devastating injury for anyone, but especially for someone that cuts and moves around the court as much as Thompson does.

Instead of trading their pick or using it to take a shooter (which would have been a reach at the No. 2 spot), the Warriors selected a big man in Wiseman. As a result, they spent a trade exception to acquire Kelly Oubre Jr. Thanks to the luxury tax, an NBA rule that forces teams to spend additional money for every dollar above the salary cap, the Warriors will pay $82 million simply to roster Oubre Jr. next season.

It's not an ideal situation at all, but the timing of the injury was so close to the draft the Warriors likely didn't have time to adjust. And it'll cost them a ton of money.