By Falling From The First To Third Pick, Jabari Smith Will Miss Out On Millions Of Dollars

Another NBA Draft is in the books, and right from the jump, this one provided some surprises. By most accounts, the Orlando Magic were all set to take Jabari Smith out of Auburn with the number one pick. However, shortly before the draft, the tide started to turn. When NBA commissioner Adam Silver announced who the Orlando Magic had selected, it wasn't Smith — instead, it was Duke's Paolo Banchero.

Banchero was so certain the Magic were going to select Smith that he didn't even meet with the team for an interview or a workout. But as the start of the draft drew closer, Banchero started hearing rumblings that anything could happen.

"I didn't find out, though, that I was actually getting picked until about 20 seconds before the commissioner got on the stage," Banchero said. "I didn't even have time to really think about it or anything. It just kind of happened. I can't believe it, but I'm ready. I'm ready."

So, just how much money will Banchero gain from going number one overall? And how much will Smith lose by falling to the Houston Rockets at number three? 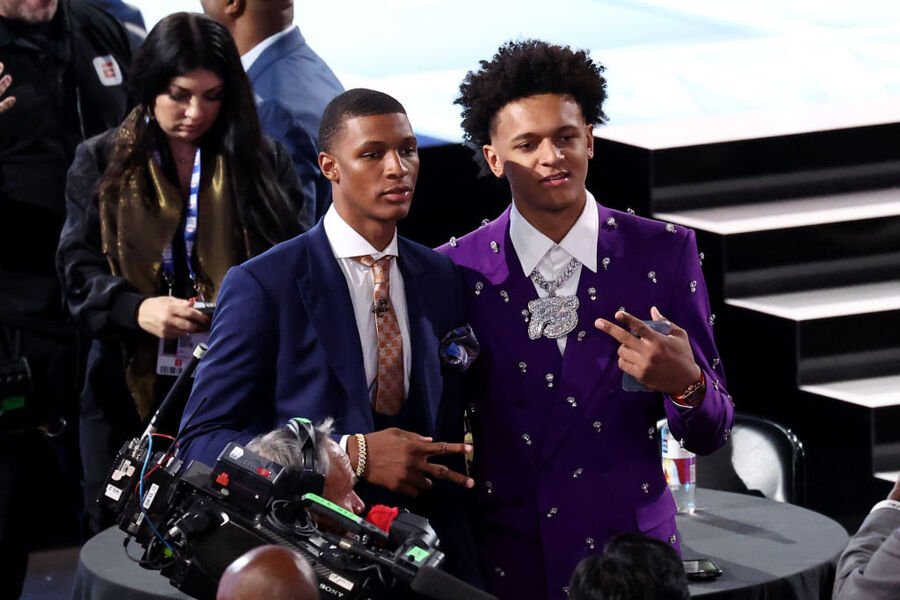 NBA rookie salaries are offered on a sliding scale based on draft position. Each pick from 1 to 30 has a base salary level. Teams can then sign the players for anywhere between 80% and 120% of that rookie scale.

Already, Smith is missing out on about $1.7 million. But that's just year one.

First-round rookies are guaranteed at least two years on their contract, with team options on both the third and fourth years. It's typically too early to give up on a player after just two seasons, so most teams will pick up that third-year option.

Where things get a bit more complicated is in the fourth and fifth seasons of these rookie deals. The fourth-year option is a percentage increase over the third-year salary, while the fifth year can be a qualifying offer, which is a percentage increase over the fourth-year salary. In both cases, the percentage rises with each pick — so Banchero actually has the smallest increase of anyone in the draft, albeit with the highest salary. If teams plan to re-sign their players after four seasons, they'll usually offer a larger contract extension instead of making a qualifying offer.

It's a lot of complicated math, but let's run through the hypothetical for the sake of it. If the top three teams all pick up the fourth-year options and fifth-year qualifying offers for the top three picks, the Magic will pay Banchero $57,629,959, the Thunder owe Holmgren $51,639,926, and Smith will get $46,481,150 from the Rockets.

To be fair, none of these are bad contracts, per se. It's still nice to make an average of more than $9 million per season; the median salary for last year was about $4.34 million, so Smith will essentially be earning double that over the duration of his deal. But it's possible Banchero will make about $11.2 million more than Smith does during his rookie contract.

And to add even more complexity to things, many teams take advantage of the ability to sign players for up to 120% of the rookie scale. For example, Cade Cunningham, last year's number one pick, received a salary of a little more than $10.5 million from the Detroit Pistons, which was nearly 120% higher than last year's rookie scale. These types of moves make sense. After all, these are potentially franchise-changing players, and teams want to start off on the right foot. If the Magic and Rockets go the same route the Pistons did and offer contracts that are 120% higher than the rookie wage scale, Banchero would make $69,155,950 compared to Smith's $55,777,381 — a difference of about $13.4 million.

To sum it up, by essentially swapping places — many mock drafts had Banchero going third to the Rockets — Banchero will make somewhere between an extra $5.6 million and $13.4 million. That's money that won't be going into Smith's pockets.

Aside from Banchero, one other big winner of the draft was former Duke coach Mike Krzyzewski. After his final year coaching the Blue Devils, Coach K saw five of his players get selected: Banchero, Mark Williams (No. 15), AJ Griffin (No. 16), Wendell Moore Jr. (No. 26) and Trevor Keels (No. 42). Not a bad night!

While all players will owe federal taxes and will be in the highest federal tax bracket, there's a silver lining for both Banchero and Smith in terms of where they landed. Florida and Texas don't have a state income tax, so going to the Magic and the Rockets will save both players some extra money. By comparison, Holmgren will owe 5% of his annual salary in state income taxes.

Of course, all the players in this draft have the potential to earn big deals with future contracts. Still, Smith has to be a little disappointed to watch millions of dollars vanish off the table.