What is Lionel Messi's net worth?

Lionel Messi is an Argentinian-born professional athlete who is often regarded as the best soccer player in the world. Lionel Messi's net worth is $600 million. Lionel Messi earned the majority of his net worth as a striker and winger for FC Barcelona. On August 10, 2021 it was announced that Lionel would move from Barcelona to Paris Saint-Germain. He also plays for the Argentina National Team. During his time with Barcelona, Lionel scored 672 goals in 778 games. On December 18, 2022 Lionel and the Argentina National team won the World Cup.

Lionel Messi is likely the highest-paid soccer player in the world and definitely one of the highest paid athletes in the world overall. His earth-shattering 2017 contract with Barcelona gave Messi an average base annual salary of $168 million. He also earns roughly $40 million per year from endorsements, which meant under that contract he was making around $200 million per year.

Despite what you might have read in some lower quality sources, Lionel Messi is NOT A BILLIONAIRE. By the time his contract Barcelona was over, with endorsements he earned north of $1.3 billion. By our count he has earned around $900 million in salary to date and $400 million from endorsements. Some outlets misread that stat and declared him a "billionaire". His next contract after the 2020 season will easily be one of the largest sports contracts in history and will likely bring his career earnings up to $1.5 billion by the time it completes.

He was reportedly willing to accept a 50% pay cut to stay with Barcelona, but league rules forbade this from happening. Even at a 50% pay cut, Barcelona's salaries would have equated to 110% of club revenue, when league rules require that number to be 70%.

When he was at his peak with Barcelona, Lionel Messi was easily the highest-paid soccer player in the world. In 2017 he signed a contract with Barcelona that paid a base salary of $168 million. His contract numbers were a closely-guarded secret for several years but in January 2021, Spanish newspaper El Mundo published the leaked contract details. Under a previous contract, his annual base salary was $44.68 million.

In August 2021 Lionel signed with Paris Saint-Germain. His initial contract is a two-year deal that works out to $75 million per year before taxes, roughly $40 million after taxes. Messi's contract also allows him to earn additional bonuses based on milestones and a cut of jersey sales.

Being as he is one of the most famous and recognizable athletes in the world, Messi has been sponsored by Adidas since 2006. He is their leading brand endorser. He was originally signed with Nike at age 14 but switched to Adidas. In 2008, Messi had a long-running signature collection of Adidas boots, and received his own sub-brand of boots called Adidas Messi. 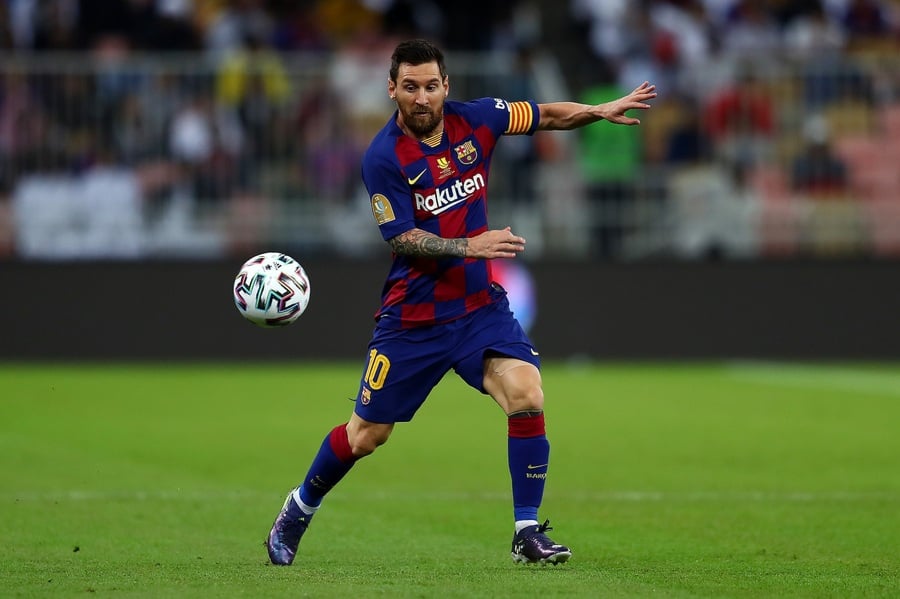 Messi was born in Rosario, Argentina on June 24, 1987.  His father, Jorge Horacio Messi was a factory steelworker and his mother, Celia Maria Cuccittini was a part-time cleaner. He has close to his two older brothers, Rodrigo and Matias, and a sister, Maria Sol, and the family would constantly play soccer together along with their cousins Maximiliano and Emanuel Biancucchi, both of whom went on to become professional footballers as well. Messi joined the Rosario soccer club when he was just six years old and played for Newell's Old Boys.

When Lionel Messi was ten, he was diagnosed with a growth hormone deficiency, and his father could no longer afford medical treatment for him. Newell's agreed to contribute but later took back their promise. The Sporting Director of FC Barcelona, Carles Rexach, offered to pay the medical bills if Messi could move to Spain. With Lionel father's approval, Rexach drew up a contract on a paper napkin and the family moved to Barcelona in February 2001. They moved into an apartment near Camp Nou, the club's stadium. Messi suffered homesickness after his mother and siblings returned back to Rosario while he stayed in Barcelona with his father. After a year, Messi was enrolled in the Royal Spanish Football Federation where he became a part of the "Baby Dream Team", Barcelona's greatest collection of young soccer players.

At the age of 17, Lionel Messi made his league debut against RCD Espanyol and became the third-youngest person ever to play on FC Barcelona. At that time he was also the youngest player to ever score for Barcelona. During the 2005-2006 season, Messi began being paid as a first-team member and also got his Spanish citizenship. He also made his debut in the Spanish First Division league. Messi received a standing ovation during his first match after he scored alongside superstar Ronaldinho. Out of his seventeen League appearances, he scored six goals. He scored one goal in six for the Champions League. In 2006, Messi became the youngest Argentine to play and score in the FIFA World Cup.

After the World Cup, In the 2006-2007 season, Messi was injured with a broken metatarsal, which took three months to heal. He was back in the game against Racing Santander, as a second-hand substitute. In March of that season he scored a hat trick against Real Madrid, which made him the first player since Ivan Zamorano to do so in the El Clasico. In the 2007-2008 season, Messi led Barcelona into the top four of La Liga. He won the nomination, as a forward, for a FIFA ProWorld XI Player Award and the Marca newspaper named him the best player in the world. Other newspapers followed and stated that Messi should be awarded the Ballon d'Or. He finally won his first in 2009, at age 22, and went on to win three more in a row each year. He also obtained an Olympic Gold Medal in the 2008 Summer Olympics. In 2012, he set the La Liga and European records for most goals scored in a single season. This sealed his fate as Barcelona's all-time top scorer. The next two seasons, Messi, now the team captain for Barcelona, finished second for the Ballon d'Or behind career rival Cristiano Ronaldo. In 2014, Messi led Argentina to the finals in the World Cup, for which he also won the Golden Ball. Messi announced his retirement in 2016 but reversed his decision and led Argentina to qualification for the 2018 FIFA World Cup. They also finished third at the 2019 Copa America. In 2019, Messi secured a record-breaking sixth Ballon d'Or.

On December 18, Lionel and his Argentina teammates defeated France in the 2022 World Cup final. Not including penalty kicks, Lionel had two goals in the game which went to over time and then a shootout. 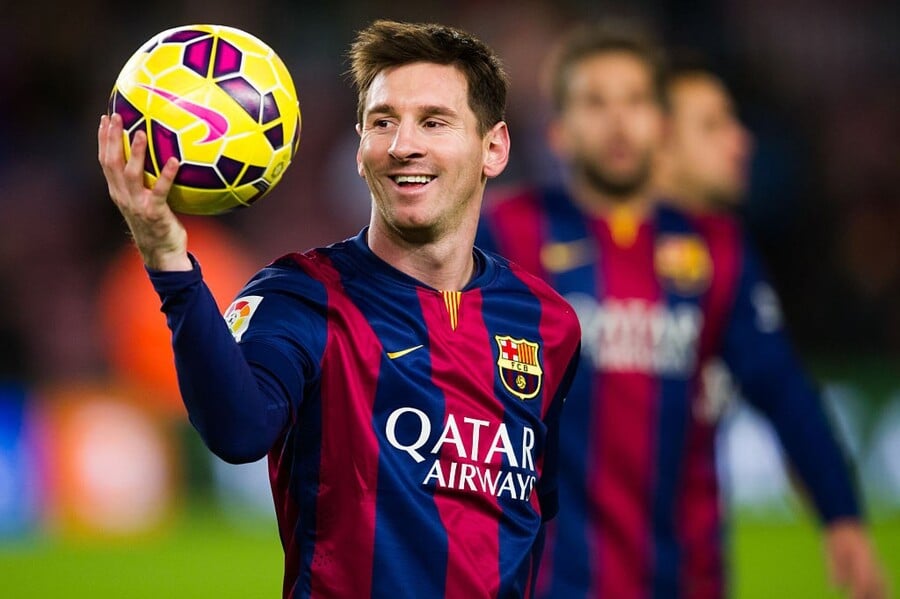 Messi is the founder of the Leo Messi Foundation, which helps better opportunities for underprivileged children regarding education and health care. He started the charity in 2007 following a visit to a Boston children's hospital, an experience that he has said deeply changed him. His foundation, with the help of Herbalife, helps to pay for medical treatment, transportation and recuperation for children diagnosed with major medical problems. Messi is also the Goodwill Ambassador for UNICEF since March 2010. He completed a field mission for UNICEF, traveling to Haiti to bring public awareness to the plight of the country's children following the recent earthquake.

Lionel also does individual fundraising activities such as global football matches raising money for various charities. Messi financially supports many youth football clubs in Argentina such as Sarmiento, Rosario Central, Newell's, River Plate, and Boca Junior. At his boyhood club Newell's, Messi funded construction of a new gym and dorm inside the club stadium in 2012. His former coach there is employed by the Messi Foundation and works as a talent scout for young players.

In March 2020, Messi made a $1 million dollar donation to help fight the spread of coronavirus. In addition, Messi and his fellow Barcelona Football Club teammates took a 70 percent cut in their salaries during the COVID-19 emergency. They did this so that no Barcelona workers would have their wages docked during the global emergency.

Messi has been with Antonella Roccuzzo, a fellow Rosario native, since 2008. They have known each other since they were five years old. They confirmed their romance publicly in January 2009. Messi and Roccuzzo got married in Rosario in June 2007. The couple has three children: Thiago (b. 2012), Matero (b. 2015), and Ciro (b. 2018). Messi is still very close to his immediate family members, especially his mother. He has her face tattooed on his left shoulder. His professional affairs are run mostly as a family business, with his father having been his agent since Messi was 14. His older brother Rodrigo handles his publicity.

In 2009 Messi paid $2 million for a home in a Barcelona neighborhood called Pedrables. He then spent millions on renovations and upgrades. The home is estimated to be worth $7 – $10 million today.

In November 2019, Lionel paid $5 million for a condo in Miami. In April 2021 he paid $7.3 million for the entire ninth floor of a different building in Miami.