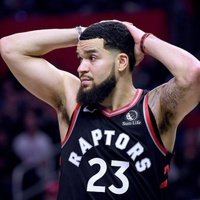 Fred VanVleet net worth: Fred VanVleet is an American professional basketball player who has a net worth of $20 million. He is best known for winning an NBA championship with the Toronto Raptors.

Fred VanVleet was born in Rockford, Illinois in February 1994. He is a 6'0″ shooting guard and point guard. VanVleet played for Auburn High School. He played his college basketball at Wichita State where he was three time First-team All-MVC, a three time AP Honorable mention All-American, a two time MVC Player of the Year, and a third-team All-American. Fred VanVleet went undrafted but signed with the Toronto Raptors in 2016. He won the NBA D-League championship with the Raptors 905 in 2017. VanVleet won the NBA championship with the Toronto Raptors in 2019. In 2020 he signed a four year contract extension with Toronto for $85 million. During his first four NBA seasons he averaged 10.5 points per game.