What is Arnold Schwarzenegger's net worth?

Arnold Schwarzenegger is an Austrian-American bodybuilder, model, actor, businessman, and politician. He is one of the most-famous actors in the world and at times has been the highest-paid person in the entertainment world.

As of this writing Arnold Schwarzenegger has a net worth of $450 million.

At the peak of his career, he consistently earned $20-30 million per movie. During his career, Arnold has earned hundreds of millions of dollars in film salaries. Since his earliest days in the US back in the 1970s, he has poured his earnings into a variety of investments, notably real estate. Arnold's real estate portfolio alone is worth over $100 million.

Arnold Schwarzenegger is a prime example of how much you can accomplish with blind, raw, "take-no-prisoners" ambition.  After establishing himself as an Austrian bodybuilding champion in the early 60s, and winning the title of "Mr. Universe" in 1967 and 1968, he moved to the US with the dream of becoming an actor, and next to no English-language ability.  Over the next nine years, he improved his English, earned his Bachelor's degree, wrote a bestselling book, and won just about every bodybuilding title he could.  He began acting in the early 70s, and won a Golden Globe for his work in his second film.  However, it took until 1982's "Conan the Barbarian", before audiences really took notice of him.  From there, it was a short trip to "The Terminator" franchise, a massively successful career as an action star, a politically savvy marriage to Maria Shriver, the niece of John F. Kennedy, and finally eight years as Governor of California.

Arnold Schwarzenegger was born on July 30, 1947 in the tiny village of Thal, Austria. His father Gustav was the local chief of police and his mother was a homemaker. In 1960, Schwarzenegger's football (soccer) coach took him to the local gym and introduced the 13 year old to the world of body building. His father originally wanted the young Arnold to become a police officer. His mother wanted him to attend a trade school. Arnold knew he was destined for something very different outside of their small Austrian village. After learning that some recent winners of the Mr. Universe competition went on to have successful acting careers in Hollywood, Arnold immediately set his sights on becoming the most famous professional bodybuilder in the world.

In 1965, Arnold won the Junior Mr. Europe Contest. In 1967, at the age of 20 he became the youngest person to win the Mr. Universe title. Arnold would go on to win the title three more times. Even with all of his success as a bodybuilder, Schwarzenegger still found time to attend business school in his spare time.

In September 1968, at the age of 21, Schwarzenegger moved to America with $27,000 to his name, all of which was saved up from winning competitions. In today's dollars $27,000 in 1968 is equal to $182,000 after adjusting for inflation, so it was no small sum. Soon after arriving in Hollywood, Arnold began making small investments in real estate. He bought a small plot of land in Palmdale, California that was rumored to soon become the new home of a supersonic airport. Though this first investment flopped, Arnold was undeterred. He took his remaining funds and borrowed $10,000 from his trainer at Gold's Gym in Venice, California to buy an apartment building. The purchase price was $214,000. A year later he sold the building for $360,000. He then traded up to a 12 unit building, followed by a 36 unit building, followed by a 100 unit building. Each time Arnold sold a building, he would pour the profits into the next venture to avoid taxes and increase his potential future return. By the time he was 25 years old, Arnold had become a real estate millionaire. This all happened well before he was well-known actor.

Today, Arnold owns a vast real estate portfolio made up of commercial properties primarily in Southern California. Not including his personal homes, the portfolio is worth north of $100 million.

In 1970, he was awarded his first "Mr. Olympia" title, which he would go on to win several more times during his career. After winning Mr. Olympia, Arnold was given his first big break in the film business when he was cast in the feature film "Hercules in New York". Arnold's fame became even more well known in 1977 after the release of the bodybuilding documentary "Pumping Iron".

His fame continued to grow with movies like "Conan the Barbarian" but his career didn't really take off until he was cast in the 1984 blockbuster "The Terminator". He earned $75,000 for his work in The Terminator, which went on to earn $80 million worldwide. After Terminator, Arnold's career was launched into the stratosphere. He followed up with hits like "The Running Man", "Red Heat", and "The Predator". He even dabbled in comedy with Ivan Reitman's 1988 film "Twins" which co-starred Danny Devito.

In the 1990s, Arnold returned to his role of the Terminator with his friend and director James Cameron. The two would even go on to even more success with "True Lies". Schwarzenegger rounded out the 90s with movies like "Last action Hero", 1996's "Eraser", and finally "Batman and Robin". 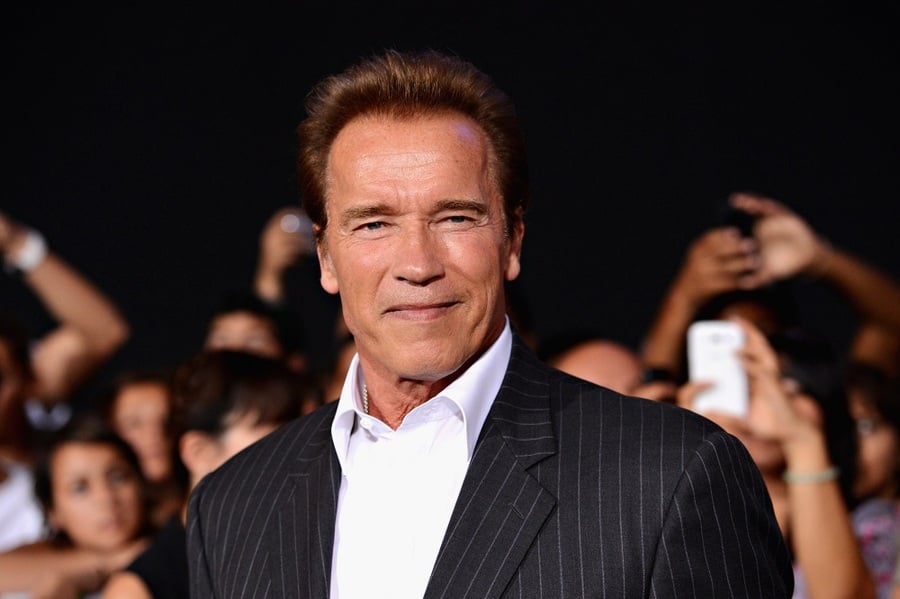 For the 1988 movie "Twins", Arnold, Danny Devito and director Ivan Reitman all agreed to take zero salary from the studio in exchange for owning 40% of the film (13.33% each). The movie was a smash hit and went on to earn more than $215 million worldwide at the box office alone. It was also a hit on VHS and on cable. In a March 2014 interview, Arnold claimed that he earned more from "Twins" than any of his other movies throughout his entire career. He said the same is presumably true for Reitman and Devito. Assuming Arnold and Danny and Ivan each made $35-40 million from the movie in 1988, after adjusting for inflation that's equal to earning $70-$80 million The trio would go onto reunite in the film "Junior".

In 2003, Arnold negotiated an upfront salary of $29.25 million PLUS a 20% royalty on gross profits over $380 million for "Terminator 3: Rise of the Machines". The movie went on to earn $433 globally, bringing Arnold's total paycheck up to an estimated $35 million.

During his career to date, Arnold has earned at least $400 million from film salaries alone, before taxes. 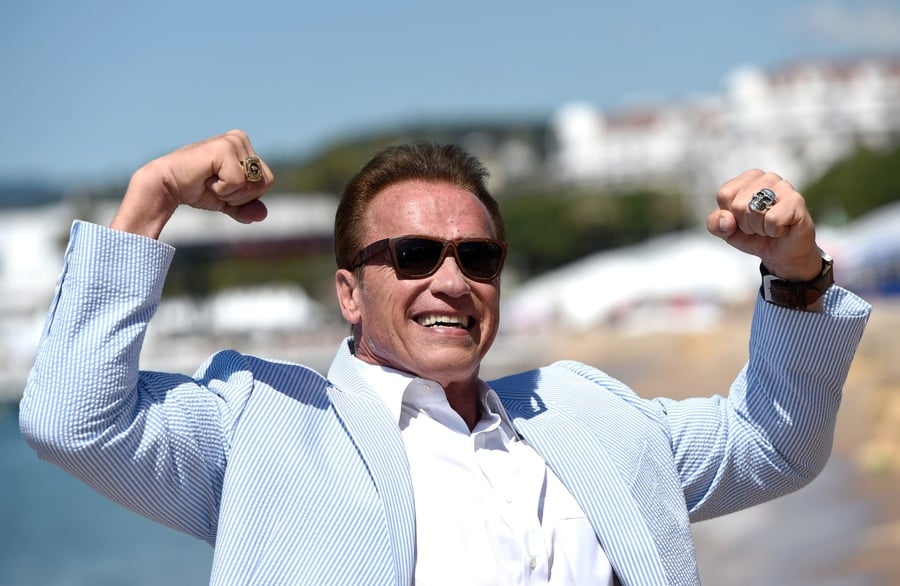 Schwarzenegger has been a long time member of the Republican Party. He even appeared at the 2004 National Republican convention making a speech on why he became a republican. In 2003 he shocked the nation when he announced on "The Tonight Show" that he was running for Governor of California. Arnold served as Governor from 2003-2011.

In the run up to his election, Arnold released financial disclosures that pegged his net worth in 2003 at $200 million. The same disclosure showed his prior year earnings topped $26 million and his federal tax bill was $9.2 million. He runs all movie income through an LLC called Oak Productions Inc. which is based in Santa Monica, California. Oak Productions is based in a building located at 3110 Main Street, a commercial property with roughly a dozen tenants in a prime location. Arnold owns the entire building.

Arnold would later claim that by serving as Governor for eight years he lost $200 million in potential movie wages.

Arnold was married to television news personality Maria Shriver, niece of President John F. Kennedy, from 1986 to 2017. They have four children together including Katherine (who would later marry actor Chris Pratt), and model Patrick.

Arnold and Maria's relationship ended in 2011 after news broke that he had fathered a son 14 years earlier with the family housekeeper. Their divorce took six years to settle. Arnold kept their longtime family home in Brentwood while Maria use his funds to acquire a new home nearby. They maintain joint ownership of family vacation properties in Sun Valley, Idaho and Hyannis Port, Massachusetts.

In 2002 Arnold and Maria paid $4.8 million for a roughly 6-acre property in LA's Brentwood neighborhood. Located within a gated community which Dr. Dre also calls home, Arnold's home is a 14,500 square-foot mansion with ocean views, a tennis court, pool and plenty of privacy.

Arnold Schwarzenegger has a net worth of $400 million. He is one of the highest-paid actors of all time, having earned hundreds of millions of dollars in film salaries during his career. He is also a highly successful real estate investor with a portfolio worth at least $100 million.