Not An NBA Lottery Pick? It Could Be Better To Get Drafted In The Second Round, Instead

Another NBA Draft is in the books, and teams across the league are excited to see how their new additions will fit. Some teams took the obvious pick at their position, while others swung for the fences. It's impossible to know who will actually end up working out until several years down the road, but we do know one thing pretty well: the NBA rookie scale.

Here's how it works: thanks to the CBA, every first round draft pick has a set amount of money they can make for two years, with team options for the third and fourth year. The pay scale is based on draft position for the first three years, while the fourth year is calculated based on a percentage of the third year. The player can sign for anywhere between 80 and 120 percent of their pay scale, though it's pretty rare to see a player agree to a deal for less than 120 percent.

By going No. 1 and No. 2, respectively, Markelle Fultz and Lonzo Ball – who is basically a package deal with his father LaVar – are the big financial winners of this year's draft. Fultz is set to make more than $33.7 million through his first four years in the league, while Ball will make a bit more than $30.1 million. That, of course, is assuming the Sixers and Lakers sign their new franchise players to four-year deals, which seems like a near certainty.

Picks 3 through 6, which this year included Duke's Jayson Tatum, Kansas's Josh Jackson, Kentucky's De'Aaron Fox, and Florida State's Jonathan Isaac, all will comfortably make more than $5 million a year on their respective deals, too. In fact, Kentucky grads as a whole fared very well in the draft. Fox, Malik Monk, and Bam Adebayo will make a combined $48.9 million from their rookie deals. 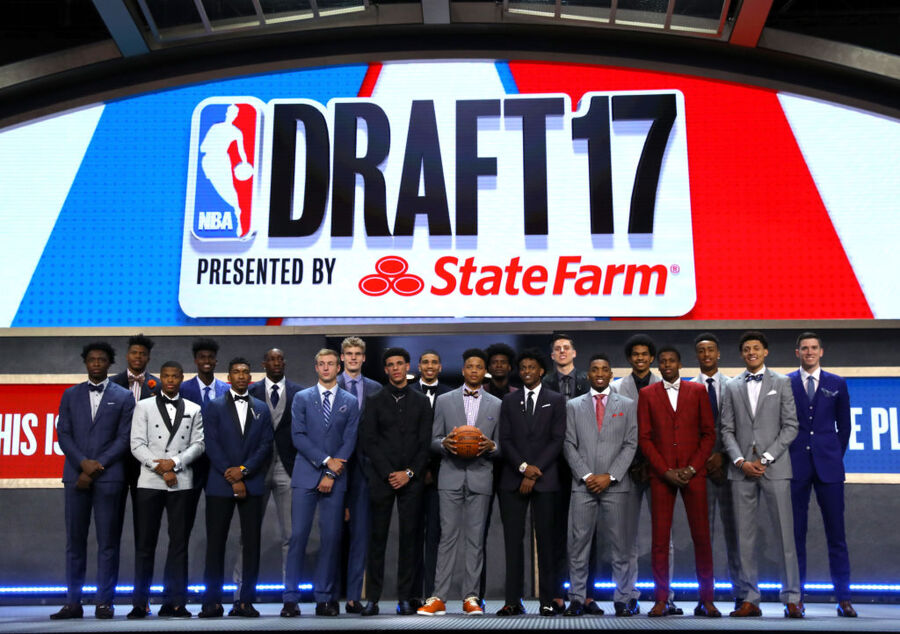 The rest of the lottery continues at a fairly consistent pace as 7th pick Lauri Markkanen will make at least $8.3 million and could earn more than $18.3 million over four years. Frank Ntilikina, selected right behind Markkanen, will get more than $7.6 million over his first two seasons, with the potential for about $16.8 million in the next four years. No. 9 selection Dennis Smith Jr. will make about $7 million in his first two years, with the potential for $15.4 million – or more than $1 million per win he had last season at North Carolina State – over four seasons. Rounding out the top ten, Zach Collins will make nearly $6.7 million his first two years, with his rookie deal maxing out at a little more than $14.7 million. The Blazers traded up to draft Collins, packaging the 15th and 20th picks to send to the Kings.

But there's not an enormous drop off between even the 15th and 30th picks in the draft. No. 15 selection Justin Jackson, one of the players the Kings traded for, can make $5.1 million over two seasons and about $12.0 million over four. No. 30 pick Josh Hart, who will join Ball in Los Angeles, will take home slightly more than $3 million in his first two seasons and could make up to nearly $7.6 million over four years. Every pick in between will make somewhere between what Hart and Jackson earn.

Rookies with star potential can make additional money off the court through endorsement deals. With such a limited pay scale, it's wise for agents and rookies alike to seek other deals to make extra money. Agents, in particular, look for opportunities off the court, since they don't make a percentage of their clients' rookie deals. It's not until their second contract that they really see a pay day.

That raises the interesting idea, then, that it could actually be more beneficial for a player to be taken in the second round instead of later in the first. Second-round players have unguaranteed contracts, which means a team can cut them at any time without financial penalty. But if a player bets on himself and performs well, it could lead to a big pay day down the line.

A recent example of this is K.J. McDaniels, who was taken 32nd by the Sixers in the 2014 NBA Draft. McDaniels didn't like the terms of the deal Philadelphia offered, so he and his agent renegotiated his contract to a one-year, $507,000 deal. That was a paltry rookie wage, sure, but it ended up paying off in the long run. Though he was traded mid-season to the Houston Rockets, he impressed the team enough that the Rockets offered a three-year, $10 million deal after McDaniels' rookie season. That three-year deal ended up being worth more than 12 first-round picks will make after four years, assuming their teams all sign them to four-year contracts.

Of course, the move could backfire, too. The $7.9 million that Caleb Swanigan can make from the Blazers over four years is guaranteed. Even if Portland only signs him to a two-year deal, he's still going to make $3.2 million, regardless of if he gets traded, released, or misses 150 games due to injury. Second-round players don't have that luxury. But a player in the right situation who knows he'll get a decent shot and a solid amount of playing time might be better off turning down the initial deal he receives and restructuring his contract to offer more flexibility.

No matter where they're selected, every player will be hoping to perform well enough in their first few seasons so that they can stick around in the league. Once they hit their second contract, that's when they start seeing some real leverage, both in where they can play and how much money they can make.