By Brian Warner on May 8, 2015 in Articles › Entertainment

Prior to Saturday's fight, the world record for Pay-Per-View purchases for any live event was 2.4 million. That record was set in May 2007, when Floyd Mayweather fought (and defeated) Oscar De La Hoya. For their efforts, De La Hoya earned a then-record setting $52 million from the fight. Floyd took home a career-high $25 million.

Floyd would go on to earn $170 million defeating his next six opponents. Then, in September 2013, Floyd fought Saul "Canelo" Alvarez. But this fight was special. By this point in time, Floyd was no longer under contract with any promoter. He had previously been under contract with Bob Arum and then had a co-promoting partnership with Oscar De La Hoya. But by now, Floyd was calling all of his own shots. Instead of simply being paid to show up, Floyd organized every aspect of the event and fronted all the costs. The bout went off on September 17, 2013.

When it was all said and done, 2.25 million people (second highest PPV sales of all time) paid $69 to watch Floyd defeat Canelo by decision after the full 12 rounds. Floyd's payday? A record-smashing $75 million. Of that figure, $41 million was paid up front, and another $34 million came from the PPV back end.

As we all know, Floyd defeated Manny Pacquiao last Saturday in what was easily the most highly anticipated boxing event of all time. When the fight was first announced, PPV sales were projected to break 3 million for the first time ever. At $100 a pop, that's $300 million in revenue right there. When you add in the live gate, foreign rights, merchandise, etc… analysts predicted that the May-Pac fight would generate $400 million in total revenue. At that level, Mayweather and Pacquiao were projected to take home $180 million and $120 million, respectively.

Well, it turns out everyone's projections and predictions were wrong. Dead wrong. 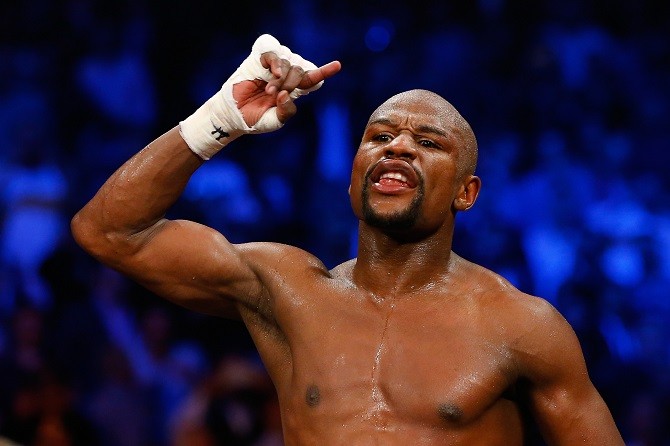 As of this writing, DirecTV is reporting 1.15 million PPV sales, AT&T U-Verse and Verizon FIOS are both reporting around 300,000, Dish Network is reporting 500,000. When you add it up, these outlets alone are reporting a combined 2.25 million Pay Per View buys. At that level, the fight would already be tied with the Saul Alvarez fight for second highest PPV sales of all time. And we haven't even counted any of the cable company sales yet!

In other words, as of this writing, the Mayweather Pacquiao fight is projected to have been bought by 5.625 million people. At $100 a pop, that's $562 million in PPV revenue alone. Tack on another $75 million from the live gate, $35 million for foreign rights and roughly $10 million for sponsorships. That's a total gross of $682 million.

Here's a fun way to think about those earnings: The entire event didn't last much more than an hour. That means Floyd earned $4.7 million per minute, $78,000 per second.

Incredible! Keep checking back over the next days and weeks. We'll post all the updated PPV sales figures as they come in.