By Brian Warner on September 13, 2014 in Articles › Entertainment

Tonight Floyd Mayweather and Marcos Maidana face off for the second time. Maidana's purse has been doubled from $1.5 million to $3 million. Maidana also has the ability to earn a big bonus if Par Per View purchases hit certain milestones in his home country of Argentina. In the other corner, Floyd Mayweather will earn a Floyd Mayweather guaranteed minimum of $32 million for his work tonight. He could also earn much much more depending on the domestic PPV sales.

This $32 million payday bring's Floyd Mayweather's career earnings over the $400 million mark. $405 million to be exact. What's especially impressive about that statistic is the fact that Mayweather has earned that massive fortune in the last 8 years alone… off of just 12 fights. His highest payday so far is a tie. He earned $50 million when he fought Robert Guerrero and Saul Alvarez. 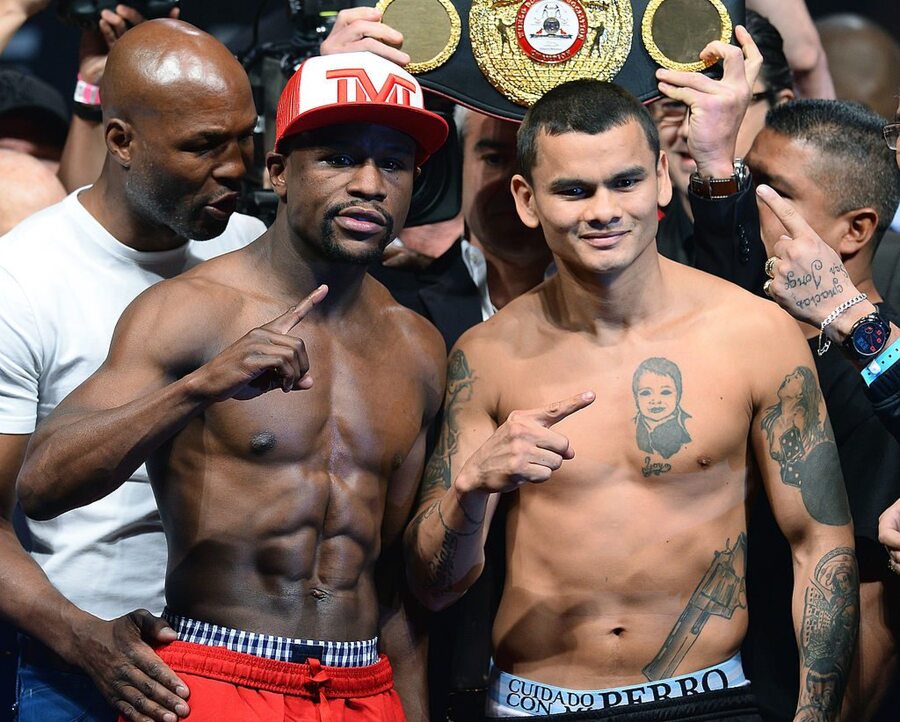 Here is a complete breakdown of Floyd's career earnings to date:

He's the highest paid athlete in the world year after year. In 2013, he earned approximately $104 million before taxes and fees. As of this writing, Floyd's overall personal net worth is $280 million. What's especially impressive about that $280 million figure is the fact that, unlike every other top earning athlete, Floyd essentially does not have any significant endorsements.

Floyd makes up for his lack of endorsements by having a highly creative and highly lucrative business model. Whenever Mayweather fights someone, he puts up all the money for the entire show, himself. He pays for the venue, the insurance, the vendors and even his opponent's purse, out of his own pocket. When Mayweather fought Saul Alvarez, he spent $15-20 million of his own money before a single punch was even thrown. He also put aside $40 million for himself as an appearance fee. The major risk Floyd is taking is that all these expenses occur before the fight happens. If there was a natural disaster like a hurricane, the fight would be canceled and Floyd would be out of luck.

On the other hand, when the Alvarez fight did go through as planned, more than 2.2 million households ordered it on Pay Per View for $65 which generated $150 million worth of revenue. Even after a large percentage was taken out for the distributors and costs, Floyd was still left with a $45 million bonus. And 100% of that money went directly into his bank account (after taxes). When you add Mayweather's $40 million appearance fee and his $45 million PPV bonus, you can start to understand why he makes $85 million for a single fight.