What is Floyd Mayweather's net worth?

Floyd Mayweather is a world-renowned American boxing champion and promoter. Floyd Mayweather's net worth is $450 million. That makes him the richest boxer of all time. Floyd's total career earnings, as of this writing, top $1.1 billion.

Floyd is 5th highest-paid athlete of all time and one of just six athletes whose career earnings have topped $1 billion. The other five are Michael Schumacher ($1 billion), Jack Nicklaus ($1.15 billion), Arnold Palmer ($1.35 billion), Tiger Woods ($1.65 billion) and Michael Jordan ($1.9 billion). What's perhaps most-impressive about Floyd's earning stats is that he managed to become the fifth highest-paid athlete ever with relatively scant endorsement earnings. By comparison, most of the highest-paid athletes in history earned the vast majority of their income through endorsement deals. Floyd earned more than a half billion dollars from just two fights. He earned $250 million in 2015 after fighting Manny Pacquiao. He earned $300 million fighting Conor McGregor in 2017.

During his peak boxing years Floyd was consistently (and by far) the highest paid athlete in the world. Despite having very few endorsement deals, Floyd can easily earn $150 – $300 million a year when he is fighting. Between June 2014 and June 2015, Floyd earned a mind-boggling $300 million. Between June 2017 and June 2018, Floyd earned a total of $300 million, mostly thanks to his fight against Conor McGregor that occurred in August 2017. Outside of the ring, Floyd typically earns $10 million from endorsements per year.

As a kid, Floyd's mother was addicted to drugs and his father was somewhat absent. His father primarily spent time with a young Floyd when he was old enough to go to the boxing gym. When his father was sent to jail, Floyd moved in with his grand mother. During this time, Floyd devoted himself to boxing. He dropped out of high school and became an amateur.

Floyd's first professional fight occurred on October 11, 1996. He knocked out his opponent, Roberto Apodaca, in the second round.

During his career, Floyd would go on to win an unprecedented six boxing championships in five different weight classes: Super Featherweight, Lightweight, Junior Welterweight, Welterweight twice and Super Welterweight. His professional boxing record as of this writing is an astonishing 50 wins and 0 losses. Of the 50 wins, 27 were by knock out.

He also earned around $2 million from his first 15 fights that proceeded the 2005 match against Arturo Gatti. Floyd has earned around $25 million outside the ring selling merchandise and from a handful of relatively small endorsement deals.

As of this writing, when you total it all up Floyd Mayweather's career earnings are $1.1 BILLION. 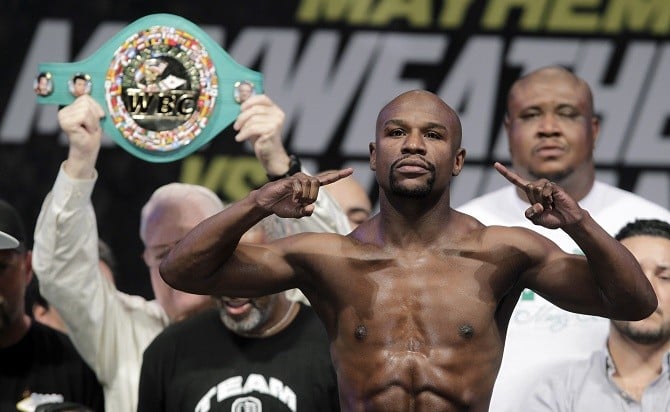 On March 13, 2009 Mayweather was scheduled to face the fiercest opponent of his career Manny Pacquiao. The bout was probably the most anticipated fight in a decade. At the time, pay per view revenues were expected to exceed $180 million. Of that $180 million, Floyd was to be guaranteed $25 million up front plus an additional $20-25 million on the backend. Unfortunately Mayweather and Pacquiao could not reach an agreement and the fight fizzled for many years. Floyd went on to defeat "Sugar" Shane Mosley on April 1st 2010, and Victor Ortiz in 2011. On May 5th, 2012, Mayweather defeated Miguel Cotto.

On May 4th, 2013, Floyd earned estimated $50 million ($32 million guaranteed) for beating Robert Guerrero. On September 14, 2013, Floyd earned $75 million ($41.5 million was guaranteed) when he faught Saul Alvarez. That set a record for the highest purse in boxing history. A record which will easily be beaten when Floyd finally faces off against Manny Pacquio on May 2nd, 2015.

Mayweather vs. Pacquiao finally took place on May 2nd 2015 in Las Vegas. It is expected to be the highest revenue-generating fight in boxing history. Floyd and Manny agreed to split all profits 60-40. Floyd earned $250 million off the fight. Pacquiao earned $150 million.

On August 26, 2017, Floyd Mayweather fought Conor McGregor in what was the highest-grossing Pay Per View boxing event in history. The event generated at least 5 million PPV purchases. When it was all said and done, the fight generated around $700 million in total revenue across all sources and left Mayweather with a paycheck of $300 million before taxes. As a Nevada resident, he did not pay any state income taxes on those earnings. He did pay around 40% of his earnings to the IRS. Actually he paid 40% of his earnings plus $22 million in back taxes that he owed related to his 2015 income. When it's all said and done, his after tax take was $160 million. When added to his previous net worth, Floyd ended the McGregor fight with a net worth of $560 million. 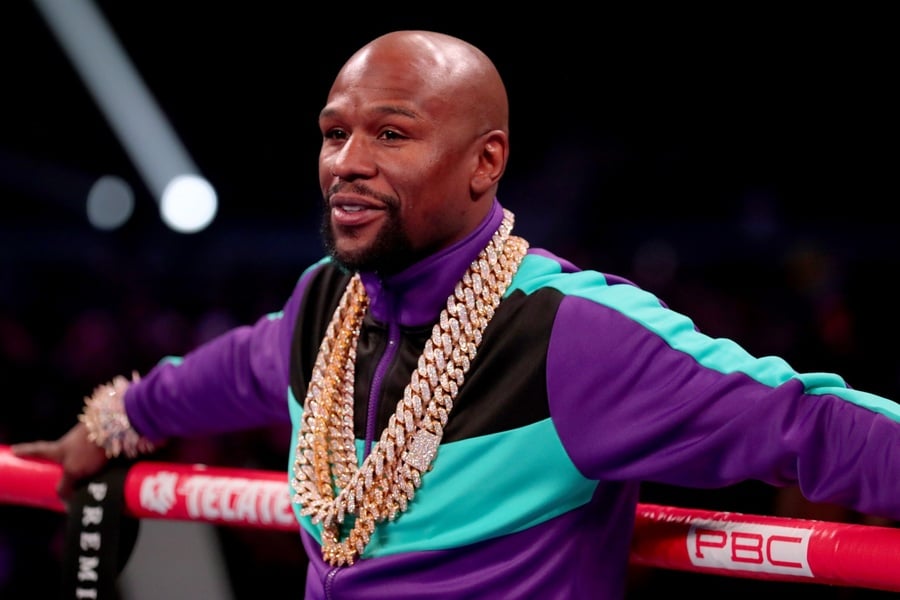 In 2007, Floyd was a contestant on Dancing with the Stars. They finished in ninth place. In 2008 Floyd earned $20 million to appear at WWE's WrestleMania XXIV.

He owns an apartment in New York City, the Mayweather Boxing Club in Vegas and a strip club in Vegas called Girl Collection.

Floyd owns dozens of high end cars. He once told an ESPN interviewer that he has $15 million worth of luxury cars sitting in his garage that have never been driven. Over the last two decades, Floyd has bought more than 100 cars from Towbin Motorcars in Las Vegas. He reportedly pays for his cars in cash. Some of his most notable car assets include a $5 million Koenigsegg CCXR Trevita, a $3.5 million Bugatti Chiron, THREE $2 million Bugatti Veyrons, a Bugatti Grand Sport Vitesse, a $1.4 million Pagani Huayra and a limited edition LaFerrari Aperta which is worth north of $1 million. This is just a sample of his incredible collection. Floyd owns many more Ferraris, Lamborghinis, Bentleys, Rolls Royces, Mercedes and more.

Floyd owns a $60 million Gulfstream G650 which he dubbed "Air Mayweather". He bought the jet for himself for his 41st birthday in 2018. He reportedly flew to Iceland just to take a photo for Instagram, on a dare. The plane is emblazoned with his name on the side and "50 – o" (his boxing record) on the wing tips.

Floyd actually owns two private jets. The second is a $30 million Gulfstream III. When he travels, Floyd reportedly flies in the G650 with his closest associates while "Air Mayweather II" follows with his entourage.

Floyd has not been shy about showing off his jewelry collection. He owns more than 40 extremely high-end watches. He has claimed that when he goes on vacation, he brings 30 watches and at all times is wearing at least $3 million worth of jewelry.

In 2015, Floyd paid an astounding $18 million for a single watch, made by Jacob the Jeweler. This watch features 239 emerald-cut baguette diamonds that are up to three carats each.  The watch is appropriately called "The Billionaire".

In 2014 Floyd made a substantial investment to become a partner in the real estate development firm SL Green. SL Green's CEO, Marc Holliday, announced Floyd's investment in December 2014. As of this writing, Floyd owns a minority stake in nine skyscrapers in the United States. One of those skyscrapers is One Vanderbilt, the tallest commercial building in the US.

Over the years Floyd has dodged allegations of financial problems. For example in March 2017 the IRS hit Floyd with a demand for $22.2 million in back taxes related to his 2015 income. If you want to be specific, the IRS claimed that he owed $22,238,255. If that's not crazy enough, Floyd claimed he didn't have enough liquid cash to cover the debt. A few months later, Floyd's lawyer filed paperwork assuring the IRS that their bill would be paid in full with interest and penalties directly from his Conor McGregor fight earnings. The IRS had demanded to be paid immediately, to which Floyd's legal team replied:

"Although the taxpayer has substantial assets, those assets are restricted and primarily illiquid. The taxpayer has a significant liquidity event scheduled in about 60 days from which he intends to pay the balance of the 2015 tax liability due and outstanding."

In February 2020, 50 Cent, Floyd's former friend and now bitter enemy, took to social media to claim that Floyd was broke and would soon need to step back into the ring to re-fill his coffers soon. These were unsubstantiated claims which Floyd was quick to refute over his social media. However, it must be said that Floyd's lifestyle costs an extraordinary amount of money to maintain. Between the houses, the cars, the jets, the entourage and more… he likely burns through tens of millions of dollars each year, at a time when he no longer has consistent significant income. He never wears a pair of shoes more than once and leaves behind all of his discards for fans, housekeepers and hotel staff. At all times, he travels with a 20 person entourage that is made up of friends, family members, bodyguards, a barber (even though his head is shaved) and a massage therapist who coincidentally happens to be a gorgeous female. Thieves broke into his house once and made off with $7 million worth of jewelry….

And we haven't even talked about Floyd's gambling habits. It's impossible to know how much money Floyd has won or lost gambling on sports. He frequently shows off extremely large wagers taken on sporting events throughout the year.

In 2002 Floyd was charged with two counts of domestic violence and one count of misdemeanor battery. He received a six-month suspended sentence and community service for this charge. In 2004 he was given a one-year suspended sentence after being convicted of two counts of misdemeanor batter battery. In 2005 he pleaded no-contest to a misdemeanor batter charge after kicking a bouncer. He received a 90-day suspended sentence. In 2011, Floyd was ordered to serve 90 days in county jail on battery charges. He also had to perform 100 hours of community service and attend a 12-month domestic violence program. He ended up serving 63 days in jail. While serving the sentence, Floyd petitioned to be released for medical reasons because he claimed the 800-calorie daily prison food menu was causing his muscles to waste away. He claimed his body needed 3000-4000 calories per day. The judge did not oblige. When Floyd was released, he was picked up by 50 Cent in a private jet with a suitcase filled with $1 million in cash.

Floyd Mayweather's net worth is $450 million. As of this writing he has earned more than $1.1 billion during his career. He earned $250 million in May 2015 fighting Manny Pacquiao. Floyd earned $300 million in August 2017 fighting Conor McGregor. 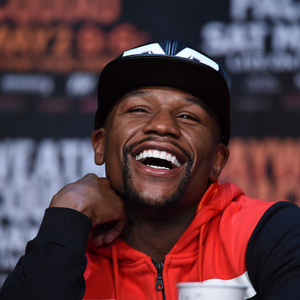