The 10 Most Expensive Instruments in the World

Anyone who has ever pursued a career in the arts knows how expensive it can be.  Lessons, equipment, coaching, performance fees, plane tickets, and studio and practice room rental can make the cost of pursuing the art you love, seem insurmountable.  For musicians, finding the right instrument with the right tone can cost hundreds of thousands of dollars.  However, most musicians would say the cost is worth it.  The sound produced by a well-crafted instrument can elevate a concert experience from great to extraordinary.  Here is a list of the 10 Most Expensive Musical Instruments in the World.  Though they all come with hefty price tags, most musicians would say these instruments are priceless.

Some instrument makers seem to have a magical touch, and Robert Bouchet was the wizard of handmade classical guitars.  He only produced 150 of the instruments his entire life.  Expect to pay a lot of money for the chance to play one.  One of his guitars includes his name, address, and the date he completed the work, inside the body of the guitar.  It set a world record when it was auctioned off in 2009.

Antonio de Torres is the grandfather of the modern classical guitar.  His designs have influenced all guitar markers who came after him.  He began signing his guitars in the mid-1800's.  However, the few he built before he started signing them have become the most sought after.

Batista Ceruti began building violins after leaving behind a successful career in textiles.  He made his instruments out of reasonably priced materials, and instead focused all of his energy on exquisite craftsmanship and detailing.  The result is that his violins have lasted 200 years or more, and his earlier pieces go for record sums at auction.

The Viola de Gamba is a rare instrument.  There are very few in the world, and none are more valuable than the one crafted by Pieter Rombouts.  The sound of the viola da gamba is so amazing, that it has not been digitally replicated successfully.  When pop artists want to include it in tracks, they have to hire a real person with the real instrument to lay down the sound.

A maker of multiple instruments, including cellos, violas, and double bass, as well as violins, Carlo Giuseppe Testore's instruments are a favorite of classical musicians around the world.  He produced most of his pieces from the late 1600s to the early 1700s, and collectors and musicians will pay huge amounts to have them.

The existence of a Gennaro Gagliano violoncello was under debate for sometime. Experts were finally brought in to determine whether the violoncello in question really did come from the hands of the celebrated instrument maker.  It did and it may be the only one he ever made.

Bertolotti da Sola made 60 violas over the course of his life, primarily during the 16th century.  Those instruments of his that have survived to this day are all worth nearly 1/2 a million dollars each.

Guitars made by C.F. Martin and Company are synonymous with country music.  Their steel string guitars are legendary, and their signature inlay work is recognized around the world.  In 1930, they made 15 OM-45 Deluxe Guitars, and famous musician/performers such as Roy Rogers snapped them up.  They now sell for incredibly large sums of money.

Sometimes it's not who made the instrument, but who played it that drives up the price.  Fender is world renowned for making great electric guitars.  Just about every major rock musician has played or owned a Fender Stratocaster at some point in their career.  Eric Clapton found three Fender Stratocasters in a shop in Nashville and bought them.  He then had a custom guitar built from the best parts of each instrument.  The result was his legendary guitar, "Blackie", and an auction price of nearly a million dollars.

For violin aficionados, there is next to nothing better than the sound of a violin crafted by Antonio Stradivari.  His instruments have grown in value over the course of the last few centuries, and one of his more popular pieces was a violin owned for many years, by Christian Hammer, a collector from Sweden.  It has changed hands multiple times.  The current owner forked over a record amount for it 2006. 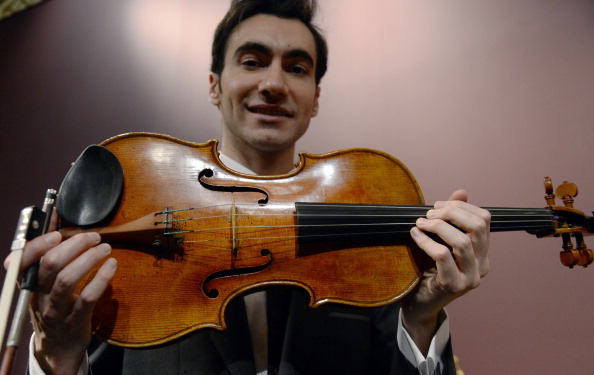 BERTRAND GUAY/AFP/Getty Images
Did we make a mistake?
Submit a correction suggestion and help us fix it!
Submit a Correction