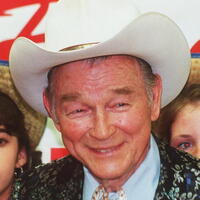 What was Roy Rogers' Net Worth?

Roy Rogers was an American actor and singer who had a net worth of $80 million at the time of his death in 1998. That's the same as $150 million today after adjusting for inflation. Roy Rogers was one of the most popular Western stars of his time. He appeared in upwards of 100 films and radio and television series, and had his own show called "The Roy Rogers Show" that ran on NBC in the 50s. On screen, Rogers often appeared alongside his wife Dale Evans; his sidekick George "Gabby" Hayes; his palomino horse Trigger; and his German Shepherd Bullet.

Roy Rogers was born as Leonard Franklin Slye on November 5, 1911 in Cincinnati, Ohio to Mattie and Andrew. Soon, he moved with his family on a houseboat to Portsmouth, where they bought land for the construction of a house. However, the Great Flood of 1913 put a wrench in the plans, and the family ended up living in their houseboat on the property instead. Later, in 1919, the family moved onto a farm near Lucasville. There, they created their own entertainment by hosting square dances for the neighbors. It was during this time that the young Rogers developed his singing and yodeling skills. Although he initially went to high school in McDermott, Rogers left to help his father at a shoe factory back in Cincinnati. The two later quit their jobs and packed up to California to stay with Rogers' older sister Mary, who had moved to Lawndale with her husband. The family eventually settled down in California in 1930.

In California, Rogers found work driving gravel trucks for a construction company. After the company went bankrupt, he found employment in Tulare picking peaches for Del Monte. Rogers went on to begin his music career when he performed on the "Midnight Frolic" radio show in Inglewood and joined the country music group the Rocky Mountaineers.

In the early 30s, Rogers and his associate Tim Spencer performed with a number of short-lived groups, including the O-Bar-O Cowboys and the International Cowboys. Rogers later joined Jack LeFevre and His Texas Outlaws. In 1933, he reunited with Spencer as well as his earlier associate Bob Nolan to form the Pioneers Trio. After the group added fiddle player Hugh Farr the following year, the Pioneers Trio became the Sons of the Pioneers. The group quickly gained popularity across the nation via short syndicated radio segments, and eventually signed a recording contract with the newly created Decca Records. Over the subsequent two years, Sons of the Pioneers recorded 32 songs for the label, including the classics "Tumbling Tumbleweeds" and "Cool Water." 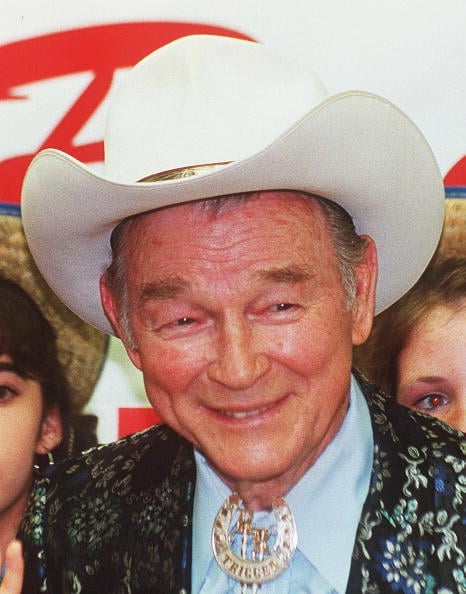 Rogers was prolific as a film actor throughout the 30s, 40s, and 50s, becoming one of the most iconic Western stars in Hollywood and the most popular singing cowboy next to Gene Autry. Most of his early films were directed by Joseph Kane, with many co-starring George "Gabby" Hayes. After landing his first leading role in 1938's "Under Western Stars," Rogers starred in such films as "Billy the Kid Returns"; "Come On, Rangers"; "Shine On, Harvest Moon"; "Rough Riders' Round-up"; "Southward Ho"; "Frontier Pony Express"; "Wall Street Cowboy"; "Jeepers Creepers"; and "Days of Jesse James." Rogers also had a supporting role in Raoul Walsh's "Dark Command," starring John Wayne, Claire Trevor, and Walter Pidgeon.

In the first half of the 40s, Rogers starred in "Young Buffalo Bill"; "Colorado"; "The Border Legion"; "In Old Cheyenne"; "Nevada City"; "Man from Cheyenne"; "Romance on the Range"; "Sunset Serenade"; "Song of Texas"; "Hands Across the Border"; "Song of Nevada"; and "San Fernando Valley," among many others. During this time, he started appearing in films alongside Dale Evans, who would become his wife. Rogers continued his prolific acting career throughout the latter half of the 40s and into the early 50s, with most of his films now being directed by William Witney and featuring the palomino horse Trigger. Notable credits include "Utah"; "Song of Arizona"; "My Pal Trigger"; "Out California Way"; "Apache Rose"; "Eyes of Texas"; "Susanna Pass"; "The Golden Stallion"; "Bells of Coronado"; "Trail of Robin Hood"; and "In Old Amarillo." Later, in 1975, Rogers made his final film appearance in "Mackintosh and T.J."

On the small screen, Rogers had his own Western television series, "The Roy Rogers Show," on which he starred alongside his wife Dale Evans. After originally running as a radio program, the series aired on NBC from 1951 to 1957. For the show, Rogers and Evans sang the famous theme song "Happy Trails." The pair reunited on the small screen in 1962 as hosts of the short-lived Western comedy variety program "The Roy Rogers and Dale Evans Show." Rogers later made guest appearances on the series "Wonder Woman," "The Muppet Show," and "The Fall Guy."

In 1933, Rogers wed his first wife, Lucile Ascolese; they eventually divorced in 1936. He next married Grace Wilkins, who propositioned him on a call to a radio station in Roswell, New Mexico. The couple adopted a daughter named Cheryl, and had a daughter named Linda and a son named Roy Jr. Wilkins passed away during the birth of the latter child in 1946. The following year, Rogers married actress and singer Dale Evans, whom he had met on the set of the 1944 film "Cowboy and the Señorita." The two were well known for their charity work on behalf of handicapped and homeless children; they also adopted a number of children of their own. Rogers and Evans lived on a 300-acre ranch in the San Fernando Valley, later moving to a 67-acre ranch in Apple Valley.

Rogers passed away from heart failure in 1998 at the age of 86. His wife passed away a few years later; both are interred at Sunset Hills Memorial Park in Apple Valley, California.