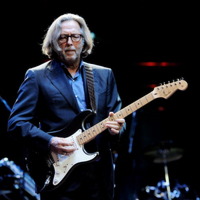 What is Eric Clapton's Net Worth?

Eric Clapton, CBE is a British rock musician who has a net worth of $450 million. Ranked #53 on "Rolling Stone" magazine's Top 100 Artists Of All-Time list and #2 on their list of the greatest guitarists, Clapton is a blues-rock guitarist, composer, singer, and songwriter who has been inducted into the Rock and Roll Hall of Fame three times (as a solo artist and with the Yardbirds and Cream).

With more than 100 million album sales, Eric is one of the best-selling musicians in history, and his 21 solo studio albums (most of which have been certified gold or higher) have spawned hits such as "After Midnight," "I Shot the Sheriff," "Wonderful Tonight," and the Grammy-winning acoustic version of "Layla." Clapton has won dozens of awards for his work, including 17 Grammys, and he was appointed an Officer of the Order of the British Empire in 1995, a Commander of the Order of the British Empire in 2004, and a Commandeur de Ordre des Arts et des Lettres in 2017.

Eric has obviously earned the bulk of his fame and fortune through his music career, but he also has significant real estate, art and vehicle assets. His car collection, which features some extremely rare Ferraris, is easily worth $50 million, perhaps $100 million. It's extremely difficult to put a value on his art collection, but consider this anecdote – in 2001 he paid $3.4 million for three Gerhard Richter paintings. He eventually sold them off one-by-one, for a total of $77.3 million.

Eric Clapton was born Eric Patrick Clapton on March 30, 1945 in Ripley, Surrey, England. When he was born, his mother, Patricia, was just 16 years old, and his father, Edward, was a 24-year-old Canadian soldier who Eric has never met. As a child, Clapton was told that Patricia was his sister and that her mother and stepfather were Eric's parents. When Patricia later married and moved to Germany, she left Clapton in England with his grandparents. Eric learned how to play guitar as a teenager after receiving one as a birthday gift, and his skills were so impressive that he was performing in pubs with fellow musician Dave Brock by the age of 16. He joined a British R&B group, the Roosters, at 17 and performed with them until August 1963; later that year, he played several gigs with Casey Jones & the Engineers. Clapton attended the Kingston College of Art but was expelled after his first year.

Eric joined the Yardbirds in October 1963 and stayed with the band until March 1965, leaving on the day the band released their first big hit, "For Your Love." In April 1965, Clapton joined John Mayall & the Bluesbreakers, left a few months later, rejoined the band in November, and quit again in July 1966. After leaving the Bluesbreakers, Eric joined Cream and released six albums and several hit singles with them, including "Sunshine of Your Love" and "White Room," before Cream disbanded in 1968. The following year, he formed Blind Faith with Steve Winwood, Ginger Baker, and Ric Grech, but the band was only together for seven months. Clapton then formed Derek and the Dominos, releasing "Layla," which would become one of his most popular songs, in 1970; the group disbanded in 1971 during the recording of their second album.

In 1974, Eric put together a touring band and recorded the album "461 Ocean Boulevard," which included his first #1 hit, a cover of Bob Marley's "I Shot the Sheriff." He took a break from music in 1982 to go to rehab and started working on the album " Money and Cigarettes" a few months after being discharged. In the 1980s, Clapton began composing film scores, winning a BAFTA Award for 1985's "Edge of Darkness" score. In 1992, he was nominated for nine Grammys, winning six (Record of the Year, Album of the Year, Song of the Year, Best Pop Vocal Performance, Male, Best Rock Vocal Performance, Male, and Best Rock Song), and released the "Unplugged" album, which was certified Diamond after selling 10 million copies. In 2000, Eric collaborated with blues legend B.B. King on the album "Riding with the King," which reached #1 on the US Top Blues Albums chart and #3 on the "Billboard" 200; the album also won a Grammy for Best Traditional Blues Album. In Clapton's long career, he has played more than 3,000 concerts in nearly 60 countries, and though he retired from worldwide touring in 2015, he continues to make new music, and he celebrated his 70th birthday with shows at New York City's Madison Square Garden and London's Royal Albert Hall. 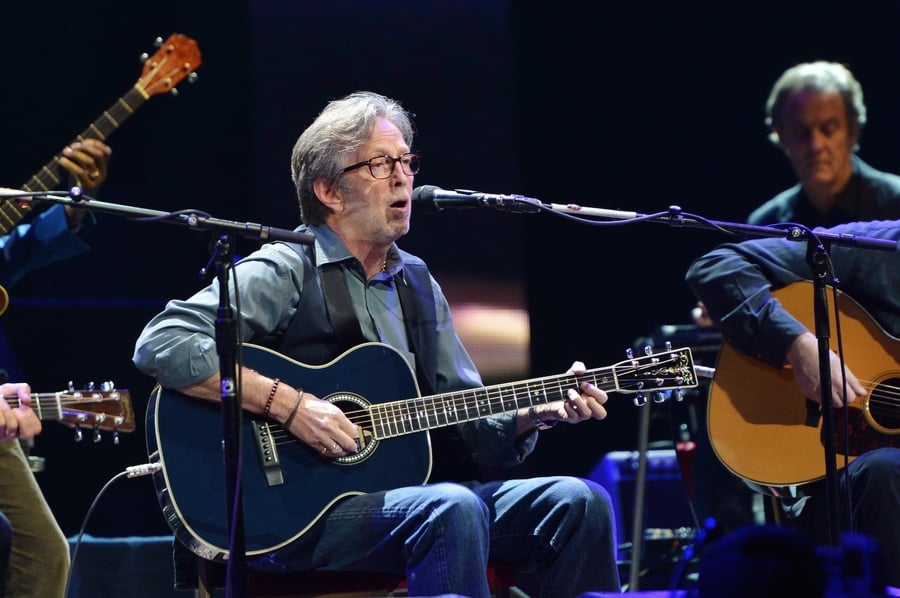 Eric married Pattie Boyd, who was previously married to his friend George Harrison, on March 27, 1979, and they divorced in 1989. Clapton has admitted that he abused Boyd, and he fathered two children with other women during the marriage; daughter Ruth was born in 1985, and son Conor was born in 1986. Sadly, 4-year-old Conor passed away on March 20, 1991, after falling out of an open window in a 53rd-floor apartment; Eric wrote the song "Tears in Heaven" about the tragedy. Clapton married Melia McEnery on January 1, 2002, and they have three daughters together: Julie (born in June 2001), Ella (born in January 2003), and Sophie (born in February 2005).

In the early 1970s, Clapton began a nearly two-decade struggle with alcoholism and drug addiction, and he has said that he used to spend $16,000 per week on heroin. He has been clean and sober since 1987, and he founded a substance abuse treatment facility, the Crossroads Centre, on the island of Antigua, in 1998. Eric was also on the board of directors of the treatment centers Clouds House (1993–1997) and The Chemical Dependency Centre (1994–1999). In 2013, Clapton was diagnosed with peripheral neuropathy, which causes pain in his legs and back, and he suffers from tinnitus as well.

Clapton has been nominated for 37 Grammys, winning 17, and he received the Grammy Lifetime Achievement Award in 2006. He has also earned three American Music Awards, a BAFTA Award, two Billboard Music Awards, a GQ Award, four Ivor Novello Awards, an MTV Video Music Award, two Primetime Emmys, and several other awards. In 1983, Princess Michael of Kent presented Eric with the Silver Clef Award, and he was inducted into the Blues Hall of Fame in 2015. He was inducted into the Rock and Roll Hall of Fame with the Yardbirds in 1992, with Cream in 1993, and as a solo artist in 2000, and he received a star on the Rock and Roll Walk in 2000. 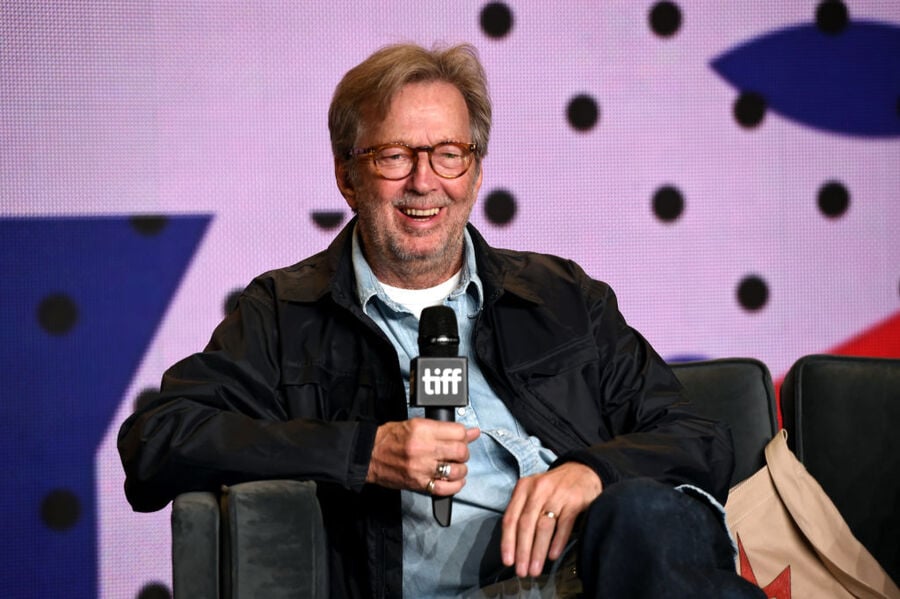 Eric has an extremely valuable collection of cars, notably Ferraris. His car collection is easily worth $50 million and could be worth as much as $100 million in the right market. According to his 2007 autobiography that he fell in love with Ferraris thanks to George Harrison. As he described:

"One day in the late 1960s, George Harrison arrived at my house in a dark blue Ferrari 365 GTC. I'd never seen one in the flesh before and my heart melted. At that point, it was like seeing the most beautiful woman on earth and I decided then and there that even though I couldn't drive, I was going to have one too. I had no license, and had only ever driven an automatic, so I set about teaching myself to drive using a clutch, in that Ferrari. I loved that car!"

Eric bought the 365 GTC from Harrison, painted it silver then in the early 1980s painted it back to its original white.

He owns dozens of extremely valuable cars, including at least 13 classic and rare Ferraris. Some examples from his collection include:

– Ferrari Enzo, one of only 400 built, potentially worth $3-5 million. Eric famously picked his Enzo up at the factory and drove it home, picking up a speeding ticket outside Paris for going 145 MPH in a 30 MPH zone.

Ferrari SPC-12 EC. Those letters literally stand for "Special Project Car #12 Eric Clapton". This one-off car was specially-built for Eric for just under $5 million. He even helped design the final product. It is arguably priceless today due to its rarity.

As we mentioned at the beginning of this article, Eric's art collection is very difficult to value. He has an extremely keen eye for art and has picked up pieces throughout his career for relatively pittances compared to what they could fetch today. For example the three Gerhard Richter paintings he bought at once in 2001 for $3.4 million and eventually sold for a combined $77.3 million. Other pieces in his collection include: