What is Neal Schon's Net Worth?

Neal Schon is an American rock guitarist, songwriter, and vocalist who worked with the bands Journey, Bad English, Journey, and Hardline. Neal Schon has a net worth of $40 million. Neal Schon is best known as founding member and lead guitarist of Journey, as well as for his work with the band Bad English. Neal Schon has carved out a remarkable career as one of rock n' roll's top virtuosos. He got his start in the late 1960s in the San Francisco Bay Area. At 15, Schon left home to join Carlos Santana's rock group Santana. Four years later, as Santana and his band split up, Schon teamed with Gregg Rolie to form Journey in 1973, a group he still leads today. On April 7, 2017, Neal Schon was inducted into the Rock and Roll Hall of Fame as a member of Journey.

Schon was born on February 27, 1954 on Tinker Air Force Base in Oklahoma. His parents were Matthew and Barbara Schon and he is of German and Italian ancestry. His father worked as a big band musician and composer and he also taught others how to play various reed instruments. His mother was a big band singer. Music was obviously a big part of Schon's life growing up and he began playing the guitar at the age of 10. He attended Aragon High School in San Mateo, California.

Schon's professional music career began early His skills on the guitar were quickly noticed and he received a number of invitations from bands who wanted him to join. At the age of 17, he joined Santana in 1971. He also played in the band Azteca during this time.

In 1973, he co-founded the band Journey along with Gregg Rolie. Journey went on to become a hugely successful band, primarily after the addition of lead singer Steve Perry. Schon played on 14 of Journey's studio albums. Some of Journey's biggest hits include "Don't Stop Believin" and "Open Arms." Journey's albums have gone gold and platinum multiple times and the band's music is often referenced and played in television shows and movies. 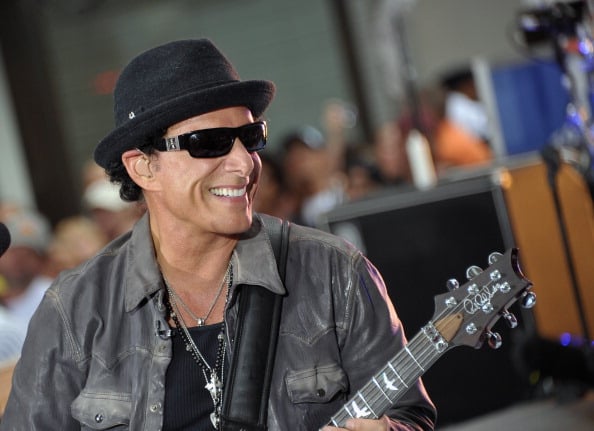 In addition to his career with Journey, Schon also collaborated with a number of other musicians and bands. He has worked with Sammy Hagar, Bad English, John Waite, and Hardline, among many more. He also was featured on one of Michael Bolton's albums and joined an all-star band along with Betty Davis and Larry Graham.

Schon has also recorded nine solo albums. He is well-known for his signature guitar playing style and the sound he produces from the instrument. He generally is described as a soulful player and has been inspired by the sound of musicians like Aretha Franklin and Gladys Knight and the guitar playing of Jimi Hendrix, Eric Clapton, and Carlos Santana. He typically plays on Gibson guitars and even inspired a limited-edition Gibson, the "Neal Schon Signature Model Custom Les Paul," of which Gibson only produced thirty-five total.

In September of 2011, Schon confirmed that he was in a relationship with Michaele Salahi. The couple had met years earlier when they dated in the 1990s. After spending a year together, Schon proposed to Salahi onstage curing a charity concert at the Lyric Opera House in Baltimore, Maryland. He proposed to her with an 11.42 carat diamond engagement ring.

In December of 2013, their wedding was broadcast on live TV. They were married at the Palace of Fine Arts in San Francisco, California. Schon has previously been married four times. His former wives are Amber Kozan, Dina Gioeli, Beth Buckley, and Tena Austin.