By Brian Warner on September 12, 2014 in Articles › Celebrity News

Keeping up with the rapidly-changing social media landscape is not easy. There's Facebook, Twitter, Vine, Instagram, Snapchat, YouTube channels, Pinterest, Tumblr, Google Plus, even LinkedIn. To make matters worse, each social network requires its own set unique set of skills and vocabulary. You've got to learn how to tweet, retweet, hashtag, check in, update your status, tag friends, upload photos… It can be overwhelming. Heck, I'm 31 years old and I'm already starting to feel like an out-of-touch geezer. So I can only imagine how intimidating social media must be for an actual out-of-touch geezer. Specifically adorable innocent grandmas.

Earlier today, my sister sent me a link to a Tumblr that is chronicling what might be the funniest social media accident ever. Here's what's happening:

You know how when you type text into a status update or comment section, periodically Facebook auto-suggests something or someone you might be meaning to tag? For example if I type in "Michael…" in a status update, Facebook might automatically think I'm trying to tag a friend named "Michael Smith". Simultaneously, Facebook also might think I'm trying to tag a public figure like "Michael Jordan". When you do end up tagging someone, Facebook auto-fills the name and sends that person a notification.

Well, apparently a bunch of Grandmas out there in Facebook-land don't quite understand this little technological "tagging" nuance. Adorably, when they go to sign their name as "Grandma" they are accidentally tagging hip-hop pioneer "Grandmaster Flash". The results are amazing. I'm gonna paste my favorite below, but if you want to see more, head on over to this Tumblr page. 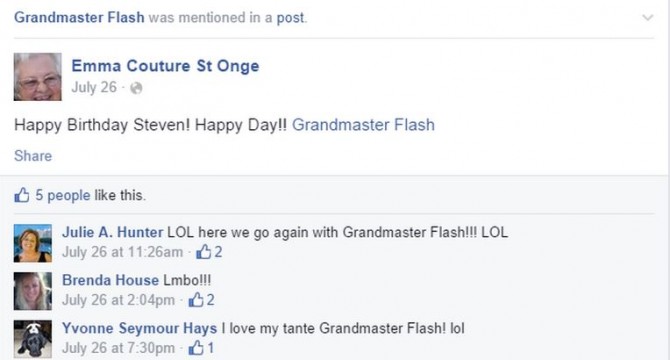 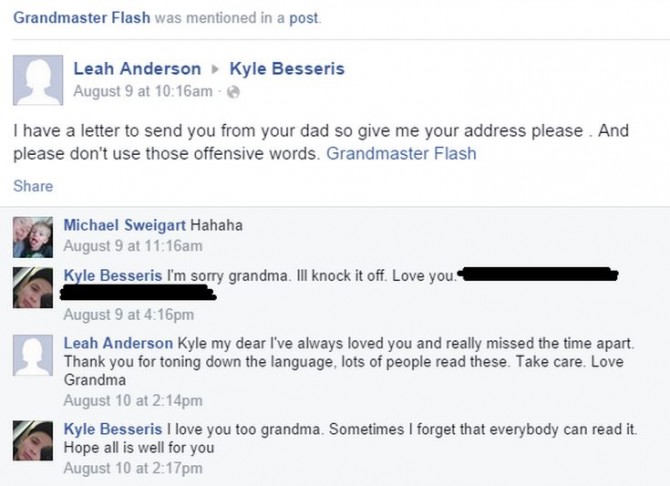 The best part about this phenomenon is that every time it happens, the real Grandmaster Flash gets a notification. Possibly even an email notification, depending on his settings. And I have a feeling that Grandmaster Flash is just the right mix of famous where he probably manages his own social media accounts. It's not like he's Justin Bieber who likely doesn't even know his own passwords. I'm absolutely cracking up at the image of Grandmaster Flash checking his facebook once a day and seeing 500 tag notifications.