What is Russell Wilson's net worth and salary?

Russell Wilson is an American professional football player who has a net worth of $165 million. Russell Wislon played for the Seattle Seahawks from 2012 to 2021. He moved to the Broncos ahead of the 2022 season. As of this writing, he has appeared in two Super Bowls, winning one.

He is one of the highest-paid athletes in the world. His base NFL salary of $35 million makes him the highest-paid quarterback in terms of per-season earnings. Between June 2018 and June 2019, Russell Wilson earned $90 million from his various endeavors.

Russell Wilson was born on November 29, 1988, in Cincinnati, Ohio, and grew up in Richmond, Virginia.  He began playing football with his father and brother before he started kindergarten. He went on to distinguish himself as a football player throughout high school, finishing his four years with multiple all-district, all-region, and all-state honors, as well as being named Conference Player of the Year. He was featured in "Sports Illustrated" his senior year. He was also a star player on his high school baseball and basketball teams.

Russell was drafted into Major League Baseball straight out of high school by the Baltimore Orioles. He was the fifth pick in the 41st round of the 2007 MLB draft. Technically he was the 1,222nd overall pick.

Technically, Wilson is also still available to play Minor League baseball and was recently acquired by the Texas Rangers.  He played minor league baseball for the Tri-City Dust Devils in 2010 and the Asheville Tourists in 2011 as a second baseman.

Wilson turned down the contract and opted to attend North Carolina State. Russell went on to play football, very successfully, for North Carolina State but was never invited to the NFL's Scouting Combine. He then surprised everyone by announcing his intention to play professional baseball. In 2011, Russell reported to spring training with the Colorado Rockies. Over the next two summers, Russell had moderate success playing minor league baseball. He also transferred to the University of Wisconsin-Madison, where he spent one more year. During the 2011 season, Wilson set the FBS record for passing efficiency (191.8) in a single season and led the team to a Big Ten title and the 2012 Rose Bowl against the Oregon Ducks. Wisconsin lost the bowl game.

In another move that shocked family and friends, in January 2012, Russell announced he was going to begin training for the upcoming NFL Scouting Combine. He entered the 2012 NFL draft as a projected middle-round pick. The Seattle Seahawks chose Russell Wilson in the third round as the 75th pick overall.

Russell went on to earn multiple honors while on the Seahawks, including being named Pepsi NFL Rookie of the Year, PFF Offensive Rookie of the Year, and ranked #51 on the NFL Top 100 of 2013. He was a 2012 Pro Bowl selection. At the XLIX Super Bowl, Wilson and the Seahawks almost repeated as champions but were defeated 28-24 by Tom Brady and the New England Patriots.

Wilson has been named to seven Pro Bowls and has started in two Super Bowls, winning Super Bowl XLVIII.  He holds the record for most wins by an NFL quarterback through seven seasons (75) and is one of two quarterbacks in NFL history with a career passer rating over 100.


On July 31st, 2015, the Seattle Seahawks signed Wilson to a four-year contract extension valued at $87.6 million. The contract came with a signing bonus of $31 million and $60 million of guaranteed money.

On April 16, 2019, Russell and the Seattle Seahawks signed a four-year $140 million contract extension. The contract, which came with a whopping $65 million signing bonus, was the richest deal in NFL history at the time. The deal came with a total of $107 million in guaranteed money.

In his last two seasons with the Seahawks Russell earned $35 million per year. 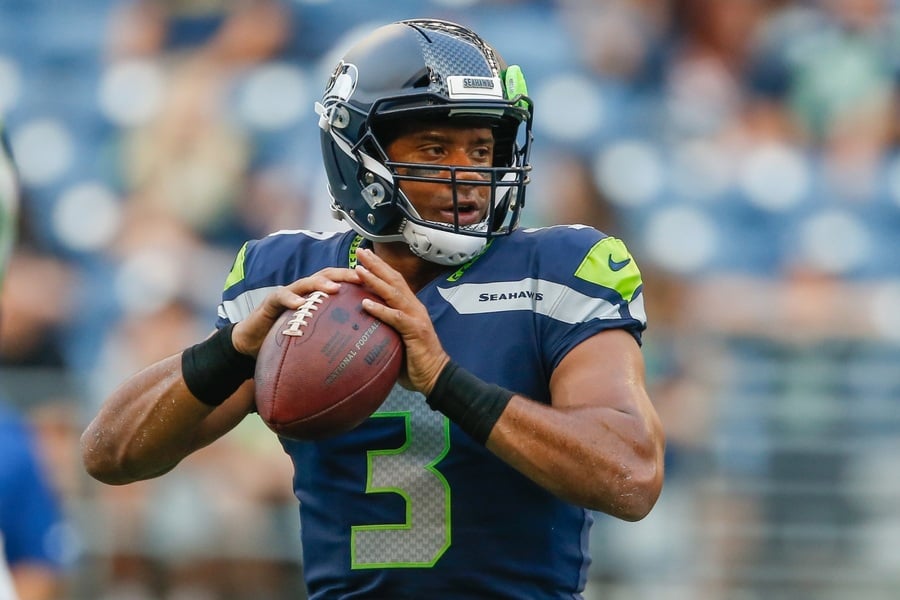 Wilson is a devout Christian. He frequently talks about his faith on his social media accounts.

Russell Wilson met Ashton Meem in high school in Richmond, Virginia. She was also a star athlete in high school and went to the University of Georgia when he enrolled at North Carolina State. When Wilson transferred to Wisconsin in 2010, she followed him there. The couple got married in January 2012 and divorced in April 2014. They have an amicable divorced relationship.

In early 2015, Wilson began dating singer Ciara. They made a pledge to be celibate until they got married. They announced their engagement in mid-March 2016. They got married at a castle in England on July 6, 2016. On April 28, 2017, their daughter was born. Ciara also has a son from a previous relationship. Wilson and Ciara announced in January 2020 that they were expecting their second child together.

Wilson is very active in the Seattle philanthropic community. He visits the Seattle Children's Hospital weekly on his days off during the NFL season. During the offseason, he puts on the Russell Wilson Passing Academy, a youth football camp. He's also visited with soldiers at a local military base.

Wilson is the National Ambassador of the Charles Ray III Diabetes Association. In 2012, the proceeds from his youth football camp were donated to this foundation.

He also co-hosts an annual charity golf tournament with NASCAR driver Kasey Kahne at the Suncadia Resort in Cle Elum, Washington, which is east of Seattle.

Wilson's Why Not You Foundation presented a check for a bit more than $1 million to the Seattle Children's Hosptial in 2016 for its Strong Against Cancer program.

During the Covid-19 pandemic, Wilson and his wife partnered with Food Lifeline to donate one million meals to those in need.

In 2015, Wilson paid $6.7 million for a waterfront mansion in Bellevue, Washington. The mansion sits on Lake Washington and had been on the market since 2010. It was built in 2008. The two-story, 10,700-square-foot home has seven bedrooms, 6.75 bathrooms, and sits on two-thirds of an acre of property with views of Lake Washington, downtown Seattle, and nearby mountain ranges. It comes with five fireplaces, a wine cellar, skylights, and a walk-in pantry. In April 2022 Russell listed this home for sale for $28 million.

Right around the same time as he listed the Bellevue mansion, Russell and Ciara paid $25 million for a mansion in the Denver area. The purchase set a record for most-expensive home sold in Denver. The 20,000 square-foot home has 4br, 12ba, an indoor pool, game room, home theater and basketball court. 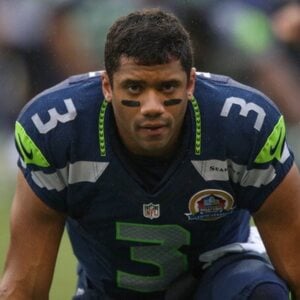