What is Kendrick Lamar's net worth?

Kendrick Lamar is an American rapper who has a net worth of $75 million dollars. He is one of the most popular and highest-paid rappers on the planet. To date he has earned more than $180 million in his career. In 2018 alone he earned $60 million, which made him one of the highest-paid entertainers for the year.

Born in Compton, California on June 17, 1987, Kendrick Lamar, also known as Kendrick Lamar Duckworth, began rapping while he was still in elementary school, inspired by his idols Tupac Shakur and Dr. Dre. Lamar's parents had moved from the south side of Chicago to Compton three years before he was born, as his father had been heavily involved in gang activity and his mother had issued an ultimatum for them to escape together. Kendrick was given his first name by his mother in honor of Eddie Kendricks of The Temptations. Despite his surroundings and the family's struggles to make ends meet, he's described good memories from childhood and was a straight-A student who churned out award-winning essays and impressive test scores at Centennial High School in Compton.

Lamar released his first mixtape (Youngest Head Nigga in Charge) at age 16 while still in high school, and immediately attracted the attention of local record labels. He signed with Top Dawg Entertainment in the early 2000s, and subsequently released another mixtape. 2008 and 2009 brought more recognition, including appearing in a music video for Jay Rock's "All My Life (in the Ghetto)", and co-signing with Lil Wayne. Once signed with Lil Wayne, he began calling himself Kendrick Lamar, rather than his stage name, K. Dot. He then released another mixtape, and re-released an earlier tape with his real name. In 2010 and 2011, he toured extensively, released a popular mixtape, and an independent album. His first major studio album, "good kid, m.A.A.d city" was released on October 22, 2012 under Interscope Records and Aftermath Entertainment. That album went on to sell over 1.1 million copies in the United States alone. Lamar performed the album's first singles "Swimming Pools (Drank)" and "Poetic Justice" on his debut appearance on Saturday Night Live. He also appeared alongside Adam Levine and The Lonely Island in a digital short that was the inspiration for the single "YOLO".

Outside of studio albums, Kendrick has appeared on dozens of singles featuring many popular artists like Big Sean, Robin Thicke, Drake, 2 Chainz, Birdman and J. Cole. Lamar's second studio album, Good Kid, m.A.A.d city, was released in 2012 and reached #1 on the US R&B/Hip-Hop chart as well as #2 on the Billboard 200 chart.

In September 2013, Kanye West announced that Kendrick Lamar would be supporting him on his first solo headlining tour in five years, in support of the album "Yeezus." The next month, Lamar was featured on Eminem's eighth studio album, "The Marshall Mathers LP 2". One month after that, in November, he was named Rapper of the Year by GQ magazine. Lamar was nominated for seven Grammys in 2014, including Best New Artist and Album of the year, but did not pick up any awards. Lamar featured on the remix of Taylor Swift's "Bad Blood" in May 2015, and the single reached No. 1 on the Billboard charts, and the music video scored them a Grammy for Best Music Video, as well as an MTV Video Music Award for Video of the Year.

His album "To Pimp a Butterfly" was released in 2015 and reached #1 on the Billboard 200 chart in the U.S. as well as in Australia, Canada, New Zealand, and the UK. The album was critically hailed and praised for its diverse sounds and creativity, and was described by many critics as "groundbreaking" for his ability to bend the "rules" of hip-hop.  Kendrick picked up five Grammys at the 58th ceremony for "To Pimp a Butterfly", including Best Rap Album. 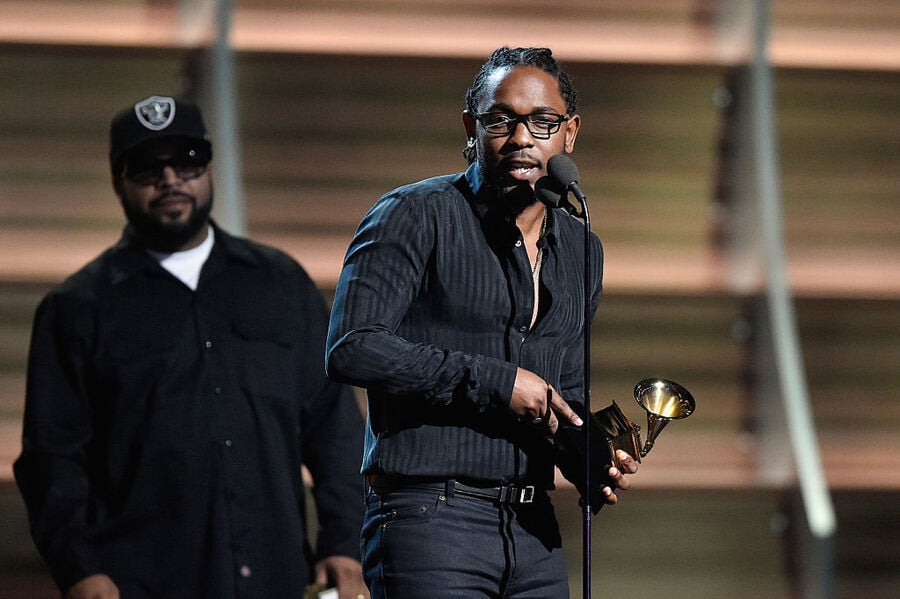 Lamar's next album, Damn, was released in 2017 and reached #1 on the Billboard 200 chart and in Canada. His most successful single "Humble" reached #1 on the Billboard Hot 100, US R&B/Hip-Hop, and US Rap charts. Lamar's other successful singles include the songs "Swimming Pools (Drank)", "DNA", and more. By May 2017, "Damn" was certified platinum. At the 60th annual Grammy Awards, he won Best Rap Album, Best Rap Performance, Best Rap Song, Best Music Video, and Best Rap/Sung Performance. Between June 2017 and June 2018, Kendrick Lamar earned nearly $60 million from his various endeavors.

Following the success of "Damn", Lamar produced and curated the soundtrack to Marvel's "Black Panther". The album was praised universally by critics and audiences. He earned an Academy Award nomination for Best Original Song for the song "All the Stars".

Lamar made his acting debut on the Starz drama series "Power" in July 2018. He played a Dominican drug addict named Laces. 50 Cent, a close friend and collaborator, serves as the executive producer for the series and requested the casting of Lamar. His work was critically acclaimed by reviewers and audiences. 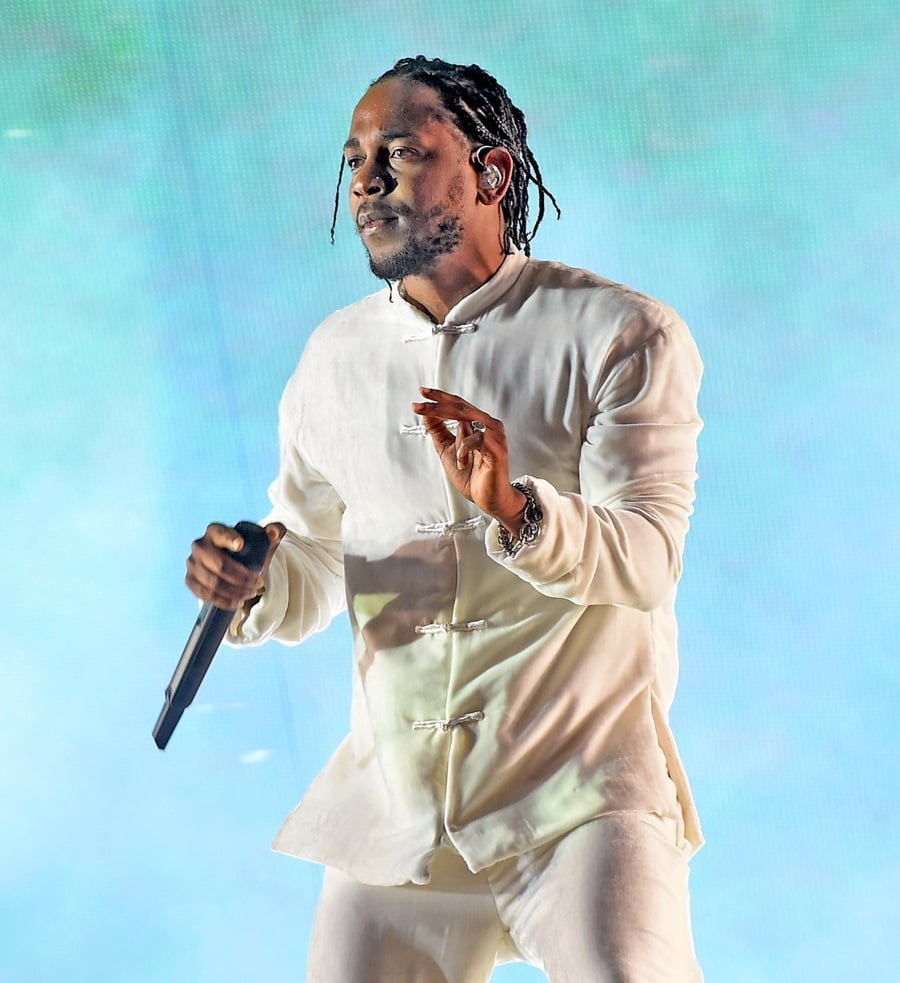 During his career, Kendrick has won thirteen Grammy Awards, has appeared on the Time 100 List of Most Influential People, and has received two civic honors. His album "Damn" won the 2018 Pulitzer Prize for Music, and he made history by being the first non-jazz or classical artist to ever win the award. Hailed worldwide for his thought-provoking lyrics and rhymes, Lamar has appeared on many publications' lists of best rappers of all time.

Lamar got engaged to Whitney Alford in 2015. They had their first child together in 2019.

Lemar is a former cannabis user, and is a converted, devout Christian. During the 2012 presidential election, Lamar stated that he did not plan to vote. However, in the days leading up to the election, he reversed this claim and said he was planning to vote for Barack Obama. 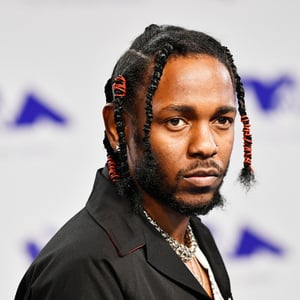