What is Caroline Wozniacki's Net Worth?

Caroline Wozniacki is a retired Danish professional tennis player who has a net worth of $50 million. Caroline Wozniacki was ranked world No. 1 in singles for a total of 71 weeks. Among her achievements, she won 30 WTA singles titles, three Premier Mandatory titles, three Premier 5 titles, and the 2018 Australian Open singles title. Following a loss in the 2020 Australian Open, Wozniacki officially retired.

Wozniacki made her tennis playing debut on the ITF Junior Circuit in 2003. She won her first singles event against her compatriot Hanne Skak Jensen, and went on to win four more singles events in 2004. Wozniacki subsequently made her Grade A debut at Wimbledon, where she lost in her first main draw match; however, she bounced back toward the end of the year to win the Osaka Mayor's Cup. Wozniacki won a number of junior tournaments in 2005, including the Orange Bowl Tennis Championship. She also made her WTA Tour debut at the Western & Southern Open, where she lost in the first round.

In 2006, Wozniacki won the Wimbledon girls' singles title, and made it to two WTA Tour quarterfinals. She had her final junior tournament in the Osaka Mayor's Cup, where she won both the girls' singles and doubles. Wozniacki continued her success in 2007, winning a singles title in Ortisei and a tournament in Las Vegas. She went on to make her first WTA Tour semifinal at the Japan Open, where she was defeated by Venus Williams.

Wozniacki won her first WTA Tour title in 2008 at the Nordic Light Open in Stockholm. Her next title came at the Pilot Pen Tennis in New Haven, Connecticut. Wozniacki went on to win her first WTA doubles title at the China Open, and took home further singles titles at the Japan Open and the Danish Open. The next season, Wozniacki won her first title of the year at the MPS Group Championships. Her second 2009 title came at Eastbourne, and her third at the Pilot Pen Tennis. Wozniacki had another major accomplishment when she reached the US Open final, becoming the first Danish woman ever to make it to a Grand Slam final. Ultimately, she was defeated by Kim Clijsters.

In 2010, Wozniacki scored major successes by winning the Danish Open, the Pan Pacific Open, and the China Open, among other tournaments. She had continued success the next year, winning in Dubai and taking home her first Premier Mandatory title in Indian Wells. Additionally, she won the Family Circle Cup, the Brussels Open, the e-Boks Open, and her fourth consecutive New Haven Open. Wozniacki finished 2011 as world No. 1 for the second consecutive year.

Wozniacki began to significantly struggle with her form in 2012. She continued to flounder in 2013, with injuries and many major defeats on the court; finishing the year, she was ranked world No. 10. Following a rocky start, Wozniacki bounced back in 2014, reaching the semifinals of the Eastbourne International and winning the Istanbul Cup. Further, she made it to the final of the US Open, her first Grand Slam final in five years. Among her successes in 2015, Wozniacki won the Malaysian Open, and made it to the final in Stuttgart; however, she ended the year at world No. 17, her worst year-end ranking in eight years.

In 2016, Wozniacki notched her 24th WTA title, and her first title in over a year, at the Pan Pacific Open. She won her second title of the season at the Hong Kong Open. The following year, Wozniacki defended her Pan Pacific Open title. More significantly, she defeated Venus Williams at the WTA Finals, giving her the biggest title of her professional career and boosting her to world No. 3. Wozniacki's streak continued in 2018 when she won the Australian Open, her first Grand Slam title. In the process, she regained her world No. 1 ranking. Later in the year, Wozniacki won at Eastbourne and at the China Open. Diagnosed with rheumatoid arthritis before the 2019 season, Wozniacki struggled with her form, and announced her retirement following the 2020 Australian Open.

Wozniacki had a major endorsement deal with Adidas beginning in 2007, with the brand sponsoring her clothing and footwear. Starting a couple years later, she wore tennis apparel designed by Stella McCartney for Adidas. Among her other endorsements, Wozniacki had deals with the sports equipment companies Babolat and Yonex. She also had brand partnerships with Turkish Airlines, Compeed BlisterPatch, Godiva Chocolatier, Lympo, Rolex, USANA, and more.

From 2011 to 2014, Wozniacki dated Northern Irish professional golfer Rory McIlroy. The pair got engaged in January of 2014, before McIlroy called it off in May. Later, in 2017, Wozniacki revealed via social media that she was dating former NBA player David Lee; the two got engaged later in the year, and married in 2019 in Tuscany, Italy. In 2021, the couple had a daughter named Olivia.

In 2017 David bought a condominium in West Hollywood, California for $13.5 million. He actually combined three units to create a 5,500 square foot single apartment that takes up roughly half of a floor. He sold the condo in May 2019 for $11 million, a $3 million loss. 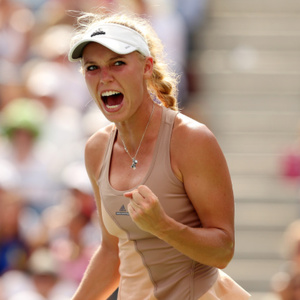