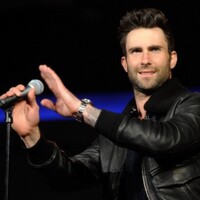 What is Adam Levine's net worth and salary?

Adam Levine is an American singer, songwriter and television host who has a net worth of $160 million. Adam Levine is most famous for being the lead singer of the band Maroon 5, but he is also one of the celebrity hosts of NBC's reality TV series The Voice. Adam earns $8 million per season for hosting The Voice alongside hosts who have included Blake Shelton, Usher, Shakira and Christina Aguilera.

Since the release of "Songs about Jane", singer-songwriter Adam Levine, the frontman for the popular band, Maroon 5, has been everywhere. In addition to his Grammy-winning albums with Maroon 5, he has also recorded successful tracks with a number of other artists, including Gym Class Heroes, Ying Yang Twins, Natasha Bedingfield, and Alicia Keys. He has also participated in a number of charity and health outreach campaigns, including shooting a rather eye-popping nude print campaign for testicular cancer awareness, making a video in support of the "It Gets Better" campaign, and launching his own Attention Deficit Disorder awareness program. In 2011, he became a mentor/judge on the American version of "The Voice", and his contestant, Javier Colon, went on to win the first season. He is known to be a savvy businessman and real estate investor as well as a talented musician and writer. He is a rock star through and through, complete with tattoos and a Victoria's Secret model wife. 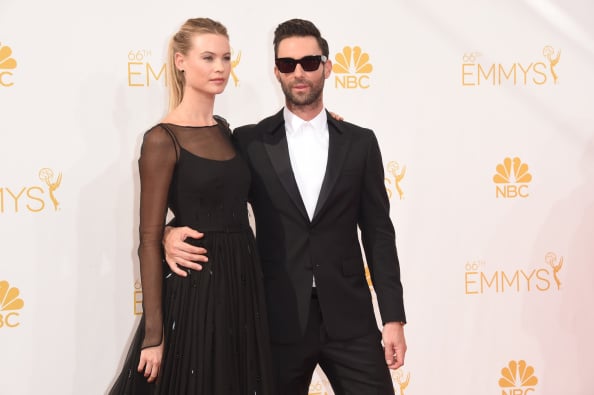 Adam Noah Levine was born in Los Angeles, California on March 18th 1979. His parents, Fredric and Patsy Levine, divorced when Adam was seven. He has described his family as very musical and attributed growing up listening to his mother's idols, Simon & Garfunkle, Fleetwood Mac, and the Beatles, to shaping his unique musical style. Levine went to Brentwood School where he met his future Maroon 5 band members, Jesse Carmichael and Mickey Madden.

Levine, Carmichael, Madden, and their friend Ryan Dusick formed a band called Kara's Flowers in February 1994. They played their first gig at Whisky a Go Go in West Hollywood in '95, with Levine on vocals and guitar. The band was discovered by producer Tommy Allen at a Malibu beach party where they were performing. Allen and his partner had Kara's Flowers record an 11-track album and they were subsequently signed to reprise records through producer Rob Cavallo. The band released their first album, The Fourth World, in August 1997. That same year, the band also made a guest appearance on Beverly Hills, 90210. After the guys graduated high school, they toured in support of their album, but to little success. After the album only sold about 5,000 copies, Reprise decided to drop the band and Kara's Flowers soon broke up.

After the band broke up, Levine and Carmichael moved to New York to study at Five Towns College. Eventually, Kara's Flowers decided to get back together with a makeover, adding a fifth member, swapping one out, and renaming themselves Maroon 5. Levine was a writer's assistant on the CBS television show Judging Amy before he hit it big in the music industry. During his time on Judging Amy, Adam wrote several poems and songs about an ex-girlfriend named Jane. These notes would eventually turn into Maroon 5's first smash hit album, 2002's "Songs About Jane" which was certified triple platinum after its release. The album was a sleeper hit, selling 10 million copies and becoming the tenth best-selling album of 2004–two years after its initial release. Maroon 5 won the Grammy for Best New Artist in 2005, and the next year they won the Grammy for Best Pop Performance by a Duo or Group for the album's second single, the insanely popular hit "This Love".

Since releasing their debut album, Maroon 5 has sold over 30 million albums worldwide, including 10 million in the United States alone. The group has also sold over 30 million digital singles. Maroon 5's albums It Won't Be Soon Before Long in 2007 and V in 2014 both reached #1 on the Billboard 200 chart. The band's popular singles include "Harder to Breathe", "This Love", "She Will Be Loved", "Sunday Morning", "Makes Me Wonder", "Moves Like Jagger" (featuring Christina Aguilera), "Payphone" (featuring Wiz Khalifa), "One More Night", "Maps", "Animals", "Sugar", "Don't Wanna Know" (featuring Kendrick Lamar), and more.

Maroon 5 continues to record and tour extensively. They have released six studio albums, three live albums, 30 singles, and 23 music videos. Levine has won multiple Grammy Awards, Billboard Music Awards, and American Music Awards. In addition to his work with Maroon 5, Adam Levine has appeared as a guest singer on dozens of singles alongside many popular artists. 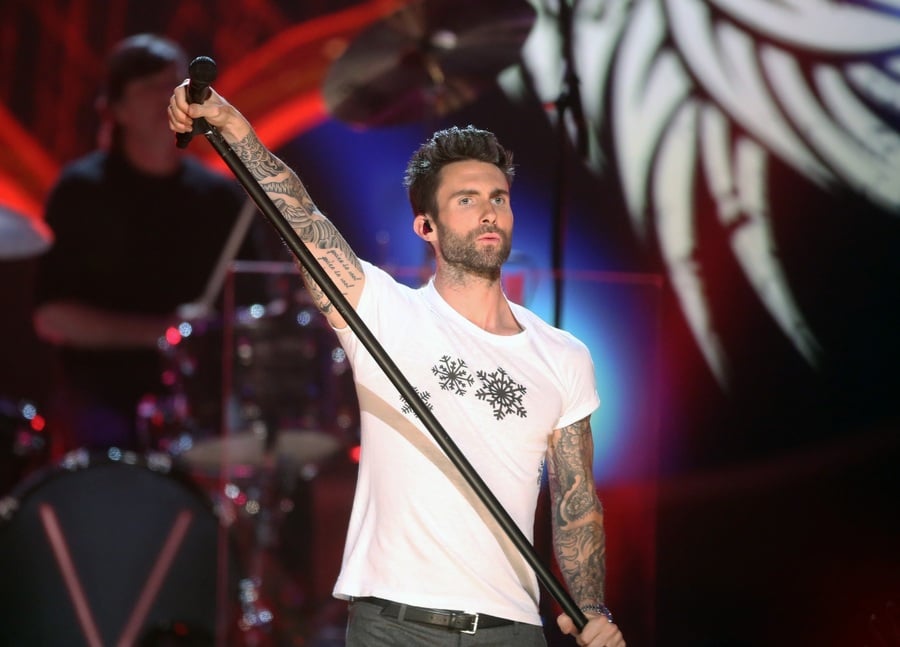 Adam has appeared on SNL several times. In 2012, Levine had a recurring role in American Horror Story: Asylum. He played Leo Morrison and the scenes were shot around his Maroon 5 touring schedule. That same year, he was cast in musical-romance drama film Begin Again, co-starring Keira Knightley and Mark Ruffalo.

Since 2011, Levine has served as a contestant judge and coach on the popular reality television talent show The Voice. Levine's popularity and reach has increased tremendously after joining the show. He has been described as the break out star of the series. In 2013, it was estimated by The Hollywood Reporter that Levine was being paid $12 million for each season of The Voice. Levine left The Voice in May 2019, after sixteen seasons and eight years. The film and his role received generally favorable reviews.

In 2018 Adam and a partner named Josh Gummersall launched a production company called 222 production. Their first project was Sugar, a YouTube web TV series inspired by the music video for the Maroon 5 song of the same title. 222 Productions also produced a reality competition series, Songland, for NBC in May 2019. Levine serves as the executive producer. Levine founded his own record label, 222 Records, in February 2012. Levine has also collaborated with various clothing companies to launch menswear lines. In January 2020, Levine became the Ambassador of the brand Shure and promotes their line of wireless earphones and headphones.

Adam Levine was known in the early 2010s for dating an array of famous supermodels. Adam married supermodel Behati Prinsloo in 2014, with Jonah Hill officiating their wedding. They have two children together, Dusty Rose and Gio Grace.

Levine has discussed using hallucinogenic drugs when he was a teenager. He has stated that he stopped using prescription drugs altogether after his first experience with Ambien which left him unconscious for an hour. 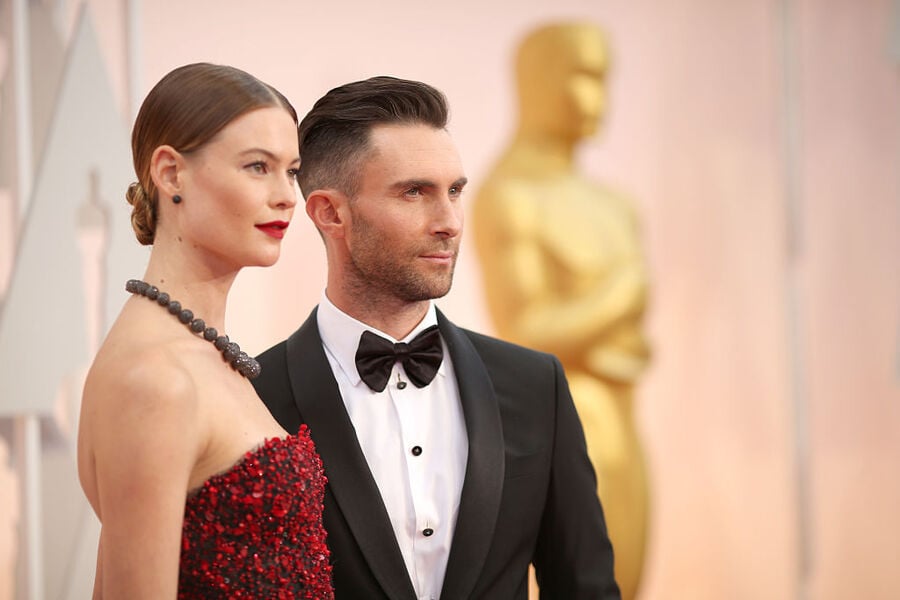 Salary from The Voice and Other Ventures

Adam and Behati are prolific real estate flippers. Below is a breakdown of some of their most notable real estate purchases and sales:

Beverly Hills: In March 2018, Adam paid $34 million for a 12,000 square foot house in Beverly Hills. They bought it from Will & Grace creator Max Mutchnick. Mutchnick bought it from Pete Sampras and his wife Bridgette Wilson in 2008 for $14.5 million. Adam and Behati spent $7 million remodeling the house over a year and then listed it for sale in April 2019 for $47.5 million. If they get their asking price, they'll make a $5 million profit in a year. Adam sold two other mansions in Beverly Hills in 2018, including one to John Mayer for $13.5 million. In 2017 he bought a house in Holmby Hills for $17 million, gutted it and prepared renovations. For some reason he lost interest and ended up selling it mid-construction for $18 million. He still owns another large property in Beverly Hills that he bought in 2012 for $5 million.

Montecito: In March 2021 Adam and Behati paid $22.7 million for a spectacular estate in Montecito, California set on five acres. Amazingly they sold the property just three months later for $28.5 million, a nearly $6 million gain for 90 days of ownership.

In March of 2022 Adam and Behati paid $52 million for a mansion in Montecito that was originally built by actor Rob Lowe. Known as "Oakview," the 3.5-acre property was purchased by Lowe in 2005. Lowe and his wife proceeded to build the current 10,000 square-foot mansion. Construction was complete in 2009. The Lowes listed the home for sale in June 2018 for $47 million. They ultimately sold it to a private equity tycoon for $45.5 million in October 2000. Adam and Behati purchased the home from the private equity tycoon.