Joel Embiid net worth: Joel Embiid is a Cameroonian professional basketball player who has a net worth of $35 million. Joel Embiid was born in Yaounde, Cameroon in March 1994. He is a 7'0″ center who played at The Rock School in Gainesville, Florida. Embiid played his college basketball at Kansas where he was named the Big 12 Defensive Player of the Year in 2014 and was also selected to the Big 12 All-Defensive Team and Big 12 All-Newcomer Team as well as being selected to the Second-team All-Big 12.

Joel Embiid was drafted #3 overall by the Philadelphia 76ers in the 2014 NBA Draft. In 2017 he was named to the NBA All-Rookie First team. Embiid was an NBA All-Star in 2018 and was selected to the All-NBA Second Team and the NBA All-Defensive Second Team. In 2017 he signed a five year deal with Philadelphia for $148 million with the ability to earn $30 million more for incentives. 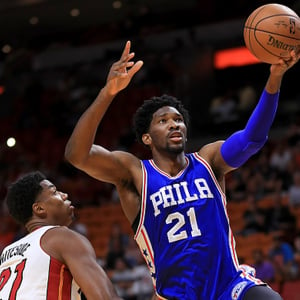