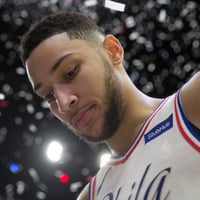 Ben Simmons net worth: Ben Simmons is an Australian professional basketball player who has a net worth of $6 million. Ben Simmons was born in Melbourne, Victoria, Australia in July 1996. He is a 6'10" point guard and forward who played at Montverde Academy in high school where he was named Mr. Basketball USA, the Gatorade Player of the Year, the Naismith Prep Player of the Year, a McDonald's All-American, and first-team Parade All-American in 2015. Simmons played his college basketball at LSU where he was named SEC Freshman of the Year, USBWA National Freshmen of the Year, and was first-team All-SEC and a consensus first-team All-American in 2016. He was drafted #1 overall by the Philadelphia 76ers in the 2016 NBA Draft. Simmons was the NBA Rookie of the Year and an NBA All-Rookie First Team selection in 2018 and was an NBA All-Star in 2019. He moved to the United States in 2013 while he was in high school.