What is Giannis Antetokounmpo's net worth?

Giannis Antetokounmpo is a Greek professional basketball player who has a net worth of $70 million. Affectionately referred to as "the Greek freak", Giannis is one of the highest-paid players in the NBA, with an annual salary that tops  and an annual salary of $45 million.

Among his achievements, he became the first NBA player ever to finish a regular season in the top 20 in all five statistical areas of points, rebounds, assists, blocks, and steals. Antetokounmpo also won back-to-back NBA MVP Awards in 2019 and 2020, and in 2021, led the Bucks to their first NBA championship title in 50 years.

Giannis Antetokounmpo was born as Giannis Adetokunbo on December 6, 1994 in Athens, Greece to Nigerian immigrants Charles and Veronica. He has two older brothers named Thanasis and Francis, and two younger brothers named Kostas and Alex. Because his parents could not easily find work, he and his brother Thanasis helped out financially by peddling handbags, watches, and sunglasses in the streets. In 2007, Antetokounmpo began playing basketball. Due to his lack of Greek citizenship, he was unable to travel outside the country for the first 18 years of his life, rendering him stateless. He eventually gained Greek citizenship in May of 2013, shortly before the NBA draft. Additionally, Antetokounmpo holds Nigerian citizenship.

Antetokounmpo began his playing career in 2011, playing with the senior men's team of the semi-pro Greek B Basket League's Filathlitikos. The next year, he signed a four-year deal with the Spanish club CAI Zaragoza.

Start with the Milwaukee Bucks

In the 2013 NBA draft, Antetokounmpo was selected 15th overall in the first round by the Milwaukee Bucks. He made his debut that October at the age of 18, making him one of the youngest NBA players in history. During his rookie season, Antetokounmpo averaged 6.8 points and 4.4 rebounds in 77 appearances. He was subsequently named to the 2013-14 NBA All-Rookie second team. Greater success came the following season, when Antetokounmpo recorded a career-high 27 points and 15 rebounds in a game against the Rockets. Later in the season, he improved his career high to 29 points in a game against the Pelicans.

Antetokounmpo continued to hone his skills in the 2015-16 season, increasing his scoring average to nearly 17 points per game. He recorded a new career high of 33 points in a game against the Cavaliers, and in December, notched a near triple-double with 11 points, 12 rebounds, and eight assists. In February of 2016, he recorded his first triple-double with 27 points, 12 rebounds, and 10 assists in a victory over the Lakers. 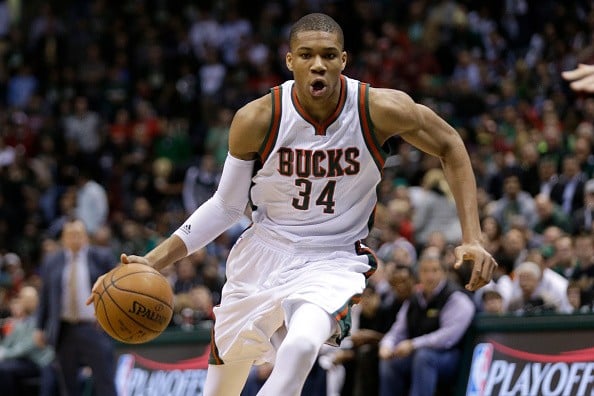 In September 2016, Giannis signed a four-year $100 million contract with the Bucks.

On December 15, 2020 Giannis signed a five-year $228 million contract extension with the Bucks. In terms of dollars per season, it was the largest contract in NBA history at the time of signing. The deal pays an average annual salary of $45 million. When you include the final year of his previous contract Giannis will earn $256 million over six seasons. His actual salary per season will break down as follows:

In September of 2016, Antetokounmpo agreed to a $100 million, four-year contract extension with the Bucks; he then went on to have his breakout season. In December, he recorded a career-high 39 points, and in January, made his first game-winning buzzer beater in a win over the Knicks. A little later, Antetokounmpo was named a starter on the Eastern Conference All-Star team, becoming the first-ever Greek NBA All-Star. He subsequently helped lead the Bucks to an Eastern Conference-best record of 14-4 in March, and also led the team in each of the five major statistical categories for the regular season. Further, Antetokounmpo became the first NBA player in history to finish in the top 20 in the league in points, rebounds, assists, blocks, and steals.

Antetokounmpo began the 2017-18 season with a bang, recording 175 points over the first five games of the season alone. He set a new career-high 44 points in a win over the Trail Blazers, and averaged nearly 27 points during the season. The Bucks went on to face the Celtics in the first-round playoff series, ultimately being eliminated in seven games.

Antetokounmpo continued his success in the 2018-19 season, helping the Bucks begin with seven consecutive victories. He earned multiple Eastern Conference Player of the Month honors, and in March, scored a new career-high 52 points. Antetokounmpo went on to lead the Bucks to a 60-22 season, the best record in the league. Subsequently, the team swept the Pistons in the second-round playoffs, and advanced to the Eastern Conference Finals; there, they fell to the Raptors. In recognition of his success, Antetokounmpo was named the 2019 NBA MVP. He repeated this honor the next year.

In December of 2020, Antetokounmpo re-signed with the Bucks on a $228 million, five-year contract extension. The team finished the season with a 46-26 record and a third seed in the Eastern Conference. In the first round of the playoffs, Antetokounmpo helped lead the Bucks to a four-game sweep of the Heat; he then helped lead them to a seven-game series win over the Nets in the Eastern Conference Semifinals. Subsequently, the Bucks advanced to the NBA Finals for the first time in 47 years. Although they lost the first two games, the team rallied back to take the next four. In the final contest, Antetokounmpo notched 50 points, 14 rebounds, and five blocks to bring the Bucks their first championship title since 1971. As a result, he was unanimously named NBA Finals MVP.

Beyond the NBA, Antetokounmpo has represented Greece on the world sports stage. In 2013, he played for the Greek Under-20 national team at the FIBA Europe Under-20 Championship. The next year, he played for the senior men's Greek national basketball team in the FIBA Basketball World Cup. He went on to play for the Greek national team in EuroBasket 2015, the Turin FIBA World Olympic Qualifying Tournament in 2016, and the FIBA Basketball World Cup in 2019.

With his girlfriend Mariah Riddlesprigger, Antetokounmpo has a son named Liam Charles. Antetokounmpo resides in Milwaukee, Wisconsin, where most of his family relocated to in early 2014. In 2020, he and his family donated 20,000 masks to people in Athens and Zografou, Greece to help combat the COVID-19 pandemic. 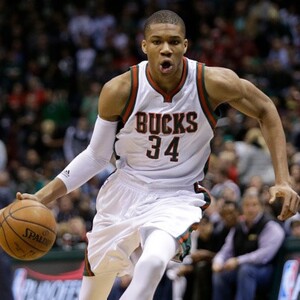