Jayson Tatum net worth and salary: Jayson Tatum is an American professional basketball player who has a net worth of $25 million. He is best known for being an NBA All-Star with the Boston Celtics.

Jayson Tatum was born in St. Louis, Missouri in March 1998. He is a 6'8″ small forward and power forward. Tatum played for Chaminade College Prep where he was named Gatorade National Player of the Year and Mr. Show-Me Basketball in 2016. The same year, he was named to the Jordan Brand Classic, Nike Hoop Summit, and was a McDonald's All-American. Tatum played his college basketball at Duke and was named to the ACC All-Freshman team and third-team All-ACC. He was drafted #3 overall by the Boston Celtics in the 2017 NBA Draft. Jayson Tatum was named to the NBA All-Rookie First Team in 2018 and was an NBA All-Star in 2020 when he also won the NBA Skills Challenge. He won gold medals representing the United States at the FIBA U17 and U19 World Championships.

Contracts: In November 2020, Jayson signed a five-year contract extension with the Celtics that could be worth up to $195.6 million. The total earnings will be dependent on Tatum earning various milestones such as winning the MVP and making the All-NBA team. If he does not hit the milestones, the minimum deal value is $163 million. His salary in year one will be $33 million. In year five his base salary will be $44.5 million. 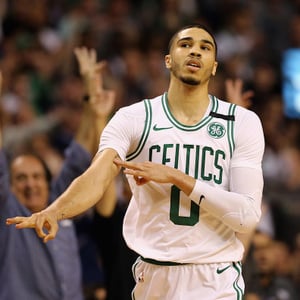