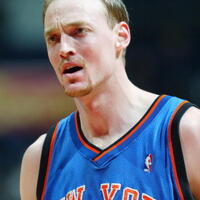 Keith Van Horn Net Worth: Keith Van Horn is a former American professional basketball player who has a net worth of $42 million. Born in 1975 in Fullerton, California, Keith Van Horn played college basketball at the University of Utah. Van Horn was a three-time Western Athletic Conference Player of the Year from 1995 through 1997. He earned first-team All-American honors in 1997 and had his number 44 jersey retired by the school. The Philadelphia 76ers chose Van Horn with the second overall pick during the 1997 NBA Draft. He was promptly traded to the New Jersey Nets the night he was drafted. Van Horn played with the Nets until 2002, earning a spot on the NBA All-Rookie first team. He then spent a season with the 76ers before playing for the New York Knicks from 2003 until 2004, the Milwaukee Bucks from 2004 until 2005, and the Dallas Mavericks from 2005 until 2006. He retired from the NBA in 2008, finishing his career with 9,205 points, 3,909 rebounds, and 900 assists. Van Horn appeared in 57 playoff games throughout his career, winning the 2002 Eastern Conference Championship with the Nets and the 2006 Western Conference Championship with the Mavericks. He finished fifth in scoring during the 1999 season.