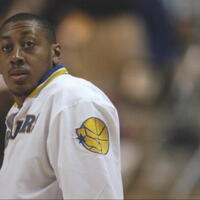 Donyell Marshall Net Worth: Donyell Marshall is a retired American professional basketball player who has a net worth of $28 million. Born in 1973 in Reading, Pennsylvania, Donyell Marshall played college basketball at the University of Connecticut from 1991 until 1994. The six-foot-nine, 245-pound forward earned 1994 Big East Conference Player of the Year and was a first-team All-American pick. The Minnesota Timberwolves chose Marshall with the fourth overall pick during the first round of the 1994 NBA Draft. Marshall played with the Timberwolves for 40 games before he was traded to the Golden State Warriors. Marshall played with the Warriors until 2000, then later the Utah Jazz from 2000 until 2002, the Chicago Bulls from 2002 until 2003, the Toronto Raptors from 2003 until 2005, the Cleveland Cavaliers from 2005 until 2008, the Seattle SuperSonics in 2008, and the Philadelphia 76ers from 2008 until 2009. Marshall earned All-Rookie second-team honors following the end of this first season with the Warriors. He finished his career with 10,716 points, 6,376 rebounds, and 1,305 assists. After his retirement, he worked as an analyst for Philadelphia and soon started working as an assistant coach at George Washington and with the Maine Red Claws and Rider University. Marshall had his number honored by the Huskies in 2007.