Shawn Bradley Net Worth: Shawn Bradley is a retired German-American professional basketball player who has a net worth of $27 million. Born in Landstuhl, West Germany, in 1972, Shawn Bradley played college basketball in the United States at Brigham Young University from 1990 until 1991 after being named a McDonald's All-American MVP in 1990 at his Utah high school.

The Philadelphia 76ers drafted him with the second overall pick of the first round during the 1993 NBA Draft. The seven-foot-six, 275-pound played with the 76ers until 1995. He then played with the New Jersey Nets until 1997 before joining the Dallas Mavericks from 1997 until 2005. He led the league in blocks in 1997 and earned second-team All-Rookie honors in 1994. He retired in 2005 with 6,752 career points, 5,268 rebounds, and 2,119 blocks. Bradley played for the German men's national team alongside fellow Mavs teammate Dirk Nowitzki. After his retirement, Bradley started coaching in Utah. He ran for the Utah House of Representatives as a Republican in 2010, but lost to incumbent Democrat Tim Cosgrove. Bradley has six children with his wife, Annette: four daughters named Cheyenne, Chelsea, Charity, and Ciera, and two sons named Chance and Chase. The family lives in Utah and all are practicing Mormons. Bradley starred in the hit movie "Space Jam" as an NBA player whose talent is stolen by the aliens. 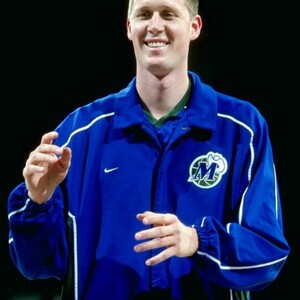