Tim Thomas Net Worth: Tim Thomas is a former American professional basketball player who has a net worth of $38 million. Born in 1977 in Paterson, New Jersey, Tim Thomas played college basketball at Villanova in Pennsylvania and was drafted into the NBA after his freshman season. The New Jersey Nets chose Thomas with the seventh overall pick during the 1997 draft, but quickly traded him to the Philadelphia 76ers before Thomas ever took the court in the Garden State.

Thomas was traded to the Milwaukee Bucks ahead of the 1999 season. He has since played for the New York Knicks, Chicago Bulls, Phoenix Suns, Los Angeles Clippers, and Dallas Mavericks. The six-foot-ten small forward was set to play for the Dallas Mavericks heading into the 2010 season but decided not to report so he could be with his wife, who was suffering from an unknown illness. Thomas earned second-team all-rookie honors during his first season in the NBA. He appeared in the playoffs seven times, with his best finishing coming in 2006 with the Phoenix Suns. Thomas finished his career averaging 11.5 points per game and appeared in 824 contests. He shot .437 percent from the floor and made nearly 37 percent of his career three-point attempts. 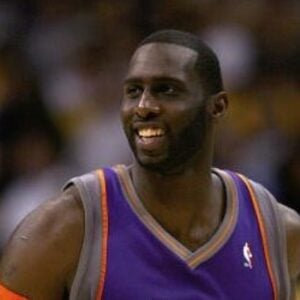