How much is DeSagana Diop Worth?

DeSagana Diop Net Worth: DeSagana Diop is a Senegalese professional basketball player who has a net worth of $18 million. During his career DeSagana earned a little under $50 million in NBA salary alone.

Born in Dakar, Senegal, in 1982, DeSagana Diop attended Oak Hill Academy in Virginia while in high school and was drafted into the NBA straight out of high school after being named the Virginia Player of the Year. The Cleveland Cavaliers chose Diop with the eighth overall pick during the first round of the 2001 NBA Draft. He played in Cleveland until 2005 when he joined the Dallas Mavericks until 2008. Diop also played with the New Jersey Nets in 2008 before rejoining the Mavs until the end of the 2008-2009 season. He then joined the Charlotte Bobcats until 2013. As of the fall of 2014, Diop is currently a free agent and has not officially retired from playing professional basketball. To date, Diop, a seven-foot tall, 280-pound center, has appeared in just over 600 career regular season games. In 14 averaged minutes per game, Diop was scoring two points per game to go along with close to four rebounds per contest. He made two postseason runs as a member of the Mavs in 2006 and again in 2007. Diop appeared in 28 playoff games with an average of just under three points per contest. 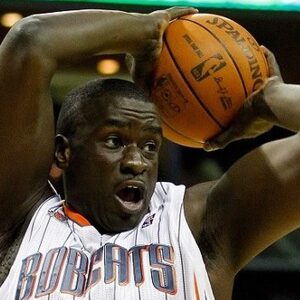