Devin Harris Net Worth: Devin Harris is an American professional basketball player who has a net worth of $20 million. Devin Harris was born in Milwaukee, Wisconsin, in 1983, and played college basketball less than two hours from his hometown in Madison for the University of Wisconsin Badgers from 2001 until 2004. Harris earned Wisconsin Mr. Basketball honors in 2001 as a senior and was named the 2004 Big Ten Player of the Year. He was a consensus second-team All-American during his final season with the Badgers before the Washington Wizards drafted him fifth overall during the first round of the 2004 NBA Draft. He was promptly moved to the Dallas Mavericks, where he played from 2004 until 2008. Harris later played with the New Jersey Nets from 2008 until 2011, the Utah Jazz from 2011 until 2012, the Atlanta Hawks from 2012 until 2013, and the Dallas Mavericks from 2013 until the present (currently fall of 2014). He earned NBA All-Star honors in 2009 while playing in New Jersey. Harris has appeared in the postseason six times, most recently in 2014 with the Mavericks. In 55 career playoff games, Harris is averaging just over nine points per game. The six-foot-three, 192-pound point guard/shooting guard is said to own more than 400 pairs of sneakers. He set the Guinness World Record for being the fastest man with the basketball after he covered the length of the court in a record-shattering 2.9 seconds. Harris has been recognized by the NBA for his work with charities. 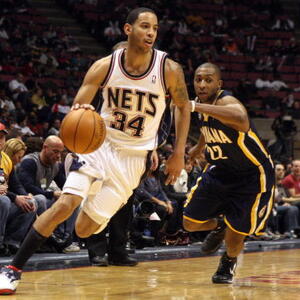