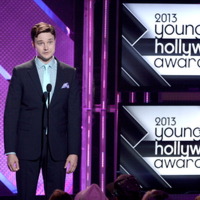 Michael McMillian Net Worth: Michael McMillian is an American actor and writer who has a net worth of $1.5 million. Michael McMillian was born in Colorado Springs, Colorado in October 1978. He studied at Interlochen Arts Academy and Carnegie Mellon University. Michael created and is the writer for the comic book Lucid. His debut acting credit came in the TV series Sliders in 1995. McMillian's debut film role came starring as Dorian Logatos in the 2004 movie Dorian Blues. From 2003 to 2005 he starred as Henry Gibson in the television series What I Like About You. In 2006 Michael starred as Harper Sims in the series Saved. He had a recurring role as Brett in the 2009 TV series Rockville CA. Since 2011 he has had a recurring role as Owen in the series Hot in Cleveland. One of McMillian's best known roles has come since 2008 starring as Steve Newlin on the TV series True Blood. He has also starred in the films The Hills Have Eyes II, Dimples, Imagine That, Half-Dragon Sanchez, and Banshee Chapter. He wrote and produced the 2009 short Glock. For his role in True Blood Michael won a Satellite Award in 2009 and was nominated for a Screen Actors Guild Award in 2010.