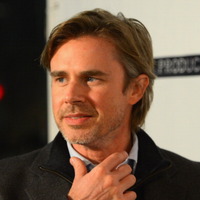 Sam Trammell Net Worth: Sam Trammell is an American actor who has a net worth of $4 million. Sam Trammell was born in New Orleans, Louisiana in January 1969. He is best known for his role as Sam Merlotte on the TV series True Blood. Trammell studied at Brown University and the University of Paris. He has acted on stage was nominated for a Tony for his performance in Ah, Wilderness!. His screen debuts came in 1996 in the TV movie Harvest of Fire and the film Childhood's End. In 1998 he had recurring roles in the TV series Maximum Bob and Trinity. From 2001 to 2002 Trammell starred as Kevin "Space" Lauglin in the TV series Going to California. His best known role has come starring as Sam Merlotte in the TV series True Blood since 2008. Trammell has also starred in the films Wrestling with Alligators, Beat, Fear of Fiction, Autumn in New York, Followers, Undermind, Aliens vs. Predator: Requiem, The Details, Guns, Girls and Gambling, Crazy Kind of Love, The Privileged, White Rabbit, Things People Do, The Fault in Our Stars, and Me. He won a Satellite Award in 2009 and was nominated for a Screen Actors Guild Award in 2010.