Chevron net worth: Chevron is an American oil company that has a market cap/net worth of $190 billion.  The history of the Chevron Corporation is made up of multiple company separations and mergers, and its willingness to look for oil overseas has made it one of the most successful companies in the world.  The Pacific Coast Oil Company was created in the late 1800s, after oil was discovered just north of Los Angeles.  Standard Oil subsequently bought up Pacific Oil.  After Standard Oil was split apart in the early 1900s, the section of Standard Oil that was made up of the former Pacific Coast Oil company, became known as Standard Oil Company of California, or SoCal, for short.  The Saudi Arabian government granted SoCal the right to seek oil in within the country's borders in the 1930s.  In 1938, SoCal found oil, and in 1948, they tapped the largest oil field on Earth in Ghawar, Saudi Arabia.  After their Saudi Arabian operations were formed into the company Saudi Aramco in 1980, SoCal and Gulf Oil merged and became known as the Chevron Corporation.  Since then, Chevron merged their natural gas division with NGC.  The new company became known as Dynegy.  They also merged with Texaco to become the second largest oil company in the world.  Since 2005, both Chevron and Texaco have been known as Chevron.  That same year, Chevron purchased Unocal Corporation, and became the largest producer of geothermal energy.  The Chevron Corporation currently employs 62,000 people worldwide and is headquartered in San Ramon, California. 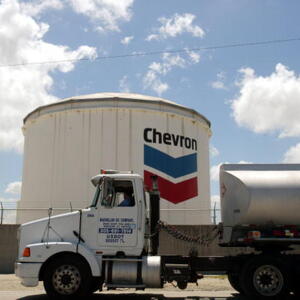