By Dina Zipin on August 12, 2019 in Articles › Entertainment

Jay-Z and Beyoncé fly around on private jets, Kanye and Kim throw a quaint little $2 million wedding, and Paris Hilton built a $350,000 house – for her dogs. If you think that's impressive, wait until you hear about Mansa Musa.

When it comes to the wealthiest people of all time, we're talking multi-billionaires, not millionaires. Bill Gates, Warren Buffet, and Spanx founder Sara Blakely are all doing just fine, but $1 million back in 1913 equals about $24,104,848.48 in today's dollars, so you can imagine what a fourteenth century millionaire's net worth would be today. Mind blowing – that's what it would be.

We did the research and found ten of the wealthiest people in history. They range from American business titans, to Biblical rulers, to ancient emperors. Some might surprise you, and some might inspire you. If this article sounds familiar, it's because we posted a similar one nearly four years ago here that eventually became one of the most popular CelebrityNetWorth stories of all time. That original article would go on to be copied by thousands of websites across the internet. It has been referenced on countless TV shows, magazines, radio programs and more.

One of the most controversial aspects of our original story was that we did not mention King Solomon. We literally get one email a week from someone complaining about that. So we figured now would be a good time to revisit this story, taking into account all the new information and research that has popped up in the last four years. Enjoy!

Ford is a legend in American business history, and his nearly $200 billion fortune proved it. He founded Ford Motor Company and made automobiles a worldwide phenomenon. He also instituted higher wages for his workers and created the concept of the assembly line, which allowed for goods to be manufactured inexpensively and therefore made affordable for the average person.

When he was overthrown and killed in 2011, Muammar Gaddafi, once the ruler of the northern African country of Libya, is said to have controlled a $200 billion fortune. His fortune was amassed during his four-decade rule over Libya, when he ruled Libya's oil fields. After his death, nearly $70 billion in cash was seized in foreign bank accounts and real estate.

William the Conqueror is best known for becoming the first Norman king of England, and reigning from 1066 until 1087. He was also one of the world's richest people. He lived from 1028-1087 and rose to fame after invading and seizing England. He also had the not-so-flattering nickname William the Bastard, and is thought to have been a descendant of Viking invaders. When he passed away, he left the equivalent of $229.5 billion to his sons. Yes, billion.

#6 Jakob Fugger of the Lily

His nickname was Jakob Fugger the Rich, and this German who lived from 1459 to 1525 made his billions mainly through textile trading in Italy. He also mined silver and gold in Bohemia and Hungary, and to top it all off he was a banker as well. So he was basically the Warren Buffet/Rockefeller/Bill Gates of sixteenth century Europe.

Mir Osman Ali Kan was also known as The Nizam of Hyderabad, which sounds like a fitting nickname for a multi-billionaire. He ruled Hyderabad until the country was invaded by neighbor India. He became Nizam of Hyderabad after his father died in 1911, and he ruled for 37 years, controlling the growth of education, electricity, and railroads in the area. He died in 1967, and he supposedly fathered 149 children. He also owned over $400 million worth of jewels, including the famous 184.5-carat Jacob Diamond, which is worth $95 million today. Khan reportedly used the diamond as a paperweight in his office. Rumor has it that he also owned more than 50 Rolls Royces.

Known as Tsar Nicholas II, Nikolai Alexandrovich Romanov earned $300 billion worth of wealth during his lifetime. According to the New York Times, "some estimates placed 70 percent of Russia's land under his control, meaning the Czar owned one-tenth of the earth's surface." He was the last emperor of Russia before the country fell during the Russian Revolution, and he and his family were executed in 1918. Later, Nicholas II became a saint recognized by the Russian Orthodox Church – known as the wealthiest saint in human history.

In the mid-1800s, Andrew Carnegie rose to prominence due to his success in the steel industry. He grew up poor and moved from Scotland to the U.S. with his family in the late 1840s. He eventually founded the U.S. Steel Corp., and he sold his Carnegie Steel Company to JP Morgan for $480 million in 1901. He took home $230 million worth of gold bonds and received a five percent annual coupon to top it off. Carnegie was also known for giving away almost all of his fortune, and his final $30 million was donated after his death, making him not just one of history's wealthiest people, but one of the most generous.

The Rockefeller name is about as American as apple pie. The fortune amassed by John D. Rockefeller gave us Rockefeller Center and, by extension, the great Tina Fey comedy 30 Rock.

Rockefeller's $340 billion fortune is still one of the largest in history. He was born in New York 1839, and he co-founded Standard Oil, which cemented his wealth and his place in history. He was a revolutionary in the early days of the energy and petroleum industries, he founded two colleges during his lifetime, the University of Chicago and Rockefeller University.

After he founded Standard Oil in 1870, when he was just 31, he bought up most of the oil refineries in the U.S.A., going on to control about 90 percent of the American oil business. His business was eventually broken up by The U.S. Government for being a monopoly. Standard Oil was broken into smaller companies that might sound familiar today: Amoco, Chevron Conoco, and ExxonMobil. He was the first American to ever have a net worth over $1 billion. 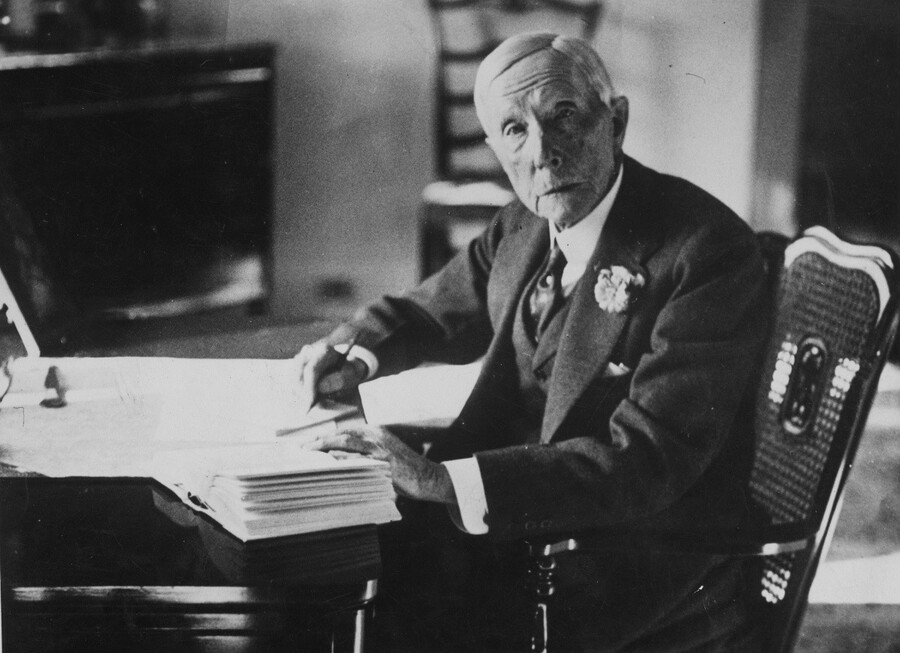 Mansa Musa, or Musa I of Mali, has long been considered the richest person in history. As the emperor of the Mali empire, he commanded a fortune worth about $400 billion. Bill Gates' net worth is approximately $73 billion, to give you an idea of Musa's fortune. He was born in 1280 and lived until 1337, and during that time he built educational centers and mosques across Africa, in places like Timbuktu. He made a pilgrimage to the Muslim holy site Mecca in 1332 and his procession supposedly included 60,000 men, including 12,000 slaves who each carried four pounds of gold bars. Sounds like a blast.

According to the bible, King Solomon reigned circa 970 to 931 BC and was the wealthiest person who ever lived. Solomon reportedly received 25 tons of gold for every year for 40 years during his reign. He also had 700 wives and 300 concubines, plus a house made of pure gold and silver.

The problem with including him on the list of the richest human beings of all time is that Solomon's existence and fortune can't exactly be proven to a scientific certainty. This is not meant to be an anti-religious statement, it's just not 100% factual that there was ever an actual King Solomon or that he had any wealth at all. If he did exist, there's definitely not any solid evidence that his fortune was actually large enough to make him the wealthiest human being of all time.

British Bible scholar Kenneth Kitchen believes that Solomon did exist and did receive large quantities of gold as tribute. Thanks to these gold tributes, Mr. Kitchen calculates that Solomon might have accumulated an inflation-adjusted fortune of $20 billion. A very impressive fortune no doubt, but clearly not enough to make him the richest human being of all time. What do you think? Do you believe that Solomon was the richest human being of all time? Or does that crown still belong to Mansa Musa?