Condoleezza Rice net worth and salary: Condoleezza Rice is an American politician, civil servant, professor, and diplomat who has a net worth of $12 million. Condoleezza served as the United States National Security Advisor from 2001 to 2005, and as the Secretary of State from 2005 to 2009 under President George W. Bush. Among her distinctions, she is the first female African-American to serve in both positions. Following her tenure, Rice returned to her professorship at Stanford University, and later became the director of that school's Hoover Institution.

Salary: Condoleeza earns salaries from several sources in a typical year. Her Stanford University salary is $305,000. She also earns salaries for serving on various company boards. For example, in 2019 she earned $405,000 for serving on the board of Dropbox. Of that income, $105,000 was base salary and $300,000 was equity. According to the latest regulator filings, she owns at least $4 million worth of Dropbox stock and has sold roughly $1 million worth since being elected to the board.

Early Life and Career Beginnings: Condoleezza Rice was born in 1954 in Birmingham, Alabama as the only child of John, a minister and dean of students, and Angelena, a high school teacher. Rice was raised in Birmingham's Titusville neighborhood, and then on the campus of Tuscaloosa's Stillman College, where her father worked. In 1967, after the family moved to Denver, Colorado, Rice enrolled at St. Mary's Academy, an all-girls Catholic school. Following her graduation at the age of 16, she attended the University of Denver, from which she graduated at the age of 19 with a BA in political science. In 1975, she earned her MA in the same field from the University of Notre Dame.

During the Carter administration in 1977, Rice started to work in the State Department as an intern. In 1979, she studied Russian at Moscow State University, and interned with the RAND Corporation in California. Later, in 1981, she obtained her Ph.D. in political science from the University of Denver. At that time, she was also a fellow at Stanford University's Arms Control and Disarmament Program, beginning her career-long affiliation with Stanford.

Academic Career and Start in the White House: From 1981 to 1987, Rice was an assistant professor of political science at Stanford, and from 1987 to 1993, she was an associate professor, giving lectures on the Soviet Union. Her work attracted the attention of Brent Scowcroft, a former National Security Advisor in the Gerald Ford administration. When Scowcroft returned to the White House to serve under the newly elected George H.W. Bush, he enlisted Rice to join the National Security Council as his Soviet expert. From 1989 to 1991, she served as director of Soviet and East European Affairs, helping to develop policies promoting German reunification.

In 1993, Rice was appointed as the Provost of Stanford University, making her the first woman and the first African-American to assume that position in the school's history.

National Security Advisor: After the presidential election in 2000, Rice was named the National Security Advisor under George W. Bush, becoming the first woman to hold the position. She was heavily involved in discussions on terrorism prior to 9/11, even scheduling to talk about a new national security policy on the day of the attacks. Following 9/11, Rice met with CIA director George Tenet to confirm the administration's approval of torture in interrogating alleged Al Qaeda members. Later, in 2003, she became a major proponent of the invasion of Iraq.

Secretary of State: Upon his reelection in 2004, Bush nominated Rice to be his next Secretary of State, following Colin Powell. In this position, Rice advocated for the expansion of democratic governments in the Middle East, working to restructure US diplomacy through her "Transformational Diplomacy" agenda. Rice also played a pivotal role in attempting to quell nuclear threats from Iran and North Korea. She traveled heavily during this time, earning the record for the most miles logged as Secretary of State. 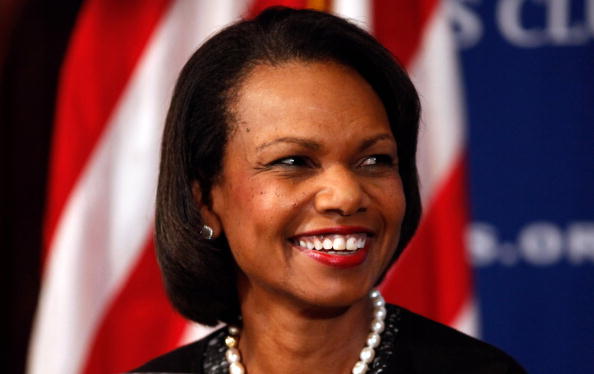 Political Views: Until 1982, Rice was a Democrat; she switched her affiliation to Republican in part due to her disagreement over Carter's foreign policy. Under Bush, she had somewhat liberal views on abortion, but held conservative positions in regard to LGBTQ rights, gun control, and environmentalism. She is against same-sex marriage.

Private Sector: On top of her public service, Rice has sat on the board of directors of numerous companies, including the Carnegie Corporation, the Chevron Corporation, Hewlett Packard, the Transamerica Corporation, and Dropbox. In 1992, she founded the Center for New Generation, an after-school program designed to increase high school graduation rates in East Palo Alto and Menlo Park, California.

Post-Bush Career: Following her political tenure under Bush, Rice came back to the academic world and joined the Council of Foreign Relations. She returned to Stanford as a political science professor, became a faculty member of the Graduate School of Business, and was named director of the institution's Global Center for Business and the Economy. In 2012, Rice was admitted to the Augusta National Golf Club as one of the first two women to join, the other being financier Darla Moore. The next year, she was chosen as one of the inaugural members of the College Football Playoff selection committee. In 2020, Rice succeeded Thomas W. Gilligan as director of Stanford's Hoover Institution.

Music: Since the age of three, Rice has played the piano. At 15, she performed Mozart with the Denver Symphony, and played on a regular basis with a chamber music group while serving as Secretary of State. Her performances have occurred at various embassies, diplomatic events, and benefit concerts. In 2002, at the National Medal of Arts Awards, Rice accompanied renowned cellist Yo-Yo Ma to perform Brahms.

Personal Life: Rice has never been married, and does not have any kids. She dated and was briefly engaged to NFL player Rick Upchurch in the 70s, but left him when she thought the relationship wouldn't pan out. 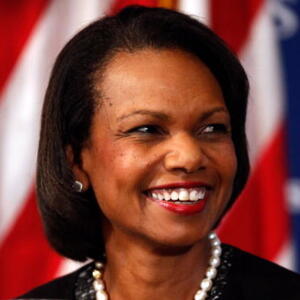