By Amy Lamare on February 3, 2020 in Articles › Entertainment

Remember John Stumpf? He was the CEO of Wells Fargo during the bank's fake accounts scandal. Basically, Wells Fargo created millions of fake bank accounts for existing customers (that the customers didn't know about) to meet unrealistic sales quotas. Stumpf's reputation took a beating in the wake of this scandal. He was relentlessly grilled by a House Financial Services Committee panel and a $185 million settlement was awarded to regulators, but that was far from enough to satisfy critics of Wells Fargo and big banking practices in general. Now Stumpf is personally feeling the heat for what transpired.

U.S. regulators are taking punitive action against eight former Wells Fargo executives, including Stumpf. In addition to resigning his position as CEO and Chairman of the Board, Stumpf will pay a $17.5 million fine and will be banned from the banking industry for life. The fines levied on all eight executives total $59 million. Stumpf's fine isn't even the largest handed out. Carrie Tolstedt headed up Wells Fargo's community bank for a decade. She's already been fined $25 million, but regulators were quick to point out that her fine could get larger. Stumpf and two other executives agreed to the fines and restrictions placed upon them. Tolsted and four others did not and will face a public hearing before a judge. 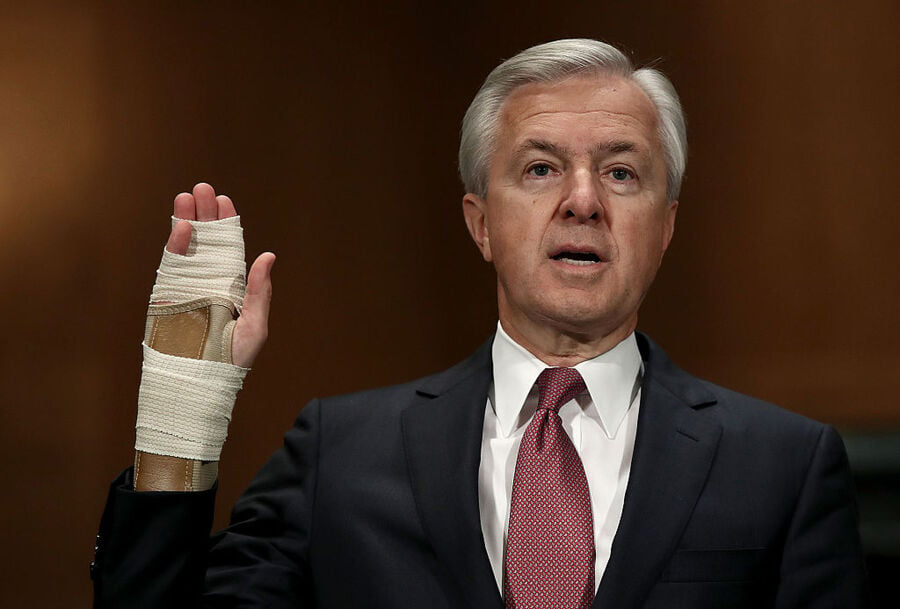 Wells Fargo is the fourth-largest bank in the U.S. It has been restructuring and complying with regulatory reforms since the fake accounts scandal in 2016. The bank has paid billions in fines to a number of government agencies. It has also faced lawsuits and settlements relating to the fake accounts currently totaling almost $1.4 billion. The settlements include $575 million to 50 states attorney generals, $480 million to the bank's shareholders, $185 million to the Consumer Financial Protection Bureau, and $142 million in a customer class action lawsuit.

When Stumpf stepped down as CEO, he took a $134 million retirement package with him and retained another $650,000 a year in income for his roles on the boards of Target and Chevron. He has a net worth of $50 million.