Idriss Deby Net Worth: Idriss Deby was a Chadian politician who had a net worth of $50 million at the time of his death. Idriss served as President of Chad from 1990 until his death on April 20, 2021. He was also the head of the Patriotic Salvation Movement. He was part of the Bidyat clan of the Zaghawa ethnic group.

General Idriss Deby Itno was born in Fada, French Equatorial Africa in 1952. Deby gained power after a rebellion against President Hissene Habre in 1990 and he has survived rebellion attempts himself. He received a professional pilot certificate after attending the Officers' School in N'Djamena. He became commander-in-chief of the army under Habre in 1983. He later became chief military advisor to the Presidency.

In 1989 a rift took place between Deby and Habre and Habre accused Idriss of planning a coup d'état. The Patriotic Salvation Movement started as an insurgent group and was supported by Sudan and Libya. Deby won elections in 1996 and 2001. Term limits were eliminated and he won again in 2006 and 2011.

He made international headlines in 2006 saying that Chevron and Petronas were not paying taxes totaling nearly $500 million. That same year, Chad was named the world's most corrupt nation by Forbes magazine.

Idriss was married several times. He has had at least a dozen children. His son Brahim was found dead in 2007 from being asphyxiated by white powder from a fire extinguisher. 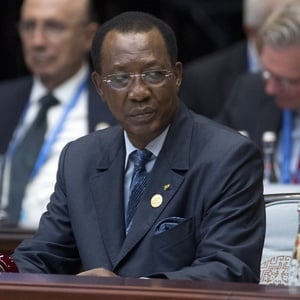