What was John D. Rockefeller's Net Worth?

John D. Rockefeller was an American business magnate and philanthropist. An accounting clerk by trade, Rockefeller turned a $4,000 investment in a Cleveland oil refinery into the largest fortune in modern human history. At the time of his death in 1937, John D. Rockefeller's net worth was equal to $340 billion after adjusting for inflation and taking into account relative GDP at the time. For about 80 years, that inflation-adjusted net worth made Rockefeller by far the richest American of all time and the richest human in modern history. He was overtaken by Elon Musk on November 4, 2021.

What Happened To The Rockefeller Fortune?

The short answer is that he gave around half of his fortune to charity (through his foundation), and the other half was set aside in trusts to benefit family members over generations.

At the time of his death, John controlled an estimated $1.4 billion in actual dollars and other liquid assets.

Today the Rockefeller family employs hundreds of financial managers who operate "the family office" out of the 56th floor of 30 Rockefeller Center in New York City. These managers oversee both the $4 billion Rockefeller Foundation and an estimated $20 billion in personal wealth that belongs to approximately 250 heirs. As an example of the family's modern wealth, John Sr.'s great-grandson Jay Rockefeller served as a Senator from West Virginia from 1985 to 2015. According to his last congressional financial disclosure, Jay – who was born one month before his great-grandfather died – was worth $160 million in 2013. David Rockefeller, one of John Jr.'s children, was worth $3.3 billion when he died in 2017. His art collection alone was worth around $1 billion. 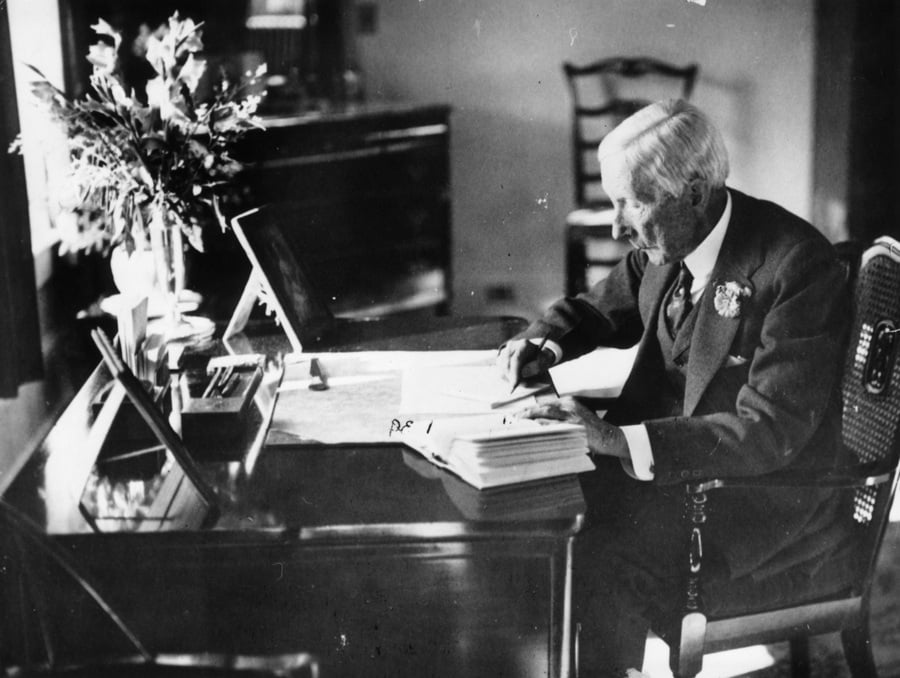 John Davison Rockefeller Sr. was born in Richford, New York. He had five siblings. His father William Avery wasn't around very much, so his mother Eliza was basically a broke single mom. Rockefeller worked to earn extra money and helped around the house whenever he could. Eventually, his family moved to Moravia, New York, then to Owego, New York, where he attended school at Owego Academy. The family later moved to Strongsville, Ohio, where Rockefeller attended Central High School in Cleveland. He also completed a 10-week business course at Folsom's Commercial College to learn bookkeeping.

At the age of 16, after completing school, he got a job as an assistant bookkeeper for Hewitt & Tuttle, a small produce commission firm in Cleveland. He was only making 50 cents a day but still donated 6% of that to charity. This was an important opportunity for Rockefeller because it was here than he began learning about shipping negotiations and calculating transportation costs. Eventually, he went into partnership with Maurice B. Clark and they opened their own small produce commission business, raising $4,000 ($113,822 in 2019 dollars) in capital.

Not long after that, Rockefeller and Clark built an oil refinery in Cleveland, Ohio, which they owned with Samuel Andrews and Clark's two brothers. At the time, the federal government was subsidizing oil prices, and there was a large market for refined oil in the form of kerosene. Two years later, Rockefeller bought out the Clark Brothers and the business was renamed Rockefeller & Andrews. Rockefeller would soon prove himself to be one of the best entrepreneurs in human history, one that could turn money into more money, and at the same time never let greed stop him from sharing his wealth.

Rockefeller's brother William Jr. built another refinery in Cleveland in 1866, and soon brought him into the business. They recruited Henry Morrison Flagler in 1867, and all of their combined assets merged into the firm Rockefeller, Andrews & Flagler. By 1868, the company was the largest oil refinery in the world, with its two refineries in Cleveland and a marketing subsidiary in New York. Thus, the foundations were laid for the later establishment of the Standard Oil Company. However, by 1869 the capacity of the market to refine kerosene far outpaced the supply-demand.

In January 1870, Rockefeller dissolved the Rockefeller, Andrews & Flagler partnership. In its place, he established the company Standard Oil of Ohio. Rockefeller proceeded with his business formula; his strategy was to buy the least efficient competing refineries, go in and improve their efficiency, negotiating discounts on oil shipments, undercutting any competition, raising investment capital, and then buying his rivals out, even making secret deals at times when deemed necessary. In 1874 his former biggest competition, the major New York refiner Charles Pratt and Company, made a deal to be acquired by Rockefeller, and their leaders Charles Pratt and Henry H. Rogers became Rockefeller's partners. Standard Oil continued to grow, and by the end of the 1870s they were refining over 90% of the oil in the US. At the same time, Rockefeller had become a millionaire (which would be $26 million after adjusting for inflation in 2019 dollars).

Back then, it was very difficult to operate a company in multiple states. As a result, Standard Oil was actually made up of dozens of separate corporations, where each one operated in a specific state. This made the management of the entire enterprise inefficient and difficult, so in response, Rockefeller's legal team helped craft a solution: create a corporation of corporations, or a "trust." The resulting Standard Oil Trust had 41 companies, run by nine trustees, including Rockefeller.

As the antitrust movement in the US grew, the Sherman Antitrust Act was passed in 1890. In 1911, the US Supreme Court ruled that the Standard Oil Company of New Jersey was in violation of the act, and it was ordered to be split into 34 new companies. Some of the companies that came to be as a result include Conoco, Chevron, Esso (later Exxon, now part of ExxonMobil). Rockefeller, who held over 25% of Standard Oil's stock at the time of the split, received proportionate shares in each of the 34 companies. Although Rockefeller's control over the oil industry was reduced overall, the split was very profitable for him, because the combined net worth of the companies rose fivefold, and his personal wealth rose to $900 million.

Rockefeller was a devout Christian who always gave 10% of his income in tithes to his church. He also left the majority of his wealth to charity upon his death, in the form of foundations that are still controlled by his family to this day.

Rockefeller gave generously to education, founding the University of Chicago and the Rockefeller University. He founded many organizations to benefit medical research, education and science, and his founding for research helped eliminate the illnesses of yellow fever and hookworms. The more money he made, the more generous he became. Some of his contributions went to Spelman College in Atlanta, for African American women. He also gave support to universities such as Yale, Harvard, Vassar, Columbia, and other educational institutions. Rockefeller was the founder of the Rockefeller Institute for Medical Research, the Rockefeller Sanitary Commission, and his General Education Board in 1903, which was founded in the hopes of giving everyone the equal opportunity to learn.

Rockefeller married Laura Celestia "Cettie" Spelman in 1864. Together, they had four daughters and one son. Rockefeller passed away of arteriosclerosis in May 1937, two months shy of his 98th birthday. 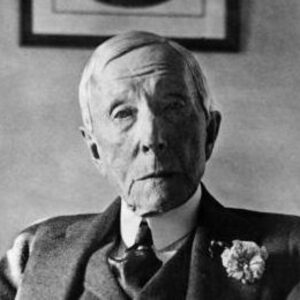