By Brian Warner on November 4, 2021 in Articles › Billionaire News

For the last 80+ years, John D. Rockefeller has been the undisputed richest person in history. That streak ended today.

Until today, no other single person has controlled more private wealth. For most of Rockefeller's 80-year streak, the only human who came close to was Andrew Carnegie. But even Carnegie, with an inflation-adjusted fortune of $310 billion, was a fairly distant second.

As I type this article, Elon Musk's net worth is $340 billion. That's the exact same number most historians compute when calculating the modern equivalent of Rockefeller's fortune. Elon and John are exactly tied. So in theory, if someone gives Elon a dollar today, he would technically be the richest person in history 🙂 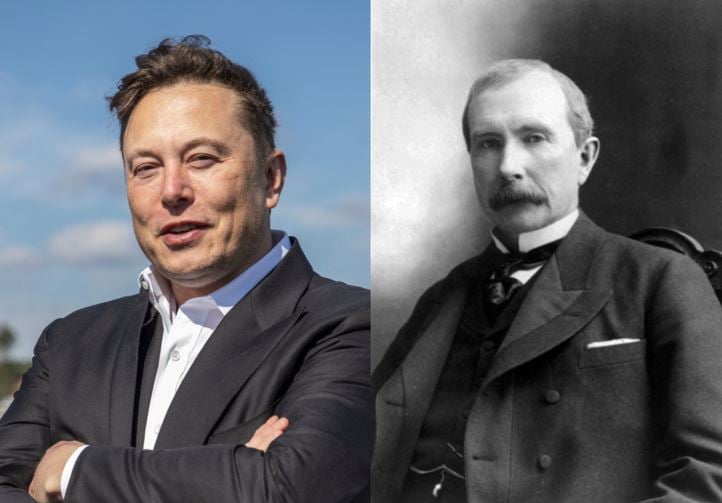 John D. Rockefeller lived from 1839 to 1937. After starting out with a few thousand dollars and some oil refineries in Cleveland, Rockefeller went on to turn Standard Oil into a world-dominating petroleum monopoly.

Thanks to Standard Oil, Rockefeller became the world's first non-inflation-adjusted billionaire. In other words, he was the first person to control a billion dollars in real-time assets/wealth.

Fun fact: In 1906 Standard Oil was sued by the United States government under the Sherman Antitrust Act. The government's lawsuit was successful and the Standard monopoly was broken up in 1911. You might assume that breaking up his empire caused Rockefeller's fortune to diminish. NOPE. A decade before the break up, a Standard Oil audit calculated Rockefeller's net worth at $200 million. Just two years after the empire was divided… with Rockefeller owning pieces of each new company… a Standard Oil audit estimated his net worth at $900 million. To put that into perspective, today Mark Zuckerberg is worth $118 billion. Imagine if Facebook was forced to break up and spinoff assets like Instagram and Whatsapp into new competing companies. And then imagine if two years later Mark was worth a little under $500 billion. That's what happened to Rockefeller. But I digress…

Starting in 1917 (and continuing throughout the final 20 years of his life) Rockefeller began transferring massive chunks of his wealth to his children and a charitable foundation (today's Rockefeller Foundation). If you count all the money that was transferred to dozens of trusts, John D. Rockefeller's peak net worth was very close to $2 billion.

If you use an internet calculator to adjust $2 billion to today's inflation-equivalent dollars, you'll land on a number in the $25-30 billion range. But that doesn't give you the full picture. In order to correctly grasp the modern-equivalent of Rockefeller's fortune, one needs to take into consideration several factors, notably his net worth as a percentage of American GDP.

For example, the Gross Domestic Product of the United States in 1935 was $74 billion. At that point Rockefeller was worth $1.5 billion. So his fortune was the same as 2% of the entire GDP at that point. A $200 billion fortune today would be less than 1% of American GDP.

As we stated at the very beginning of this article, for the last 80 years, John D. Rockefeller has been commonly regarded as the richest person in history. After adjusting for all factors, most historians peg John D. Rockefeller's modern equivalent net worth at:

Some estimates peg Rockefeller's fortune a bit lower, some a bit higher. Wikipedia's list of the richest historical figures gives a range of $300 to $400 billion. But generally, the most common number you hear is $340 billion. (Also, for what it's worth, wikipedia's article does not include Elon Musk which is a fairly glaring error.)

$340 billion is exactly the number Elon Musk's net worth ended at today. Here's a screenshot of our real time list of the richest people in the world: 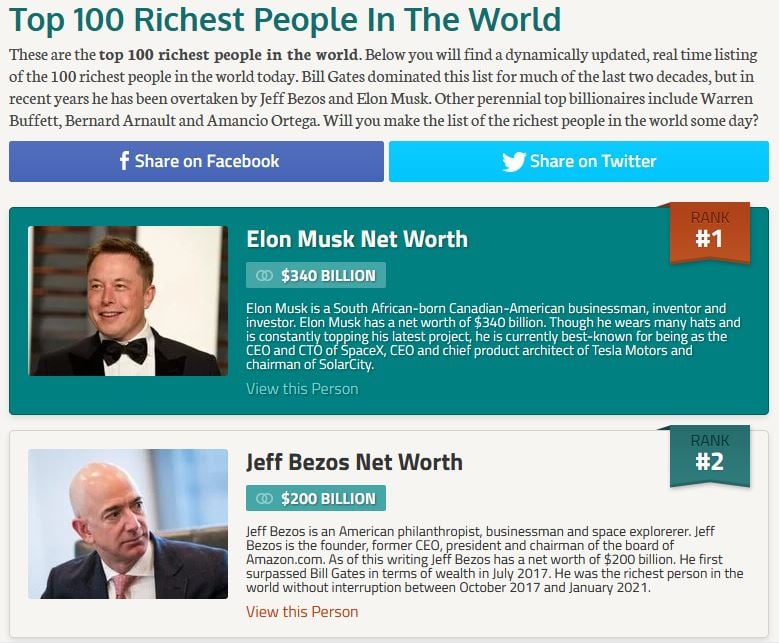 At this moment, Elon is richer than Warren Buffett ($105 billion), Larry Ellison ($114 billion) and Mark Zuckerberg ($118 billion) COMBINED with $3 billion to spare. Those three men are the 9th, 8th and 7th richest people in the world, respectively.

Elon's personal fortune is now worth more than the entire market values of each of the following companies:

Keep checking CelebrityNetWorth in the coming days to find out what Elon's fortune does next. Next stop $400 billion? Or is this the peak and next stop a major correction?