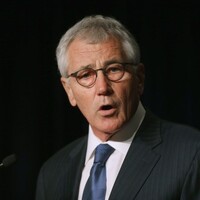 Chuck Hagel Net Worth: Chuck Hagel is an American politician who has a net worth of $5 million. Born Charles Timothy Hagel on October 4, 1946, in North Platte, Nebraska, he is the 24th and current United States Secretary of Defense, serving since 2013. A receiver of two Purple Hearts while he was an infantry squad leader during the Vietnam War, Hagel got back home to pursue careers in business and politics. Initially, he co-founded Vanguard Cellular, the early source of his personal wealth, and served as president of the McCarthy Group, an investment banking firm. Furthermore, he found himself serving as the CEO of American Information Systems Inc., a computerized voting machine manufacturer, while he was also present on a number of boards of directors, including that of Chevron Corporation. A fervent member of the Republican Party, Chuck Hagel first got elected to the U.S. Senate in 1996. He was reelected two times, once in 2002 and again in 2008. Long before his appointment as Secretary of Defense, he also served as a professor at the Edmund A. Walsh School of Foreign Service at Georgetown University, chairman of the Atlantic Council.