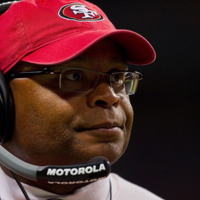 Mike Singletary net worth: Mike Singletary is an American football coach and former professional football player who has a net worth of $8 million. Mike Singletary was born in Houston, Texas in October 1958. He was a linebacker who played at Houston Worthing High School. Singletary played his college football at Baylor where he was a two time Davey O'Brien Memorial Trophy winner, a two time consensus All-American, and a two time Southwest Conference Player of the Year. He was drafted #38 overall in the 1981 NFL Draft by the Chicago Bears. Singletary played his entire career with the Bears from 1981 to 1992. He was a Super Bowl champion and 10 time Pro Bowl selection. Singletary was an eight time first-team All-Pro and named NFL Man of the Year in 1990. He was a two time NFL Defensive Player of the Year and a two time Football Digest NFL Linebacker of the Year. Mike Singletary is a member of the Pro Football and the College Football Halls of Fame. He was the linebackers coach for the Baltimore Ravens from 2003 to 2004 and the assistant head coach and linebackers coach of the San Francisco 49ers from 2005 to 2008. In 2008 he was the interim head coach of the 49ers and from 2009 to 2010 he was head coach. In 2008, he signed a 4-year contract with the 49ers that was worth $10 million. He has also been an assistant for the Minnesota Vikings and Los Angeles Rams. In 2019 he became head coach of the Memphis Express of the AAF.