Kevin Greene net worth and Salary: Kevin Greene was an American former professional football player and coach who had a net worth of $9 million at the time of his death in 2020. He was perhaps best known for his defensive prowess and number of sacks. Unfortunately Kevin died in December 2020 at the age of 58.

Kevin Greene was born in New York, New York in July 1962. He was a linebacker and defense end who played at Granite City South High School. Greene played his college football for Auburn and won the Zeke Smith Award for Defense Player of the Year. He was drafted by the Birmingham Stallions in the United States Football League. Kevin Greene was drafted #113 overall by the Los Angeles Rams in the 1985 NFL Draft. He played for the Rams from 1985 to 1992. Greene played for the Pittsburgh Steelers from 1993 to 1995. He also played for the Carolina Panthers in 1996, the San Francisco 49ers in 1997, and the Panthers again from 1998 to 1999. During his career he was a five time Pro-Bowl selection and a three time First-team All-Pro. Greene was the NFL Defensive Player of the Year in 1996 and a two time NFL sacks leader. He is a member of the 100 Sacks Club and the NFL 1990s All-Decade Team. Greene was an outside linebackers coach for the Green Bay Packers from 2009 to 2013 and for the New York Jets from 2017 to 2018. He is a member of the Pro Football Hall of fame and won Super Bowl XLV as a coach. 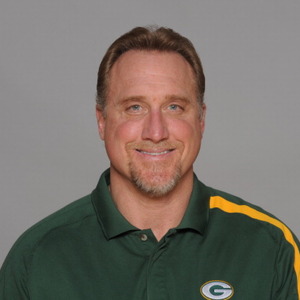