Woodson played his college football at Purdue and was a two time First-team All-American and three time First-team All-Big Ten selection. He was drafted #10 by the Pittsburgh Steelers in the 1987 NFL Draft. Woodson played for Pittsburgh from 1987 to 1996. He also played for the San Francisco 49ers in 1997, the Baltimore Ravens from 1998 to 2001, and the Oakland Raiders from 2002 to 2003. He was a Super Bowl champion and 11-time Pro Bowl selection. Woodson was a six time First-Team All-Pro and was named NFL Defensive Player of the Year and AFC Player of the Year in 1993. He also led the NFL in interceptions for two seasons. Woodson became a cornerbacks coach for the Raiders in 2011. He was an assistant defensive backs coach for the team from 2015 to 2016 before becoming the cornerbacks coach again in 2017. Woodson was inducted into the Pro Football Hall of Fame in 2009. 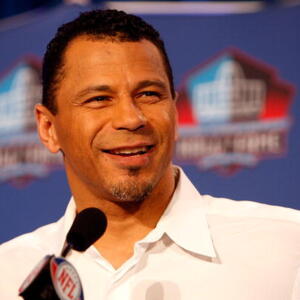