Meet Your New Friend on Wheels, The Rinspeed Budii

Have you ever been driving on a long road trip and needed your buddy to take over for a while? That is what the folks at Rinspeed are now offering with the new car called the Budii. Even though speed is built into the name of this carmaker, the Budii is more about what it can do rather than how fast it can go.

The Budii can drive by itself or the passengers can drive. It has a steering wheel on a robotic arm which can be driven by either person in the front seat. This makes for three possible drivers: you, me, and Budii. The Rinspeed Budii is still in the concept stages but debuted at the 2015 Geneva Motor Show.

The Budii is essentially a self-driving BMW i3. It is an electric autonomous vehicle being branded by the Swiss automaker as a "friend on wheels". There are certainly some interesting and somewhat creepy elements to this vehicle. It will use its artificial intelligence to identify drivers' preferences and habits. According to Rinspeed's Frank M. Rinderknecht the Budii will "keep learning each day". This type of car will surely have supporters but many people are also likely to stay away from it. 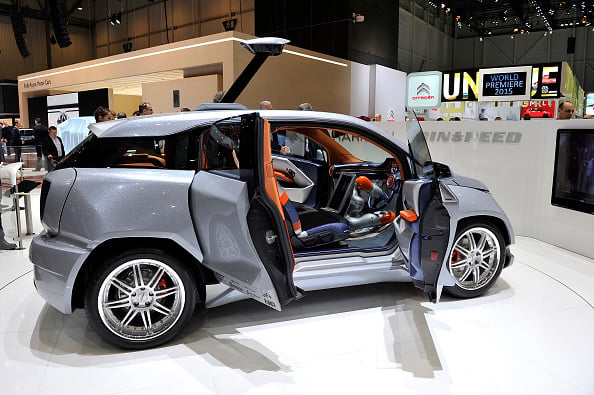 Performance wise it features an electric motor that will be able to go from 0 to 62 miles per hour in 7.2 seconds. The Budii will have a top speed around 100 mph but you might not want it driving much faster than that anyways. It will have an operating and display system that features entertainment, service, and safety functions. This will keep passengers entertained while the Budii drives.

That robotic arm that holds the steering wheel is also supposed to wind up a Manera PowerReserve watch from a Swiss watchmaker that would likely make Monroe from Grimm's head spin. It will have a roof-mounted laser scanner HD camera called Track View. This camera will use 3D technology to map the terrain ahead of the vehicle. It will have a telescoping feature which can raise it to up to look like a periscope on a submarine. Just make sure you lower the camera when going through a tunnel.

Although it is still in the concept stages, the estimated price for the Rinspeed Budii is thought to be around $150,000. It will certainly be expensive to produce all of the odd technology this car needs but at that price some people will actually be able to afford one. The big question here is would you trust your Budii to drive this car?