Michael Fux net worth: Michael Fux is a Cuban-American businessman who has a net worth of $400 million dollars. Michael Fux was born in Cuba and moved to the United States with his family when he was 15 years old. The family struggled initially, and lived in a one-room apartment in Newark, New Jersey with no air conditioning. He knew that he wanted a better life, so he bargained with local car repair shops, and launched his own battery and used tire shop. This led to him developing numerous other ventures, and by his early 20s, he'd managed to buy and sell multiple small businesses. He began working for Sears, and eventually rose to a position as manager. He eventually became the Vice President of Hecht Co. He left Hecht to launch his own business. It was massively successful initially, earning $72 million its first year, but it spiraled downward after that, and he was forced to declare bankruptcy. He started over with his past mistakes in mind, and over the next decades worked with various companies, eventually moving to the bedding industry. After launching and selling multiple successful bedding companies, including BioClinic and Sleep Innovations, he is now the owner and CEO of Comfort Revolution. The two companies generate more than $50 million in revenue combined. In June 2013, Michael made headlines after a mechanic accidentally totaled his brand new Ferrari Enzo on a test drive.

Michael Fux Car Collection: Michael owns one of the most admired exotic car collections in the world. His collection features more than 160 notable cars from extremely expensive Ferraris to 1930s and 1950s classics. In January 2019 Michael put 25 of his cars up for auction at the Mecum auto auction in Kissimmee, Florida. The auction included a 2016 LaFerrari Aperta with just 174 miles, one of only 120 produced. This car was estimated to fetch $6-9 million. The auction also included a 2014 LaFerrari special-order painted fire red with 418 miles that is worth an estimated $4 million. 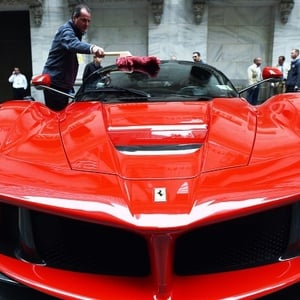