Audi has come out with a brand new supercar called the R8 e-tron. With a name like e-tron, it certainly sounds futuristic, so what does this car have to offer? Is this super luxury car going to be worth the quarter million dollar price tag?

It seems that the good people over at Audi don't like the fact that Tesla Motors has been cutting into their sales with their Model S sedan, and they are now doing something about it. BMW and Mercedes-Benz have already done something with their new plug-in hybrids, which both come in at upwards of $100,000, and now Audi is going over the top.

The Audi e-tron series debuted as a concept car in 2012 and started selling vehicles in 2014, with sales in the United States starting this year. Back in 2009, a concept e-tron that looked like an Audi R8 was shown at the Frankfurt Motor Show, but now there will be an actual R8 e-tron available soon.

The number of R8 e-trons sold to the public will be quite limited. It sounds like the majority of them will be used as test vehicles to gather data for future offerings from Audi. Those that are made available will be done so "in supreme hand-built quality." The R8 e-tron will be available for delivery in 2016 but will not be certified in the United States market. Those US drivers wanting to get one will likely have to settle for Audi's A3 Sportback e-tron, which also looks impressive. 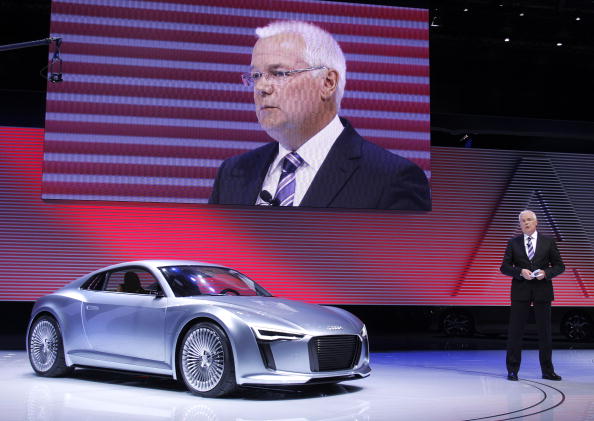 The project for the R8 e-tron has been on-again, off-again, but is now officially a go. Audi has gone through a few different R&D chiefs in the past several years, which caused the project to get pushed back. The car is sometimes referred to as the R8 e-tron 2.0 for being part of the second generation of Audi R8s, so don't let the 2.0 fool you.

This car will be fully electric. It will be able to go for about 280 miles on a full charge which, will utilize the Combined Charging System to use direct and alternating currents to have it fully recharged in less than two hours! It will be able to go from 0 to 62 miles per hour in just 3.9 seconds and will have a top speed of 155 mph. The e-tron version also looks better than the regular R8, with its slimmer tires and small rear lip spoiler. It certainly does look futuristic, as the name implies.

Audi is also planning on releasing an all-electric SUV with a similar range as the R8 e-tron in 2017 as competition for the Tesla Model X. According to Audi, this new model with have "sedan character" and it looks like it could be a crossover sedan/SUV. The push for car companies to release all-electric vehicles means more competition, which will hopefully drive down prices when they become available in higher volumes. So do you think this car is worth the quarter million price tag? If the answer is yes, and you want to get your hands on the new Audi R8 e-tron, you better act fast!