What is Magic Johnson's net worth, salary and career earnings?

Earvin "Magic" Johnson Jr. is a retired American basketball player and entrepreneur who has a net worth of $620 million. After winning basketball championships in high school and college, he was selected the first overall player in the 1979 NBA Draft by the Los Angeles Lakers. He played point guard for the Lakers for 13 seasons. He won the NBA Championship and the NBA Finals Most Valuable Player Award in his rookie season. Johnson is the former president of basketball operations for the Lakers.

Magic Johnson was born on August 14th, 1959 in Lansing, Michigan. His father, Earvin Sr. worked on a General Motors assembly line and his mother Christine was a school janitor. Magic fell in love with basketball at an early age watching his heroes like Earl Monroe. Johnson went to Everett High School where he joined the basketball team as quickly as he could. A local sportswriter coined the nickname "Magic" when at the age of 15 he scored a triple-double with 36 points, 18 rebounds, and 16 assists. The name was solidified his senior year when he led his team to the state championship.

Johnson had offers from every single high profile college but decided to stay close to home and attend Michigan State University. In 1979, Magic led his team to the NCAA finals where they faced Indiana State University and their star player Larry Bird. Their face-off became the most-watched college basketball game ever televised and launched one of the greatest rivalries in sports history. Michigan State went on to defeat Indiana and Johnson was named Most Outstanding Player of the Final Four.

Magic's career was cut short by his 1991 contraction of the HIV virus.

Magic returned to the NBA as the coach of the Lakers near the end of the 1993-94 NBA season. He replaced Randy Pfund and Bill Bertka at the urging of team owner Jerry Buss. The Lakers played well under Johnson's coaching initially, winning five of their first six games, but after losing the next five games, Johnson announced that he was resigning as coach after the season. The Lakers finished the season on a ten-game losing streak, and Johnson's final record as a head coach was 5–11. He said that it was never his dream to coach, so instead, he purchased a 5% share of the team in June 1994.

During the 1995-96 season, then 36-year-old Magic Johnson attempted a comeback as a player and re-joined the Lakers for that season. The Lakers had a record of 22–10 in the games Johnson played, and he considered his final comeback "a success."After the Lakers lost to the Houston Rockets in the first round of the playoffs, Johnson retired permanently. 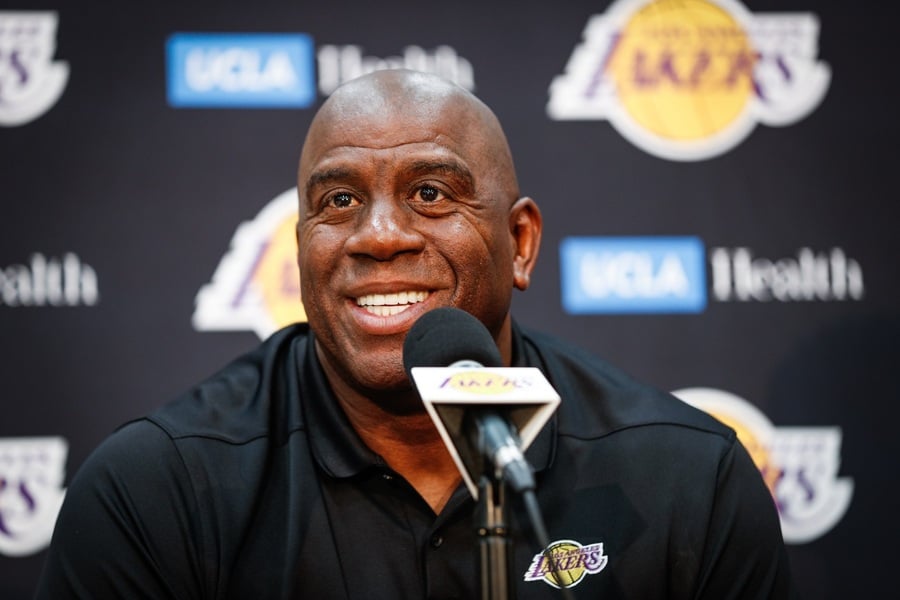 After announcing his infection in November 1991, Johnson created the Magic Johnson Foundation to help combat HIV. Johnson has been an advocate for HIV/AIDS prevention and safe sex, as well as an entrepreneur, philanthropist, and broadcaster. His public announcement of his HIV-positive status in 1991 shocked the public and went a long way towards dispelling the stereotype at the time that HIV was a "gay disease" that heterosexuals didn't have to worry about.

It has not been a quiet retirement for Magic. In retirement, he launched a business empire called Magic Johnson Enterprises that is valued at over $1 billion today and has given Magic a personal net worth of $600 million. Magic Johnson Enterprises owns Magic Johnson Theaters, a movie studio, and a promotional marketing company. In 1994 Magic paid $10 million to buy 5% of The Lakers which he sold in 2010 to billionaire Patrick Soon-Shiong for a reported $50-60 million. In 2010 Johnson also sold his chain of Starbucks for $75 million.

On March 27, 2012, Magic and a group of partners purchased The Los Angeles Dodgers from Frank McCourt for $2 billion. More info here: Magic Johnson Buys The Dodgers for $2 Billion

Johnson married  Earlitha "Cookie" Kelly in a small ceremony in Lansing, Michigan in 1991. The couple has a son, Earvin III (EJ), born in 1992, who is openly gay. EJ appeared on the reality TV show Rich Kids of Beverly Hills. Magic and Cookie adopted their daughter Elisa in 1995. Johnson and his wife live in Dana Point, California and Beverly Hills.

Johnson also has a son from a former relationship. In 1981, Andre Johnson was born to Melissa Mitchell. Andre was raised by his mother, but he spent time with Johnson every summer and later worked as a marketing director for Magic Johnson Enterprises.

During his playing career, Magic earned just over $18 million in salary and several million more in endorsements.

Johnson and his wife own a home in Beverly Hills in the gated section known as Beverly Park. The couple also owns a Tuscan style beach house in Dana Point in Orange County, California. The couple used to own a house in Napili, Hawaii, but it was too far to get to when their children were growing up so they swapped it for the beach house located about 75 miles south of Beverly Hills. 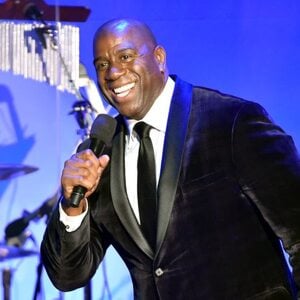