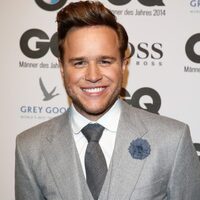 Olly Murs net worth: Olly Murs is an English singer, songwriter, musician and TV presenter who has a net worth of $6 million. Olly Murs has earned his net worth as musician who was runner up on The X Factor series during season six. Murs and his music are represented by both Epic Records and Syco Music. He was born on May 14, 1984 in Witham, Essex his first solo single "Please Don't Let Me Go", was released in August 2010 where it debuted at number-one on the UK Singles Charts. Murs debut album which sold over 108,000 albums copies was released in November 2010. As a Television presenter Murs will co-present The Xtra Factor which is a spin off show from the X Factor series. Olly has a twin brother and one sister he was educated at Notley High School in Braintree, Essex and was a striker on the school's football team. His third studio album is slated to be released in November 2012. Murs is also well-known for his involvement in charity work; he was a member of the BT Charity Trek, of the 2011 Comic Relief Red Nose Day campaign as well as a celebrity version of Who Wants To Be A Millionaire where he won £10,000 for charity.